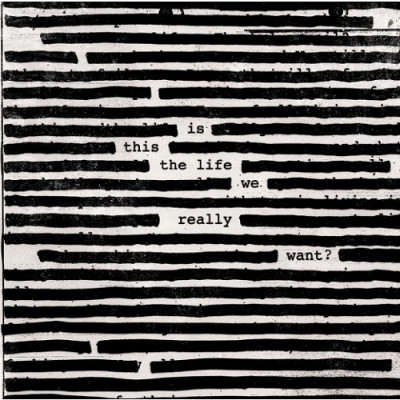 Is This The Life We Really Want? by Roger Waters

It’s been 25 years now since Roger Waters’ last studio album, 1992’s Amused To Death. Many bands are able to fit an entire career within that time frame, but clearly the man who was for many years the creative centre of the legendary Pink Floyd was in no hurry to make another record. Perhaps this is partly because he so plainly believes that Amused To Death is one of his greatest achievements – something that’s difficult to disagree with, given how prescient its subject matter has proven to be. Amused To Death’s treatise on the power of the media to manipulate us, and our seemingly fatal attraction with destroying ourselves, seems more applicable now than it already did over twenty years ago.

Another possible reason for the lengthy delay in recording a new album is that Waters re-discovered the joys of playing live at the turn of the millennium. After struggling to compete with his ex-bandmates in the mid 80s, Waters seemed notably reluctant to go back out on the road. Aside from an extravagant staging of Pink Floyd’s seminal The Wall in Berlin following the breaching of the Berlin Wall, Waters kept a very low touring profile for over a decade. When he finally emerged from his self-imposed semi-retirement in 1999, Waters seemed to have turned a page. Displaying less bitterness towards his ex-colleagues – perhaps partly because Pink Floyd was essentially mothballed as a touring entity after the tour in support of their album The Division Bell that ended in 1995 – Waters dug back into the Floydian back catalogue with relish, delighting fans who flocked to see him play his way through classic Floyd material and his own solo work. Significantly, the lengthy tour – essentially three years long, and immortalised by the In The Flesh live release – provided Waters devotees with the chance to experience a sizeable chunk of Amused To Death played live for the first time. Waters has been an almost constant presence on the touring circuit since, undertaking tours that showcased arguably his, and Floyd’s, most notable successes in the shape of The Dark Side Of The Moon and The Wall. The latter was an enormous creative and critical success, modern technology allowing Waters the chance to put on the kind of audio-visual spectacle he had always wished to present to audiences.

Throughout all this touring activity, new songs would sporadically appear, appended to film soundtracks, tribute albums, or even sometimes performed live. A two-track EP, consisting of ‘To Kill The Child’ and the lengthy, principally spoken-word track ‘Leaving Beirut’, appeared in the mid 2000s, but the much-anticipated full-length album of new material stubbornly refused to appear, despite Waters making frequent reference to his ongoing work in the studio.

Finally, however, an album has arrived. Is This The Life We Really Want?, produced by Nigel Godrich (most famous perhaps for his work with Radiohead). Godrich has done a remarkable job with the production of the album. There’s a great deal of space in the arrangements, and the stately, atmospheric music is largely devoid of knowing flourishes: at Godrich’s insistence, for example, there’s not a guitar solo to be heard, a major break with Floydian tradition. The focus here is on the message, on Waters’ famously incisive lyrics, delivered by the now 73-year old Waters in his usual gruff narrative style. The result is a stark, ascetic record that wears its heart on its sleeve to devastating effect.

The album is replete with references to classic Floyd, ranging from the odd oblique lyrical reference to a knowing use of sound effects or choices of arrangement. From the ‘Speak To Me’-referencing opener, ‘When We Were Young’ to the tense, simmering ‘Picture That’ which is musically the bastard child of ‘Welcome To The Machine’ and ‘Sheep’, the record blends Floydian tropes into Waters’ string-drenched mid-tempo rock in a way that is warmly nostalgic and acts as a shorthand for thematic subtext. It’s surely not mere coincidence that the meter of the chorus of ‘Broken Bones’ evokes Floyd’s ‘Paranoid Eyes’, or that ‘Smell The Roses’ includes an interlude of musique concrete that is reminiscent of Floyd’s early 70s output. Voices from the radio, snatches of the shipping forecast, ticking clocks, explosions and stately piano worthy of the late Richard Wright, Floyd’s keyboard player, conspire to conjure an atmosphere that is plainly redolent both of Waters’ own previous solo work and Pink Floyd’s classic output. Perhaps it is best described as the grandchild of Floyd’s bleak anti-war album The Final Cut and Waters’ own dreamlike The Pros And Cons Of Hitch Hiking: like these two albums, the mood is sober and reflective and the arrangements highly dynamic, switching between a meditative calm and powerful, emotive crescendos. The ghost of Floyd’s classic mid 70s output hovers over the album too, thanks to the use of icy synthesizer that cuts through the otherwise very organic, acoustic sound of the music.

Whilst Waters’ may have mellowed in his personal life, lyrically he’s as incisive and incendiary as ever. As always, his writing takes a humanitarian tack, but his evident disdain for some of his lyrical targets lights up the record. When he refers to “a leader with no fucking brains” or to his horror as “a nincompoop becomes the president”, we’re left in no doubt about his target. Is This The Life We Really Want? seems to aggregate his usual targets: unfeeling politicians, our disregard for ourselves and the planet we live on, rampant consumerism, inequality, entertainment as a distraction from reality and other regular Waters targets are all dispatched in withering style, most particularly on the despairing title track or the baleful ‘Picture That’.

The denouement of the album, however, returns to the theme of The Pros And Cons Of Hitch Hiking: the idea of a deep and abiding love as a redemptive force. The last three tracks on the album flow together into a ten-minute suite, a languid ballad built around an exquisite soundscape that builds into crescendos that are reminiscent of the grand finale of The Dark Side Of The Moon. Waters talks of a female muse destroying the part of him that “sat in the corner watching TV / Deaf to the cries of children in pain” and dwelt in “silence, indifference: the ultimate crime“, realizing that “it would be better by far to die in her arms / Than to linger in a lifetime of regret.” piece serves as the perfect ending for an album that takes a very dim view of our progress, or lack of progress, as a species. It is a reminder that we’re capable of beauty, of great love – that for all our sins against each other, we can choose to be better. Given that it has taken Waters twenty five years to make this record, listeners could be forgiven for wondering aloud whether this record is Waters’ last. If it proves to be so, this final tri-partite suite is the perfect swansong for an artist whose simultaneous love for, and distrust of, humankind has informed so much of his work.

Like Waters’ previous work, Is This The Life We Really Want? is likely to prove divisive. Those who prefer musicians to steer clear of politics are not likely to enjoy it, and the decision to avoid the guitar solos and extended instrumental sections that typify much classic Floyd may leave some feeling that the album is too understated. However, for those who enjoy Waters’ lyrical finesse, bold imagery and the unhurried, highly emotive slow-burn of some of Pink Floyd’s less frequently sailed oceans, this is nothing less than essential; proof, were it needed, that Pink Floyd’s creative mind remains in rude health.