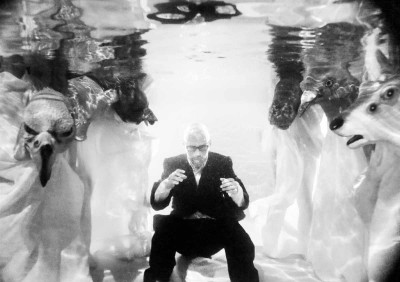 It’s not that often that actual surprises come about these days.  The internet is a bit of a bugger for announcing works in progress months in advance, or official teasers and streams render the whole point of pre-ordering utterly redundant when the piece of plastic you’ve shelled out in expensive anticipation has been listened to and discussed long before the postman turns up.  “Hello!” then, to the new album from Moby and the Void Pacific Choir, barely announced and costing a mere act of kindness.

A companion to last year’s These Systems Are Failing, Moby’s new offering More Fast Songs About the Apocalypse is a half-hour or so of, well, more fast songs about the apocalypse.  Anyone who has been following Moby’s thoughts over social media of late will be well-versed on his stance on the increasing madness that makes up his own political leadership, and it’s a sentiment that is sadly well-mirrored on this side of the Atlantic also.  This album represents both the frustration of the situation as well as the joy of finding so many kindred spirits in opposition.

Opening track ‘Silence’ is, not to put too fine a point on it, anything but.  If the cranky guitar doesn’t get you, the hugely distorted bass drum noise might.  If that doesn’t, the euphoria of the chorus probably will.  If that doesn’t, turn it up and try again.  It’s a filthy record and quite rightly so, as when all these myriad grimy layers come together it’s a beautiful cacophony.

Despite falling hot on the heels of its predecessor, More Fast Songs About the Apocalypse marks a logical progression for Moby and his current band.  It’s faster, angrier, more reactive and so much more exciting than an antecedent which already contained these qualities by the bucketful.  Above all, it’s so bloody danceable – reminding me of sweaty ‘90s clubs that crossed over metal, punk, industrial, rave and anything else that just felt right to be blasted out in community.  This is helped along by the whole glorious old-schoolness of this; everything that Moby has soaked up through his career and earlier has found a home in this messy mixture of everything all at once.

There’s even room for a spot of Pop here and there, ‘I Wait For You’ retains the dirty protest of the rest of the album but its hooks are shinier and sharper, and  it will be banging around the inside of your skull long after it’s finished.  Or at least as long as the bleak and catchy gothic existentialism of ‘There’s Nothing Wrong With the World There’s Something Wrong With Me’ starts up and makes its way right under your skin.

I have no idea if Acid Punk was ever an actual thing back in the day, but it is now, because “Faith no More on the wrong speed” would be a silly name for a genre, however accurate the nomenclature may be.  While it can be argued for an age as to whether ‘A Happy Song’ actually is, but it mixes big electronic sweeps and squelches with an overdriven riff and largely unintelligible sloganeering closes More Fast Songs About the Apocalypse with a massive grin on its face.

So.  “This act of kindness”, you ask?  The album is free (and comes with its predecessor) from https://mobyandthevoidpacificchoir.com/.  No money is requested, merely a suggestion that a donation is made in the stead of any purchase to any charity of your choice.  It’s up to you, but to be honest if you listen to this and don’t feel the need to try to make a difference, or give a small amount to someone who is in a better position to do so, then this record isn’t for you anyway.