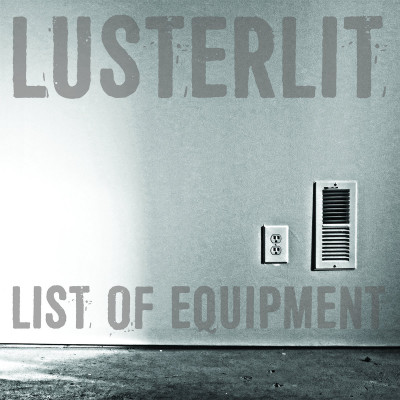 Lusterlit are Susan Hwang and Charlie Nieland (Charlie some of you might remember from Her Banished Grace), both are part of a songwriting and performing collective based in Brooklyn, NYC, called the Bushwick Book Club, founded by Susan Hwang and whose works draw on inspiration from literature of all kinds. This is important because for their first EP, the very pleasant and tunesome List of Equipment, Lusterlit have taken a number of literary works by Julia Child, Cormac McCarthy, Jonathan Lethem and John Wyndham.

As it came out in March, you might have missed the EP, but now as we head towards summer in the Northern hemisphere, it’s probably the perfect time to get acquainted with this charming record (which will easily sit alongside your holiday reading as holiday listening). There are some darkish themes here for sure, but the production is crisp, Hwang and Nieland’s voices gorgeous, and the whole thing bubbles along spiritually somewhere between indie rock and goth, with a touch of world music thrown in. Think loosely along the lines of Love and Rockets, but with added accordion and Korean drums.

So five tracks about books, and first up is ‘Ceremony’, inspired by Cormac McCarthy’s dark anti-Western, Blood Meridian, like the book the song is drenched with blood and dark majesty. Hwang’s voice really comes into its own here bringing emotional nuances to each twist and turn of the lyrics, and I defy anyone to hear the opening few bars of the song without sitting up as it’s a track which demands your attention, full bodied in sound dynamics, with sinister gothic undertones.

‘List of Equipment’ follows, based on Mastering the Art of French Cooking by Julia Child (possibly the book is best known to you from the Meryl Streep film Julie & Julia). In some ways a cookery book may seem an unusual choice for inspiration – but why not – cookery is itself a work of art, building layer upon layer of elements, and the song is much like that too, constructing delicious melodies and harmonies to an impressive whole.

John Wyndham – master of eco-Sci-fi – provides inspiration for ‘The Day of the Triffids’, building, like the book, a sense of foreboding and dread before having to almost accept that we are perhaps not masters of the world that we inhabit. We also get a chance to hear Nieland’s elegant whisper of a voice – his narration haunting each note we hear.

FInally, the last two tracks draw from Jonathan Lethem’s Brooklyn odyssey The Fortress of Solitude: ‘Flight’ and ‘Genius of Love’. I’m probably least familiar with this book of the four, so can’t really say how the song reflects the meaning of the novel but both songs pulse along with verve and optimism.

It is though, a really confident and well executed debut from this duo, If nothing else the EP might make you go off and find these books – which is no bad thing at all. I urge you to give Lusterlit a go at your earliest convenience.