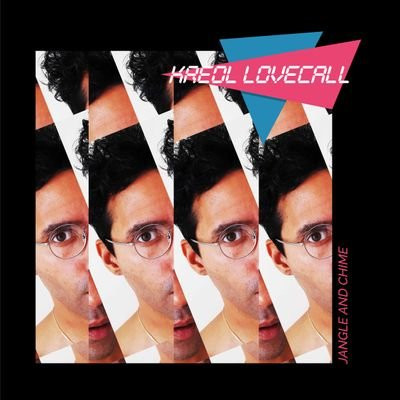 Jangle and Chime by Kreol Lovecall

These are complicated times, and they seem to be getting worse. It’s almost getting to the point where we are looking desperately back to “simpler” times when all I had to worry about was nuclear war and the far right wing in our schools, these days we seem to have all that again, but with unintelligible economics to go with it.

I saw Kreol Lovecall supporting and accompanying Duke Garwood back in February, and was very quickly taken with what was going on, albeit after a brief initial moment to adjust. One man, a guitar, an electronic backing (“a band that doesn’t argue back”, as he put it) and a projector, playing music and singing about things I’d not heard for a long time. Not only that, it’s a timely reminder that it’s possible to put across some rather dystopian and angry sloganeering out there when there’s a decent groove behind it.

Jangle and Chime seems to have been designed to have that early 1980s feel from the outset; the cover art with its calculator font and pink and blue angular stylings have a very definite aesthetic tie to this period, and this carries on as soon as ‘Time’ begins with the very definition of setting one’s stall out. Choice keywords and pleas for unity abound, stapled onto a backing that gave me the first impression of when John Otway appeared on the Young Ones.

There are a few more strings to Mr Lovecall’s bow than that, although the main conversational topics remain that of observations of unity and division. ‘Not Composites’ recalls Thomas Dolby’s senses of both rhythm and the incredulous with its tale of celeb culture, “this world where we venerate the reprobate”, closer ‘Emojis and Memes’ is a jaunty affair about the ways in which we all simplistically express ourselves, married to a sense that we’re all a bit more drone-like than we’d probably like to think.

Nowhere is the mirror held up so starkly however than with the ultra-personal and infectiously funky ‘True Golden Dawn’, where Kreol (real name Jonathan Richards) looks back on his own childhood and the racism he grew up with from both sides, wondering if the kids who used to spit in his face are now in the police. It would all come across as uncomfortable listening if the subject wasn’t treated with such straight “this is how it was and this is how it is” manner and an irresistible coda.

This is all stuff that means a lot to the performer, and hopefully to the rest of us. As with when these subjects were first widely broached in popular culture, it offers up more problems than it does solutions and it’s rather sad that things from 30+ years ago are still valid (and largely undiscussed), but when politics of the self are so undervalued these days in favour of voter-demotivating economic figures and percentages, it’s good to be reminded of what else is important. It also helps that these reminders are put across in such a worthwhile fashion.