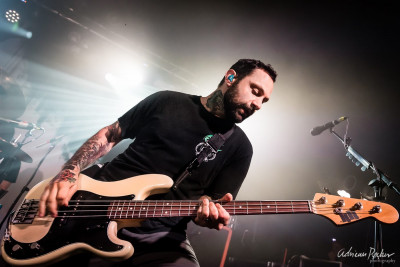 I grew up with the intent to ruffle feathers. When people are annoyed, that's when I dig in deeper.

Rising from Chicago’s underground punk scene in the late 90s, Rise Against have taken the punk world by storm. Their fiercely progressive views, ferocious melodic hardcore sound, and subscription to the straight edge lifestyle put them at the bleeding edge of left-wing punk. Nick Dunn sat down with bassist Joe Principe ahead of their intimate gig at The Garage in Highbury to discuss politics, punk, and their upcoming album Wolves.

(((o))): What made you decide on launching the album with such an intimate show?

Joe: We were already coming here for press, we felt like making the best use of our time. It’s a great way to promote the record, and coming from the punk and hardcore scene we love intimate shows. We’re not able to do small shows like this a lot so we felt like we should do something for our fans and ourselves.

Joe: Yeah. There’s nothing like that interaction, the intimacy of a small show.

(((o))): It’s a nice atmosphere as well – a different ball game from something like Iron Maiden.

Joe: A show like that should be stripped down, more visceral, no theatrics because we don’t do that but less of a production.

(((o))): Is there any central message to Wolves that you’d like to discuss, or highlight?

Joe: I definitely feel like the theme overall stems from the song ‘Wolves’ is a rally cry: “band together, use your voice to inspire change.” I grew up listening to records from a scene, it was hardcore, but the bands were ‘posi-core’ with positive messages, a source of inspiration. It was the mentality of ‘don’t wait for something to get done and be apathetic, do something, fucking yell at somebody, do something’ and that’s what the song ‘Wolves’ is about and the theme of the record.

(((o))): What would you say the biggest musical influence on this album has been? Would you say your influences have shifted, or widened, over the last few years?

Joe: For me, it’s weird. I never look at it that way. Subconsciously, I’m sure it creeps in. I grew up in the 80s, and I was very inspired by punk rock and hardcore, but also by New Wave, like Echo and the Bunnymen and The Cure. I used to steal [my older sister’s] cassettes and listen to all this stuff.

Joe: Nice! For me, a song on our new record called ‘Politics of Love’ is definitely inspired by 80s New Wave, so that crept in. I didn’t think about it, until my sister said it sounds a bit like older R.E.M., and the basslines of The Cure. Definitely subconscious though.

(((o))): Rise Against are famous for being straight-edge and vegetarian, and the video for ‘Ready to Fall’ is themed around animal rights. Would you ever consider doing a song, or an album, focussed on animal rights?

Joe: We’ve definitely done songs, like ‘Collapse’, but we generally don’t write about one topic for a whole record. Tim writes lyrics from a personal perspective on everyday life, so that’s why you get songs that are rooted in politics, rooted in animal rights, socially aware topics, even love. Even musically, I feel like if we’re doing an all-fast-hardcore record, or an all mid-tempo record, it would get boring.

(((o))): It’s good to have variety, a lot of bands have a sound and they stick to that sound so all the songs blur into one.

Joe: Especially when they get to their eighth or ninth record!

(((o))): Would you say there have been any lyrics or songs that have been cut for being too extreme? Is there a ‘too extreme’ for you?

Joe: Not for me. I grew up with the intent to ruffle feathers, when people are annoyed that’s when I dig in deeper. By nature, finding punk rock – and even skateboarding was along the same lines, someone would say “You can’t skate here, well fuck you, I’m going to skate here more!

Joe: No. I mean, as long as it’s not hurting somebody physically. As long as it’s along the lines of my ideology, my ethics, then I say all bets are off. I’m not shy to speak my mind.

(((o))): So there’s never been a time where you’ve written some music, and Tim’s brought lyrics along that you’ve thought are a bit too “on the nose”?

Joe: He’s never written a song that I’ve disagreed with, which is pretty remarkable after being in a band for 17 years. We all came from the same scene, especially Tim and I growing up in Chicago, going to the same shows. That’s why we both found punk rock, we felt like fish out of water in the mainstream world, which is why most people gravitate to the punk scene: it’s a place to fit in. When we started the band, it was an unspoken thing. When he started writing lyrics for this band – the band was started before we had a singer – my intent was to carry the torch for bands like 7 Seconds and Bad Brains and Minor Threat: high energy, positive message and Tim started writing lyrics along those lines, and it was perfect. Everything is unspoken!

(((o))): How far do you agree that punk and hardcore are inherently political genres?

Joe: It’s definitely inherent where punk rock, the movement, was a reaction to the bullshit that was going on in the rock world. The Ramones started because there were bands doing five-minute guitar solos and they thought ‘Fuck that!’ They took the torch of the earlier Beatles work, those straight-to-the-point love songs, and they sped up the tempo, and it was a no-bullshit type of music.

Joe: Definitely, but I always viewed the music as a political statement. Even The Clash were very political lyrically. The politics was an all-encompassing reaction to mainstream, and when politics crept into punk-rock it was the same thing. It was a platform for people that didn’t fit in, it gave them a platform for them to speak their mind. Bands like the Dead Kennedys were so political – it was the first time that Jello Biafra had a platform to speak from where it was accepted and he had an audience. It’s effective because maybe 70% of the people that heard the Dead Kennedys thought he was preachy. The other 30% thought ‘This guy is on to something, I agree with it’ and those people went on, became lawyers and doctors and people in society.

Joe: Yes! Sorry, that was a very long-winded way of saying ‘yes.’

(((o))): I suppose you have had this question a lot, but given how politically outspoken you are as a band, what do you make of recent political events, both in the US or abroad, generally?

Joe: I don’t know what to say as far as the United States is concerned. It’s scary. Every day, you think ‘it can’t get any worse’, and it does. Surely there’s somebody out there that is going to set the impeachment process forward? It’s like ‘who the fuck is policing, who’s going to shut him up?’ It’s accepted, the norm now is to say conflicting statements in the same paragraph, and it’s OK.

Joe: There is a BBC documentary about that mind manipulation, and they traced it back to Russia, and it’s a way of controlling the population where if you say conflicting things enough the audience are so confused they give in. They almost become numb to what you’re saying.

Joe: Exactly, and this documentary compares and contrasts Trump with Putin and the way of the  manipulation. It’s very scary.

(((o))): What is it about politics, and political situations, that motivates Rise Against to write about them? Is it tapping into punk’s inherent political nature, or is it that politics is a subject that galvanises you?

Joe: For me, I feel like I grew up very level-headed and the idea is to treat everybody fairly and be mindful of our planet, people around us. To me, and maybe it’s unfair, it’s obvious what we’re singing about. Take care of your planet, take care of people, don’t judge people on colour of skin, sexual orientation, that to me makes perfect. That’s what inspires the lyrics.

(((o))): How much do you keep up with the Chicago music scene, and are there any bands you’d like to shine a light on? Either from the underground or in the mainstream?

Joe: We’re on tour so much, and just recently I felt very out of touch with what’s happening in Chicago. Growing up, I was at the same clubs every week, but there’s so many bands popping up. I literally can’t think of one band name right now, which is terrible!

(((o))): Finally, as a bit of fun, if Rise Against was a university course, what books would form the essential reading list?