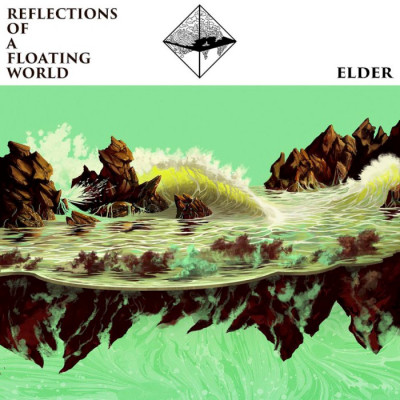 Reflections of a Floating World by Elder

There are few things more rewarding as a music fan than watching a band evolve from modest beginnings into something special. Few who heard Elder’s debut full length a decade ago could have predicted the path they’ve followed since – anyone who claims to have prophesied their metamorphosis into the heavy-prog rock colossus they are today is either a liar or certifiably crazy. But they made a statement with follow up Dead Roots Stirring in 2011 and affirmed it with their breakout album Lore in 2015 – this is no ordinary stoner rock band. Unlike many of their peers the size of their ambitions exceeded the size of their riffs.

On each album they’ve made huge strides forward. First they traded the fairly bog standard doom/stoner of their debut for the filthy, hard edged rock epics of Dead Roots Stirring. Then they went cleaner and more complex, leaping headlong into psych/rock territory for Lore. By contrast Reflections of a Floating World is perhaps their least radical departure so far. Rather than overhaul their sound once more it’s an affirmation of the vision explored on Lore, a refinement of their progressive elements. There is one major change however; an extra guitarist is added to the fold. They pushed what they could do as a 3-piece on stage as far as it could possibly go on Lore – with the addition Michael Risberg (also of guitarist/vocalist Nick DiSalvo’s side project Gold and Silver) they’ve freed themselves from that burden. They’ve also drafted in another musician in Mike Samos to add texture to their sound in the form of the keyboards that lift the lilting mid-section in ‘Thousand Hands’ or the droning 70s organ sounds of ‘Blind’. With their horizons opened up by the new additions, as well as their own evolution as musicians, they’re emboldened to go that little bit bigger and braver than before.

Never a band who could count brevity among their virtues Reflections of a Floating World sees them tilt fully into prog territory. Theirs is now a world where a song like opener ‘Sanctuary’ can fade out 6 minutes in only return for another 4 of fast paced riffery. And then fade out a second time and come back for another few minutes of majestic denouement. Thankfully not all the transitions are that blunt; instead each track’s myriad sections slowly unravel, with 5 of the 6 songs here clocking in at over 10 minutes. Their are guitar heroics and huge payoffs a plenty – the sublime crashing climax of ‘Sanctuary’ being a case in point – but the road to get to them is often far more interesting. If the critical success of Lore brought a temptation to streamline things it never once shows.

‘The Falling Veil’ starts with an almost Floydian drift of drones and slow arpeggios before inevitably taking flight with awkward interlocking guitar riffs. They may have long since transcending the genre, but their stoner rock roots still show; despite trading fuzz and grit for a certain grace they’re still heavier than most progressive bands, occasionally coming across like psych-stoners Earthless (especially with DiSalvo and Risberg throwing out the kind of guitar solos that could kickstart a space program), only with their riff n’ go improv style replaced with meticulous structure. But the riffs are decidedly more reminiscent of Yes or King Crimson than Kyuss or Sleep now. ‘The Falling Veil’ isn’t a great deal removed from the sound on Lore – it even directly references that album’s opener ‘Compendium’ with a couple of guitar lines lifted from that track – but it’s richer in detail, full of flourishes that signify how far they’ve come in two short years. And the crescendo that comes at around the 9 minute mark is perhaps the most cathartic thing they’ve put to tape, the kind of peak most post-rock bands would sell half their pedal boards for.

For all their technical prowess it’s fair to say that the vocals have in the past been the band’s weakest link. DiSalvo always came across as the guy who decided to sing because someone had to rather than someone dying to let his voice soar. The instrumental passages are so long these days that’s almost a moot point – if they dialed the vocals down any further they’d be an instrumental band. But when he does show up DiSalvo sounds more comfortable in the role than on previous releases. When he returns after a long, winding instrumental section to bellow the song title on ‘Sanctuary’ it’s a cathartic fist in the air moment that threatens to be explosive when played live. And on ‘Blind’, after an opening sections of distorted drums and followed by a bout of mid-paced riffery, the song drops out to leave only his reverb treated vocals and an organ. It’s a confident move from DiSalvo and new look for Elder, with the riffs kept a little simpler and a retro sounding organ fleshing out the sound, making for something still heavy but a little more more breezy and subtle. But of that makes it sound like a more accessible Elder bear in mind it’s also the longest song here at 13 minutes, a run time it perhaps doesn’t quite earn with a little more meandering than is entirely necessary.

There’s only one real misstep here though; ‘Sontagg’, an aimless krautrock influenced jam that sounds completely out of place. Perhaps it was meant to give breathing space in an intensely paced album, but instead it derails it completely, tossing aside the precision that mark the other tracks for something wayward and unsatisfying. It would make for a neat b-side/bonus track, and does sound pretty nice in isolation, but it feels like an unwanted interloper on an album proper. It leaves closer ‘Thousand Hands’ with an uphill struggle to regain the momentum lost, an excellent track full of soaring guitar lines that spiral into the stratosphere sadly dampened by context.

On Reflections of a Floating World Elder have a curious record: it might not be their best album but it’s still the sound of them getting even better, it’s not their most cohesive work, but it contains a dizzying highlight real of some of their finest moments to date. It’s a slow burner – on first listen fans may find it too ponderous compared to the more instantly impressive work of old and newbies drawn in by the hype might wonder what the fuss is about. But given time it unveils its secrets, the melodies hidden in the maelstrom are drawn out on repeated listens. And most excitingly it feels like a transition to a bigger, fuller sound as a four piece, full of suggestions at future horizons and potential triumphs to come. It’s been rewarding watching Elder grow into one of the most consistently impressive guitar bands on the planet. And for them the future has never looked brighter.