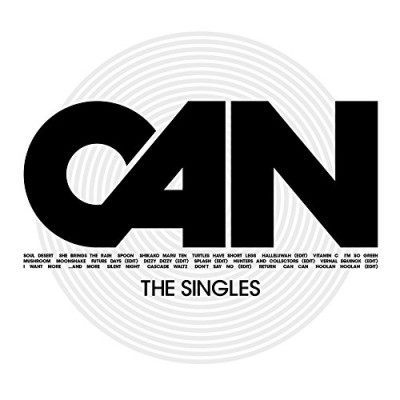 The Singles by CAN

CAN need no introduction, but if it’s an introduction to CAN that you want then this new collection of singles is a good place to start. It’s odd really because I’ve never thought of CAN as a singles band – of course they did release singles, of that there is no doubt – but the majority of the singles released in this collection was at a time when I was more concerned about being chosen to be milk-monitor and hand out free milk at primary school rather than consider the interplay of spool and tape editing and motorik drumming*, not even I was that precocious a child.

I got into CAN in my mid-20s firstly through the Cannibalism collections and then the albums proper thereafter. I’d long forgotten the short-form edits of many a CAN track through endless exposure to Tago Mago or Ege Bamyasi – and I’d long given up the hope of seeing the band following the death of Michael Karoli in 2001. CAN also occupied that strange netherworld of being something of a cult amongst myself and friends where post-war German rock was concerned –  they were unique, different, and for God’s sake, even your Granny knew who Kraftwerk were – but CAN didn’t as far as I knew at the time, trouble the UK charts with many single releases.

It was, however, a single release that provided my gateway into the strange and delightful world of this band. I was probably watching one of those ‘Rock at the BBC’ type compilation programmes when CAN appeared (on probably their only Top Of The Pops session) with ‘I Want More’, which must have suitably intrigued me to check them out. It’s all the more incredible as ‘I Want More’ is totally atypical of CAN’s output. I went from that to near on twenty minutes of banging and shouting with ‘Aumgn’. But I loved those long album cuts, (even the claustrophobic ‘Aumgn’, countered by the equally long, but blissfully hypnotic ‘Halleluwah’), the extended grooves, it all felt so good. Of course, I later found out that the normal practice for this band was to jam extensively, record those sessions, then edit them into a useful format. By extension, it seems a natural progression to edit some of these tracks down into 7” formats for the pop-pickers. Indeed, if you own any of the Cannibalism collections, which I mentioned near the top, you’ll have heard some of these 45rpm single edited versions already.

The question then, must be, do you need another CAN collection? Of course you do. It is the first time that all the CAN singles have been brought together in one place. For completists you get to hear rare singles such as ‘Silent Night’, and the charmingly playful ‘Turtles Have Short Legs’, which never appeared on a studio album. Also, interest in CAN has risen due to the announcement, last year of The CAN Project, a supergroup curated by Sonic Youth’s Thurston Moore featuring CAN stalwarts Malcolm Mooney, Irmin Schmidt, Jaki Liebezeit. Unfortunately Leibezeit’s death on 22nd January this year robbed the world of one of its most important drummers and for a while put this project in doubt.

The CAN Project did go ahead however with many of the faithful making their way to a sell out show at London’s Barbican in April (I couldn’t go but a friend texted me photos of what looked like a cracking evening) and any Echoes and Dust readers swinging by Glastonbury this year would be wise to check out the project’s festival set there. 2018 will also see a two-volume CAN book published, providing further insight into the legend, so given all of the above the currency of this group is rather high.

The Singles takes in every era and line-up of the band, starting with ‘Soul Desert’ and ‘She Brings The Rain’, which highlight – if nothing else – the tremendous range of original vocalist Malcolm Mooney: the former a hysteric near falsetto, the latter a smoky croon from the band’s American soul shaman. Indeed, these two opening tracks alone should point the listener to the sheer diversity of music that CAN would go on to cover through their active years and through the course of this compilation.

Mooney’s departure made way for Japanese busker Damo Suzuki’s unhinged vocal experiments. The wonderful ‘Spoon’ kicks-off this era on the collection, followed by it’s little heard b-side ‘Shikako Maru Ten’. Followed by ‘Turtles Have Short Legs’; recorded during the Tago Mago sessions but unable to find a home on that album, ‘Turtles…’ is CAN at their most playful. It’s something of a Beatles pastiche but behind the simple lyrics (a repeated “Turtles have short legs, not for the walking / Want to have a cigarette, just king-sized / Well, we can find it out, well, we can find it out”) are layer upon layer of musical complexity and, goddamn it, fun.

The next quartet of singles (‘Halleluwah’, ‘Vitamin C’, ‘I’m So Green’, ‘Mushroom’); provide an incredibly satisfying introduction to the experimental funk blitzkrieg of Tago Mago/Ege Bamyasi, recordings which pre-date Madchester by about twenty-years but would have fitted right in with anything pumped out of Factory Records. The 7” cut of Halleluwah loses nothing of it’s hypnotic brilliance (although you may feel short-changed if you have an affection for the long version). ‘Mushroom’s hypnotising bad acid-trip vision of the apocalypse remains solidly driven and paranoid. ‘Future Days’, Suzuki’s swansong, ties up this section of the collection.

From here we move forward to when Michael Karoli took up the slack on vocal duties (in addition to providing the exemplary guitar and violin work for which, at the time, he was best known). From Soon Over Babaluma/Landed onwards the band became more focussed, the production slicker, but losing none of their creative or experimental impetus. The five tracks that cover this period (‘Future Days’, ‘Dizzy Dizzy’, ‘Splash’, ‘Hunters And Collectors’, and ‘Vernal Equinox’) are all edits of fuller-length album versions.

‘I Want More’ / ‘…And More’ – where I came in with CAN – are a return to songs specifically written as singles. Flow Motion – the album length mothership from which these singles came – wasn’t particularly well received by the CAN faithful at the time. One can only assume the band miming the songs on Top Of The Pops further heightened their ire. But then again an experimental band reaching No. 26 in the UK charts was virtually unheard of at the time, and besides, Bowie was going all weird and Berlin-esque with Station to Station. Flow Motion also featured the curious reggae-in-waltz-time experiment of ‘Cascade Waltz’, which also features on The Singles. Bowie’s reggae experiments are perhaps less well known.

Admittedly, things get a bit patchy after ‘I Want More’ perhaps reflecting some of the unevenness in CAN’s output during their latter years, and the collection finishes with ‘Hoolah Hoolah’ – something of a last gasp, but a welcome return for Malcolm Mooney on the Rite Time album.

Singles collections can sometimes be something of a curate’s egg; amongst the fan base everyone has a favourite era and that’s no different here. However, no particular era is favoured over another; less successful singles are presented alongside intriguing rarities. I personally would go as far as saying if you got The Lost Tapes back in 2012, then The SIngles works as a perfect companion piece – both fill in the gaps between the previously released material and studio albums. If you’re a fan, you’ll probably get it anyway despite what I may say.

Above all – and totemic singers of Mooney & Suzuki included – the partnership between Michael Karoli, Jaki Liebezeit, Irmin Schmidt, and Holger Czukay is probably one of the most enduring, far reaching, and influential collaboratives of the late Twentieth Century, their influence on post-punk, dance music, and post-rock is profound. If nothing else The Singles give you an ur-text of where the genres we enjoy today originated. Check them out. Then check out Tangerine Dream, then check out Neu, then ask your granny for her Kraftwerk records….

*By law, any CAN review must feature the phrase ‘motorik drumming’