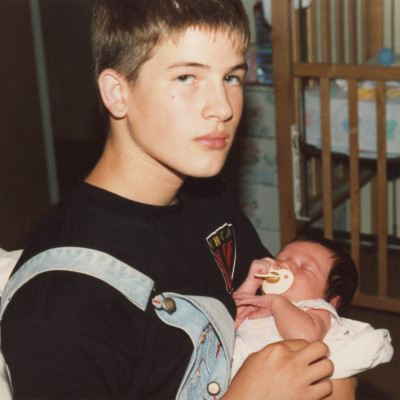 Some artist’s origins can be traced back to distinct moments. Buying their first guitars. Bumping into a stranger on the first day of school. Brotherhood. In the case of Brooklyn four-piece Big Thief, theirs was the moment a railroad spike from a tree-house fell onto lead vocalist Adrianne Lenker’s head.

On sophomore album Capacity, Big Thief scale down their sound, developing from a dissonant mix punctuated by reverb-heavy solos to more structured, simpler melodies that highlight the versatility of guitarist Buck Meek’s fills. Make no mistake however, this is still an album led by Lenker’s softly-spoken vocals, its most powerful moments created when she cuts loose, notably in the lullaby to her mother ‘Coma’, ably supported by the first sustained use of keyboards on a Big Thief track.

Equally encouraging is the burgeoning lyricism, as Lenker begins to root each song not only into a specific place and time, but clearly addresses each to a specific individual. As the album opens, we are transposed to a post-coital embrace, as ‘Pretty Things’, reminiscent of a Leonard Cohen number, addresses an abusive lover, “Men are baptized in their anger and fighting / Their deceit and lies / I’ve got lips like sugar”.

Whilst second track ‘Shark Smile’ opens with an imitation of a Nirvana-tribute warming up, it is quickly replaced with a charming piece of Americana. Meek’s guitar comes to the fore, his fills amplifying Lenker’s adaptation of Thelma and Louise, asking the listener “Who wouldn’t ride on a moonlight line?” as her vocals tread the line with spoken word.

It’s interesting that Capacity strikes the listener as such a development, Big Thief having finished recording before their debut Masterpiece was even released. Yet this second album could almost be considered a summer record, the middle of the album producing a strange brand of psychedelic indie played at x0.5, highlights including Meek’s delta blues inspired accompaniment to ‘Watering’.

Blurred sketches of memories give way to the most powerful anecdote of the album in centerpiece and first single ‘Mythological Beauty’. Lenker’s recollection of her traumatic tree-house accident, seen through her mother’s eyes, digs into the essence of what it is to be a parent. Has the maternal bond been more clearly expressed than the anguished line “You held me in the backseat with a dishrag, soaking up blood with your eyes”? Says Lenker, “I’m not quite sure if I’m writing the songs from myself to my future child, or to my inner child, or from my mother to me.”

From this moment on, it quickly becomes apparent that Capacity is an album based on introspection. With the exception of playful George Harrison inspired ‘Objects’, Lenker’s lyrics constantly questions herself and her decisions. Album closer Black Diamonds, driven by the catchy bass hook of Max Oleartchik asks “Should I let you make a woman of me / Should I let you take the mystery from me?” as the building synth hints at a Meek solo, before teasingly receding, following the lead of the song’s subject.

Yet Capacity’s best moment is reserved for the penultimate song ‘Mary’, a dissection of sororal love. It’s epic sounding opening takes inspiration from first-album stalwarts ‘Paul’ and ‘Real Love’, before the lyrics of a tender letter to a former lover take the fore. An innate sense of a time lost permeates throughout the track, from lines such as “You’ll kiss me like you used to in the January night” to the aching piano solo, to the reserved position of the vocals in the mix.

By exploring what lies unexpressed on the margins of relationships, Big Thief have produced a remarkably personal record, one of the finer albums to recently emerge from the folk-rock American tradition. Capacity possibly lacks some of Masterpiece’s accessibility, yet in album highlights ‘Mythological Beauty’, ‘Mary’ and ‘Black Diamonds’, they have created a soundtrack to rain-flecked windows, fireside spirits and emotional trauma. As Lenker implores in ‘Haley’, “If you ever wanna come back / You know my arms are always open” Capacity is an album that gets greater with each listen, confronting taboos, whispering vignettes, and necessitating contemplation. It is an album not only able to rub salt into wounds, but salve them.