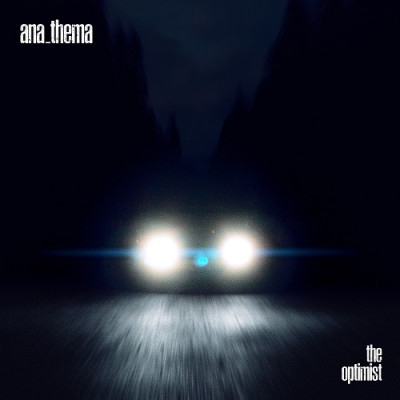 The Optimist by Anathema

In 2001, Liverpudlian rockers Anathema released their sixth album, A Fine Day To Exit. A true concept album in the classic sense, it told the story of a man who, feeling trapped by his day-to-day existence, decided to leave everything behind and simply walk into the ocean. That album ended with a measure of relief as the protagonist was heard walking away, shaken, from the sound of the rolling tide, muttering discontentedly to himself. His ultimate fate was unresolved, but now, with The Optimist, Anathema take up the man’s tale once more.

The opening track, ’32.63N, 117.14W’ picks up the tale exactly where it left off. The title of the track refers to the latitude and longitude coordinates for Silver Strand beach just outside San Diego, California, the site where our protagonist had decided to end his life. Breathless and shaken following his aborted suicide attempt, he gets back into his car, closes the door, exhales deeply, and turns on the radio. Finally selecting some skittering electronica, he turns the key in the ignition and our journey begins once more.

The Optimist is a watershed album of sorts for Anathema. It serves as a consolidation of the band’s recent work – the material released since 2010s soulful, magical We’re Here Because We’re Here – but also skilfully blends it with the music they produced whilst signed to the Music For Nations label in the 1990s. Perhaps ‘Leaving It Behind’ illustrates this most clearly. Opening with spidery beat-driven electronica, finally overlaid by the more traditional sound of the band, the track evokes the mood and style of A Fine Day To Exit. Old and new co-exist, at first uneasily and finally cohesively.

Ultimately, if A Fine Day To Exit was the soundtrack to the protagonist’s disengagement from his life, The Optimist is the soundtrack to his journey back to it. Cunningly, the listener is left to draw what they will from the songs that mark the milestones on this journey of rediscovery, rendering the songs more potent: with specific references and biographical detail removed, the listener places themselves in the driver’s seat of the Optimist’s car as it speeds them on their journey back to a life that perhaps isn’t the cause for despair that it may have seemed. This odyssey back to real life is marked, like all the most memorable journeys, with moments of calm punctuated by periods of darkness and self-reflection, and the occasional transcendent moment of joyous release. For approximately an hour, we sit alongside the Optimist as he finds his way back, physically and spiritually, to a life that had once overwhelmed him.

‘Endless Ways’ opens as a late-night piano ballad, beautifully voiced by Lee Douglas. This too builds steadily over an electronic pulse and swelling strings, finally fizzing over into a picked guitar melody and the slow build, catch and release that has become Anathema’s trademark in recent years. Douglas’ closing refrain, “The dream I’m creating”, appears to mark a sense of personal rebirth, a general feeling of positivity. There’s a powerful sense that the Optimist has reached a turning point, but when we hear the Optimist’s phone ring at the end of the song, he ends the call without answering it, not yet ready to re-engage with his old life. This sequence of events gives way to the title track, which is perhaps the most familiar sounding thing here for fans that came on board with 2010’s We’re Here Because We’re Here. An epic piano-based ballad that builds into a crashing riff with soaring strings, it feels somehow triumphant, showing that the dark of the world is survivable by those – the optimists – that can see the light.

Whilst Anathema have given us instrumental pieces in the past, ‘San Francisco’ is something a little different. Shimmering piano, evoking sunlight reflecting off the ocean, introduces a largely electronic piece, that effortlessly captures that feeling of surrendering to a place, letting your mind experience the place it’s in without consciously thinking about it; a holiday for the mind, and a balm for the wind-tossed soul of the protagonist. There’s a sense of wonder, an oasis of contentment at the centre of this journey of the body and mind.

The sound of trains rumbling past breaks the spell and opens ‘Springfield’. In terms of mood this is perhaps the polar opposite to ‘San Francisco’. “How did I get here?”, wonders the Optimist, “I don’t belong here”. It opens with gentle, rolling piano, but there’s a strong sense of growing unease permeating the track. A jarring undercurrent of jittery strings gives way to a swirling black cloud of post-rock, cut through with jagged guitar and closing with whispers of “and they were never seen again.”

Douglas takes the mic again for ‘Ghosts’, one of the most powerfully emotive tracks on the album. The barest skeleton of a song, it is given shape by an ever-changing cloud of strings and shuffling percussion. Fragile and beautiful, it barely contains a powerful yearning for family and familiarity, undercut with the fear that there is no going back. The Optimist is “tired and confused”, a lost soul torn between running away from, or running toward, the life he had given up. The subsequent ‘Can’t Let Go’ is a total change of mood, an upbeat kinetic rocker built around a restless drumbeat with an insistent electronic melody lending it an extra degree of urgency. Nonetheless there’s a bittersweet feel about it: a sense that the Optimist remains anchored to his life as he knew it prior to his voyage of self-discovery. At the end of the song, we hear the Optimist unlocking a door – perhaps to a hotel room – sitting down with a sigh, and flicking on a TV. His journey is nearing its end, but he’s not home just yet.

‘Close Your Eyes’ finds the Optimist at a crossroads. “For the dark road / For you and I / Which way to go?” Douglas sings, before the band conjure a slow-mo late night jazz interlude, complete with Twin Peaks guitar, trombone and double bass. However, there is a dawning realization that the Optimist is coming to terms with his world and finding the courage to confront it. “All that you need is inside”, croons Douglas in reassurance, before whispering, “It’s OK, it’s OK – it’s just a dream. Go back to sleep”, perhaps echoing the words the protagonist might use to reassure his partner or his child. The moment of reassurance passes quickly, though, followed by ‘Wildfires’, a queasily uneasy track built around a clattering electronic rhythm, and Vincent Cavanagh’s heavily treated and layered vocals. The track explodes into life partway through, mirroring the turmoil of the Optimist’s thoughts, before gradually ebbing away to tinkling percussion and a graceful keyboard figure.

The Optimist’s journey of self-discovery comes to an end with the final track, ‘Back To The Start’, the very title of which seems to indicate the path his journey has taken. Listless acoustic strumming over the sound of the surf gives way to a slow-building ballad of the kind at which Anathema excel.  “All I need is you / But you don’t know it’s true”, sings Cavanagh, channelling the Optimist’s hope that love is, in the end, enough. The track builds to a glorious and deeply cathartic climax that leaves behind a sense of transition, of having discarded the baggage of the past, although the lyrics provide no obvious resolution – for that, you will just have to keep listening. For, like A Fine Day To Exit, there is more to hear once the credits have rolled.

For established fans, The Optimist is simply essential – especially for those who found themselves particularly invested in the storyline of A Fine Day To Exit, who are likely to discover a great deal to love about this continuation of the story. It’s possible some may feel it is too similar to the last two or three records in sound and feel, but the band have certainly added some new tools to their musical toolbox: the more integrated use of electronics is welcome, and the strong post-rock influence displayed on ‘Springfield’ and the jazz flavourings of ‘Close Your Eyes’ are new ground for the band. The broad and carefully non-specific nature of the storyline also means that the album can be enjoyed by new listeners without the necessity of having to know how the protagonist reached the point we find him at at the beginning of the record.

This record marks perhaps the end of one period and the beginning of another for Anathema. Having tackled numerous musical styles in the past, there is now a sense that this band can literally take their music anywhere, the band no longer perceived as one style or another. Given the immersive atmospherics and emotive writing on display here, that is a mouth-watering prospect. In the meantime, this is a hugely atmospheric, cathartic and transformative journey to savour.