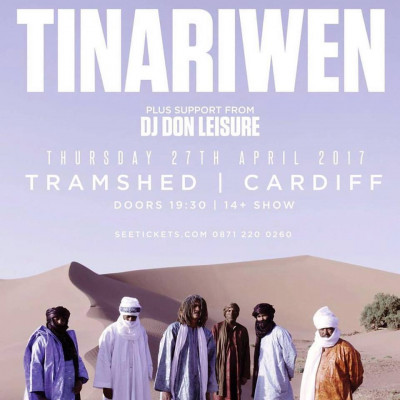 Cardiff’s Tramshed was treated to an early dose of summertime blues when Tinariwen strolled into town. Bringing their unique desert blues to the live stage, Tinariwen brought all the local hippies out of hiding to enjoy an intimate evening of easy-going blues rock.

An unexplained delay meant the band didn’t actually arrive on stage until 9.30pm, by which time the venue had filled almost to capacity. The duty of warming up the crowd fell to local DJ Don Leisure playing an interesting, if somewhat repetitive mix of catchy Afro-beat and dance fusion. Unfortunately, he was playing before the crowd walked in, so had no chance to introduce himself to the crowd and, due to the band’s lateness on stage, somewhat overstayed his welcome.

These were minor quibbles, however, quickly forgiven when Tinariwen themselves got up on stage. The skillful guitar-playing, and infectiously joyous music on display meant the audience (this reviewer included) were having too much fun dancing to care about a late start. Vocal duties were shared between Ibrahim Ag Alhabib, the band’s founder, Abdallah Ag Alhousseyne, the lead vocalist, and Alhassane Ag Touhami, chiefly responsible for getting the audience to dance along with his rhythmic swaying.

Tinariwen’s soulful desert blues is music to bask in, music that washes over the listener in warm tones, so the songs have a tendency to blur together. Live, this isn’t too much of a problem. Faced with a stage show stripped of any theatricality or gimmicks, the audience is able to come together more easily to enjoy the music on display. It’s an unifying experience, everyone dancing easily together to chilled blues rock – it’s probably the closest Cardiff has yet come to reliving the hippy invasion of the 60s. It arguably makes picking highlights more problematic, especially when the musicians on stage are so visibly pouring heart and soul into the songs they’re playing. Hard as they were to pick, there were standout moments: a particularly impassioned peformance of ‘Assàwt’ and ‘Sastanàqqàm’ from Elwan, and the crowd’s reaction to Ibrahim’s arrival on stage for ‘Tamiditin tan Ufrawan’ were particular highlights. The pace never flagged during the set, ebbing and flowing with ease. Old mixed with new just as easily: ‘Nànnuflày’ from Elwan was immediately followed by ‘Cler Achel’ from 2007’s Aman Iman, which then led into the title track from 2004’s Amassakoul, which in turn flowed neatly into ‘Ma Tenam’ from 2011’s Tassili.

Minor delays aside, Tinariwen delivered a wonderful gig. The music did all the talking, the audience danced happily along with Alhassane’s rhythmic swaying, and the venue felt bathed in warm, rich desert blues.