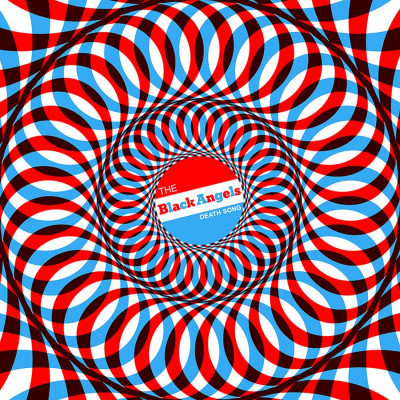 Death Song by The Black Angels

Their first album in four years, Death Song continues The Black Angels’ tradition of groove-based psychedelic rock and trippy op-art album covers. It’s familiar territory for their fifth full-length release, continuing the exploration of their last LP, Indigo Meadow, which itself was a return to the roots of their first album, Passover. Their debut serves as more than just a reference point; it’s a career-defining album for the band, who recently commemorated its ten-year anniversary with a series of shows highlighting its tracklist.

Death Song is a homecoming after several experimental albums. The latter half of their second album Directions to See a Ghost features an eight-minute jam, a sixteen-minute dirge, and a track using the signature psychedelic instrument, the sitar, as its bed. The band cranked up the spacey effects for Phosphene Dream and its accompanying EP of b-sides, Phosphene Nightmare.

The band began to draw back for Indigo Meadow, and their efforts pulled off. The record contains some of the band’s heaviest material, exemplified by the gutsy riffs of ‘Evil Things’ and ‘Don’t Play With Guns.’ But Indigo Meadow still has moments of vast spaciness, as heard in the wavy, leisurely ‘Love Me Forever’ and the organ-driven ‘Holland.’

Death Song favors raw, unadulterated sonic ideas communicated through pure timbre and crisp songwriting. The results are polished, though never overproduced. When I interviewed Maas last year ahead of this release, he still had fragments of the songs that would later sprout on Death Song. He and I spoke about how it’s difficult to leave a satisfying groove; sometimes, that’s where the song wants to stay. His criteria for a great song was one that you could rob a bank to.

Since that interview, I’ve realized several elements pervade the Angels’ work. The first is this groove-based approach to music, where instruments repeat a simple motif to induce a trancelike sonic atmosphere. On Death Song, the band digs in further with this direct songwriting approach. Southern grunge riffs come to the fore, which means more anthemic rockers that will shake walls in your local concert venue. ‘Comanche Moon’ is lifted by a girthy guitar tone channeling early Black Sabbath, whereas ‘Currency’ employs a call-and-response between Alex Maas’ lamenting vocals and a growling, rumbling guitar riff, evoking the brashness of Indigo Meadow‘s title track. Quintessential tracks of the band’s career, there’s no way they won’t play these live. On slower songs, the effects are lessened in favor of clean instrumentation, and Maas sings with minimal instrumental to support the elegiac ‘Half Believing.’

The second element is Stephanie Bailey’s tom-based drumming, injecting a throbbing, tribal low end into the mix. As ever, this is present on Death Song tracks like ‘Grab As Much (As You Can)’ and ‘I’d Kill For Her,’ a reliable device to induce the band’s third element: an undeniable menace, a tense feeling sometimes subtlely existing on the periphery. ‘Always Maybe’ from Indigo is a great example of this, as is ‘I’d Kill For Her’ off Death Song. In both, a dissonant verse resolves itself by the chorus, switching to a major mode in the song’s bridge before dropping back to the verse’s irresolute guitar. ‘I Dreamt’ is another bewitched, feverish nightmare built from an unresolved bass phrase and juxtaposed with screwy trebly effects invoking someone losing their mind. Maas’ soft lyrical delivery only heightens the song’s unnerving quality. The repetitious lyrics swirl around each other like an acid trip stuck on loop: “I dreamt that you dreamt / that I dreamt with you” and “I loved where your tripped, so I dreamt with you.” Midway through, a squealing, reverberant guitar delivers us into the depths of despair.

While the record isn’t explicitly political, there is a nod to the political climate with the red, white and blue political button cover art – both of which are practically headache-inducing with prolonged exposure. The indictment of the powers that be is suggested with the money-obsessed ‘Currency,’ and by the album’s conclusion on ‘Life Song,’ the sense of world-weariness reads more like an exhausted final gasp.

Death Song will excite existing fans, and for newbies, it’s an excellent continuation after giving Passover a listen. More of a companion piece to the band’s penultimate release Indigo Meadow, Death Song is a visceral snapshot of a band that’s honed their musical knives for a decade.