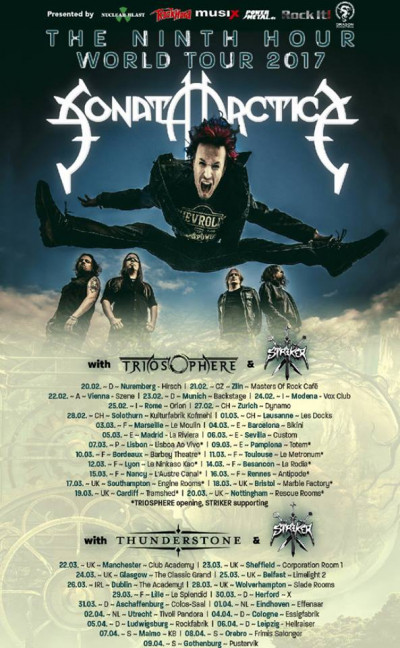 Finnish power metal veterans Sonata Arctica came to Manchester on the second UK leg of their Ninth Hour tour, bringing with them not only a strong selection of new and old material, but also a wealth of experience in how to please their crowds. The Club Academy would have provided an excellent space for them to show off their talents, but unfortunately this already moderately-sized venue was nowhere near full to capacity. It was soon apparent that this would prove to be the biggest problem the show would have. Whether this is due to the incredibly variety of Manchester’s live music scene, the fact that the band had already graced UK shores at the end of last year, or the fact that their relentless touring schedule had already given many their fill of the band I’m not entirely sure. Nevertheless, as a long-time fan who has only had one opportunity to see them before, I must confess a slight sense of disappointment at seeing the fairly small crowd who had turned out to see them on this Wednesday evening.

Those who did turn up more than played their part in proceedings however, which is unsurprising given the quality of live music they had to enjoy. First up were Canadian metal band Striker who really should be high up on many bands’ lists of potential openers. The five-piece are a bundle of energy and enthusiasm from the very start and quickly succeed in instigating a lot of headbanging, even at this early stage of proceedings. Though their brand of classic thrash mixed with a NWOBHM sound is nothing new and their songs are as cliché as any band of their ilk, they definitely know how to engage with a crowd of people who had very little prior knowledge of the band, and they pulled off their more technical parts of their songs admirably. Even though Dan Cleary [vocals] was clearly battling illness (to the extent that they even had to cancel a performance later on in the tour), he was still able to carry his frontman duties well and was helped out by some solid backing vocals from the other members, whose harmonies were at least able to provide a slightly different spin on their sound. Striker are not providing anything special but they are certainly providing a lot of fun.

The next band Thunderstone are a different case entirely though. Hailing from Finland like tonight’s headliners, they offer a more professional approach than Striker, but are still able to infuse this with a real dynamism. Pasi Rantanen [vocals] mentioned that the band made very few trips to the UK, which certainly explains why they had a very loyal contingent of fans front and centre for their set. All I can say is that this is to the British metal scene’s detriment. Thunderstone proceeded to delve right back through their impressive catalogue of songs and produce a set that was as rich in variety as it was in quality. Despite the wealth of fast-paced power metal songs, the moment that really stood out for me was their ballad ‘Weak’, not so much for the quality of their performance, but for the extraordinary levels of crowd participation that they were able to achieve – turning off all the lights and getting everyone to light up their phones and sing along. This is something I would expect from a well-known headline act, not from a support band who hardly ever play in this country. I can’t imagine that any of their fans were disappointed, nor can I imagine that anyone experiencing them for the first time like me would have walked away unimpressed.

Sonata Arctica therefore gave themselves a couple of tough acts to follow, but they proved themselves to be more than up for the start. Things don’t get off to the greatest of starts however, as they begin their set with ‘Closer To An Animal’ and ‘Life’, the first two songs off of their latest release, which a lot of the crowd clearly did not know. It is a shame in my view, because the volume and energy of the live performance made a definite improvement to the songs from an album which I felt lacked a certain dynamism that characterises so much of Sonata Arctica’s best work. The audience’s excitement picked up considerably for ‘The Wolves Die Young’ however, which may also be a fairly new track but has still nevertheless been quickly established as a fan favourite. This was the point at which Sonata Arctica really hit their stride and from this point they didn’t look back for the rest of the night. Each of the band’s five members displayed great presence on-stage and fantastic technical prowess, both individually and as a unit. Pasi Kauppinen [bass] and Tommy Portimo [drums] provided incredible energy which carried the band’s rhythm section through their songs’ relentless pace incredibly well, whereas Henrik Klingenberg [keyboards] and Elias Viljanen [guitar] stepped up to the plate brilliantly well when they needed to take centre-stage for the solos. Frontman Tony Kakko is the one whose performance really shone however, both in terms of his astounding vocal work and his ability to keep the crowd continually engaged.

With only just over an hour and a half long set-list, the inclusion of five new songs and some old rarities, Sonata Arctica had to forgo a number of their better known tracks; but given the fact that they very recently toured playing their classic debut album Ecliptica in its entirety, it was probably a wise decision not to go repeating many of the same tracks so soon afterwards. Nevertheless, they still found some time for many of the crowd-pleasers with ‘Full Moon’ being a particular highlight, along with the popular ballad ‘Tallulah’ which despite its slightly odd position so early on in the set nevertheless didn’t fail to hit the mark with everyone there. Sonata Arctica left only one of their nine studio albums untouched in the fourteen-song set, which demonstrates the band’s consistency throughout the years during which the standard of their live shows has been equally dependable. The albeit slightly undersized Manchester crowd showed their appreciation for their work too, bringing them back on for an encore which consisted of the uplifting ‘I Have A Right’ and their obligatory ending number ‘Don’t Say A Word’. They definitely saved the best for last, as everything good about Sonata Arctica was showcased in this four-minute conclusion. Things weren’t quite done yet though, as Tony Kakko proceeded to take the crowd through their ‘Vodka’ outro, again with somewhat unusual timing putting the main section of crowd participation at the end. So the evening ended on a slightly bizarre note, but it nevertheless just underlined what a wonderfully entertaining band Sonata Arctica are in a live setting. 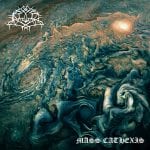