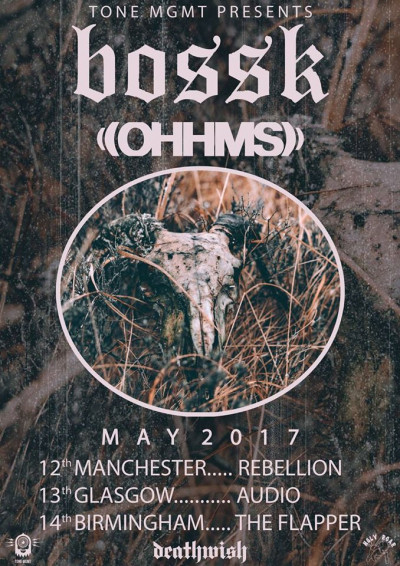 All photos by Ed Sprake.

Manchester’s Rebellion, nestled between the more glitzy bars of Deansgate Locks and beneath a strip club is a place that I think the owners spent all the budget on the PA and had no money for decor. Which is really all the majority of people that visit here cares about really. As with a few venues locally, it is a awkward shape. Kit for the various bands stacked in every available space and the merch guys propped up near the pool table. Despite the usual popular rock nights and tribute bands Rebellion has started to have some good shows, especially on the more interesting end of heavy music.

Opening was Vow, which I was informed by a rather dapper older man in a black three-piece suit and a bowler hat, was their second gig. The band started on a dark stage with a mix of feedback and sound-FX, band members barely visible in the darkness, the stage occasionally lit by just powerful industrial lighting. The opening track, fast paced, heavy with prominent blast-beats. Vocals blending into the noise. The short set showed a variety of styles, from brutal black and extreme metal to more atmospheric post-metal. The only criticism I would have is some lack of structure in places. Saying that the band are surprising accomplished for a new band, which is more surprising considering the unforgiving nature of this genre, or mix of genres I should say. Enjoyable and one to keep an eye out for the future. 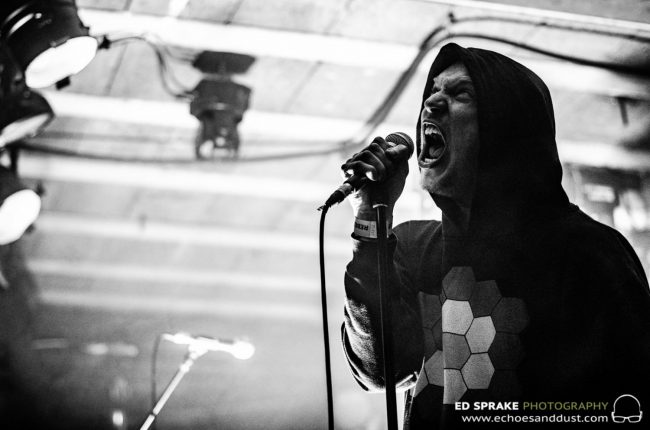 OHHMS warmed up shortly after, the band, seemingly somewhat constrained on the small stage. The opening track ‘The Musician’ opens with a driving drum track, soon followed by a wall of guitar, both guitarists working to create a thick sound interspersed with riffs. The initial pace of the track slows to a sludgy, dark, drone. Paul Waller morphing his voice into an angsty growl. OHHMS dip in and out of various genres, sounds, tempos and feelings during tracks. ‘The Hanged Man’ is a politically influenced tracks, according to Waller. The band seemed to relax into this track, the dynamic was better. The tracks from the new album The Fool are heavier, angrier and more straightforward. The bass player, Chainey, is brimming with energy, enjoying an atmospheric, bass focussed, break, before the track returns to a punky, post-hardcore energy. The guitarist in me wondered why someone would use hollow-body guitar for this style of music, then realising the epic level feedback was a critical part of some of these tracks and therefore ideal. The track ebbs and flows, in a similar nature to the opener. The first two tracks come in at over 20 mins.

At this stage, I was wondering who OHHMS sound like and realised that they don’t really sound like anyone else (or at least in my realm of listening). They have aspects of a whole bunch of sounds, which they blend to create something quite different. ‘The World’ is the best track of the set. The band, fully into the flow at this point, chucking out some massive riffs, the crowd collectively responding. This track, in contrast, remains at a frenetic pace, it’s a six-minute wall of doomy, dark noisy awesomeness. 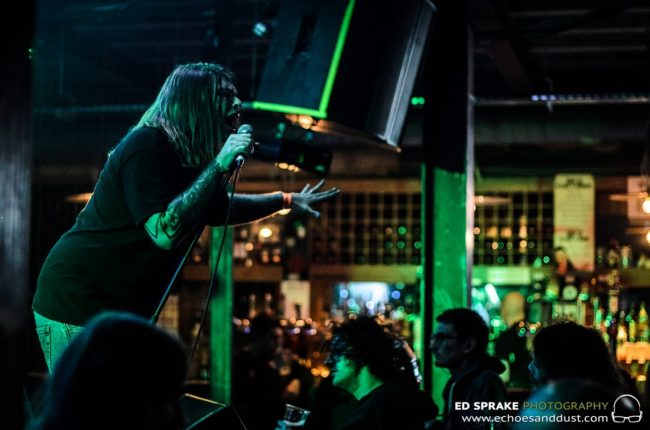 The last track ‘The Heirophant’, which is ‘a person, especially a priest, who interprets sacred mysteries or esoteric principles’ from Tarot cards, apparently. Has a very dark, slightly discomforting drone feel to it. Waller’s vocals almost a chant. Waller is a surprisingly versatile voice, angry and raspy at time but also melodic and powerful in others, his vocals are used to great effect on this track. ‘The Hierophant’ is a epic piece of work, at just over 21 and a half minutes, never lets up. Deep dark and powerful.

OHHMS have a sound that is sometimes old-school rock (there is even a few solos!), sometimes dark doomy and sludgy with a few stops in bang up to date post-metal. Despite only being around for a few years Ohhms have a mature, complex, dark and powerful sound and can produce both huge shattering riffs and dark atmospherics.The venue probably didn’t do it justice and the vibe from the crowd was a bit subdued. Nonetheless, well worth checking out live. 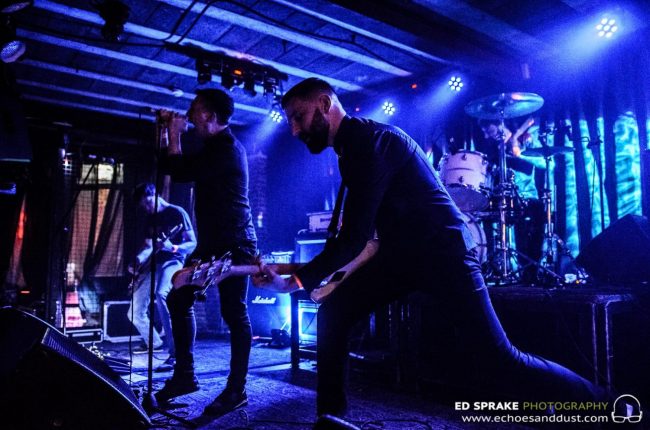 Fellow Kent four piece Bossk headlined the evening. They opened the set, amidst the strong smell incense and a hazy atmosphere with ‘The Reverie’, the atmospheric instrumental track starts with a the majority of the track has a standard, post-rock feel to it before abruptly becoming much heavier, the gentle feel giving way to massive, heavy riffs. The tracks runs straight into ‘The Heliopause’, which since I am learning some new words with these bands, is ‘a wind of interstellar gas caused by the Sun’s motion through space’. The big riffs are present again, Sam Marsh’s vocals, distorted pained and somewhat in the background.

‘Define’ from the pre-breakup 2006 EP II is a more angular, edgier track. The band spread energy through the venue. The track, which in places seems to loose the initial intensity has a long build up. The bassline carries this track though with a sharp, jarring tone. ‘Atom Smasher’ explodes into a brutal riff. Marsh’s barely there growl sometimes fades into the maelstrom of sound and just adding to the overall effect. A ferocious energy comes from the stage, the, although fairly chilled, crowd evidently. A change in intensity in pace and feel is a common theme to the evening but the way Bossk go from searingly brutal noise to almost 65daysofstatic melodic atmospherics is stunning. This is demonstrated to great effect in the last track ‘Kobe’. Over seven minutes the tracks builds to a brutal wall of noise, stopping just short of total chaos. The stage, bathed in bright white light, smoke, feedback and noise before abruptly ending.

The three bands all showed interesting and creative mixes of dynamics, sounds and energy. Vow, at the start of their journey, OHHMS rapidly becoming an consummate live act and Bossk, arguably at the top of their game.