(((O))) Review: The Sad and Beautiful World of Sparklehorse 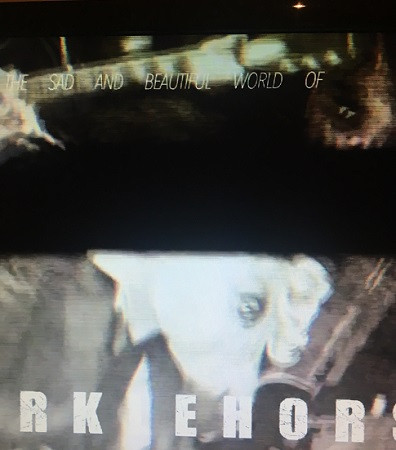 We all have our fallen musical heroes.  Those who comforted us, saddened us, emboldened us, who never knew who we were and who are no longer here.  It seems strange to think about that in any logical sense, but when has music had anything to do with logic?  There are artists in all of our record collections to whom we are grateful we can turn to when there’s nowhere else to go, and that’s something we’ll probably always carry with us.

That Mark Linkous remains so dearly missed will come as no surprise to anyone who is familiar with his work.  It’s quite sad throughout for sure, but it’s also beautifully inclusive so whether he intended this or not, his music nurtures all these little unspoken connections and communities where any vague mention of him or his Sparklehorse band/alter ego sends people scurrying off dewy-eyed to their record collections or sharing stories about how they first heard him and how his work became part of their own wellbeing makeup.

A documentary is therefore both long-overdue and most welcome.  And yes, it’s quite sad to sit through.  But as the title illustrates, this is only half of the reason why Sparklehorse is still held in such high regard; the Beautiful side is just as important.  Far from a document of the dead, The Sad and Beautiful World of Sparklehorse is mostly a celebration of a life spent making friends, peers and fans happy.

The main narration that holds the frame of this film together is provided by Angela Faye Martin, addressing Mark directly from behind the camera and speaking fondly of him in front of it.  Elsewhere is a well-chosen collection of friends, colleagues and listeners all with something unique, both in terms of what they have to say and the way in which they present their memories.  The result is a documentary that would feel at home among any number of Friday Night BBC4 presentations while also setting itself somewhere to the side and slightly distant from the usual format, fitting for its subject matter.

I suppose the most obvious way that this sits apart from other musical eulogies is that amongst the talking heads sits Linkous himself, an amiable and open commentator on his own story.  He fits in naturally among the rest of the speakers and provides a matter-of-fact viewpoint among the more emotionally-affected people gathered for this documentary – Mercury Rev’s Jonathan Donohue being a case in point, as his contributions are filmed barely-lit, in profile (almost over his shoulder) and a quiet, confessional manner which speaks volumes about how hard it must have been for some of the people involved to sit there and talk about their lost friend.

Once introductions are out of the way by means of a brief explanation of his childhood and old news footage of Dancing Hoods, his first band, the film is chronologically divided up neatly by Mark’s record releases.  These divisions may seem superficially cursory in nature, but with each one informed so closely by the experiences detailed surrounding them, this is a perfect framing device for each chapter.

A perfect description of Sparklehorse’s music comes from Camper Van Beethoven/Cracker’s (and Mark’s close friend) David Lowery.  “A little bit broken” sums up everything here, and feels especially prescient when the next subject is the short series of unfortunate events whilst on tour with Radiohead that led to his brief death and a spell in St. Mary’s hospital in London which shaped his Good Morning Spider album and is also where the film’s heart beats; the part where the sadness and beauty balance out, the part where the story is at its most emotionally calm and also when Vic Chesnutt’s name is drawn into the narrative.  This latter part is important as Vic is described as a “compass” to Mark as he learned to live with his own disability and eventually collaborated with him on Dark Night of the Soul, an album of which neither artist lived to see the official release.

I suppose that when stories such as this have such a final and inevitable conclusion, the mood changes toward the end.  It’s testament to his friends gathered that they all share such positive, touching, almost happy farewells that cushion the impact on the distant viewers.  This is a film for friends, who all have something positive and personal to say, I hope that this public sharing is something that lightens their own memories.

Overall, it’s a fitting and heartfelt goodbye from a nice bunch who would much rather still have him around than have to say goodbye at all.  It can be very hard to sit through on occasion, but such is the joy of having known him and/or his work that exudes from the people both in front of and behind the camera that it makes it easy to forget to be sad about the whole thing for a while.  The only slight downside to all of this is its general unavailability to the buying public, but filmmakers Alex Crowton and Bobby Dass frequently take the film out on the road to play for the people and communities still touched by Mark’s music and unique take on life.  Check out the links in the info section and follow the film’s Twitter and Facebook feeds for details of when this touching goodbye passes near you.