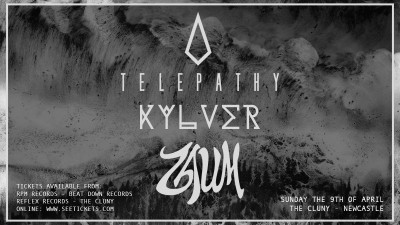 Telepathy at The Cluny

Telepathy on the web:
Facebook | Bandcamp |
Support: Zaum| Kylver
April 9, 2017 at The Cluny

Somebody said a thing once, about mountains not coming to Mohammed. Well, that’s me and Telepathy. Three times now I’ve been planning to see Telepathy play – once in Leeds and twice in Edinburgh – and three times now they’ve not managed to make it. Not their fault. Just stuff happening. So, if the mountain won’t come to Mohammed, Mohammed will go to the mountain. Well, Newcastle. Less pointy, but still quite far away.

And here I am. An extra hour early, because the event page lied to me. 6:00pm doors? No. 7:00pm, says the bit of paper at the door. Then somebody scribbles 7:15 on it. Then takes it away and replaces it with a new one that says 7:30. I am NEVER going to get to see Telepathy. But eventually they let us in. Not that there’s a lot of us. There are, perhaps, 30 people in the Cluny to see local openers Kylver. Hopefully the place will fill up a bit later. (Spoiler: It won’t)

Now, I like Kylver. I’ve seen them before and they were dead good. Their bass heavy, slow-build proggy post-rock is right up my street, and they’re on form tonight. The occasional combination of slightly cheesy Hammond organ and theremin sometimes leans a teeny bit too far into pulp horror movie soundtrack territory, but thankfully never goes full Addams Family. It’s quite refreshing to see a band using proper keyboards, and not just a tiny box with some buttons on it. The sound swings from cheesy Hammond to tinkly piano to full-on Phantom of the Opera organ and back again, and forms much of the meat of Kylver’s sound. Old technology often giving them a hefty early-seventies prog rock vibe (Are we still allowed to say ‘vibe’ these days?) like that bit in ‘Monolith’ that reminds me of Mountain’s ‘Nantucket Sleighride’. Their songs are long and subtle, but more than varied enough to avoid the tedium trap. Which is nice.

Annoyingly, for most of their set they’re playing under the horrific combination of blue/pink lights with plenty of smoke, making it nigh on impossible to take any decent photographs. A fellow in the audience is sketching in a notebook, and I bet he gets better pics than I do.

Blue/pink lights won’t be a problem for Canadian mantra-doom duo Zaum. Because they turn off ALL of the house lights and just use a few little units scattered around the floor, giving an eerie swirly red glow. Like lava. But not so hot.

They get off to a nice, gentle start, all droney noises and vaguely menacing chanting, whilst bassist Kyle Alexander McDonald strokes and plucks softly at his instrument1. It’s all nicely ambient, hypnotic and slightly Eastern flavoured, but then drummer Christopher Lewis raises his arms, smashes the living shit out of his kit and it all turns into a HUGE wall of noise. Oh yes.

I am amazed at the range of noises that Kyle can wring from his bass. It screams and bellows and roars like an animal. It does things that bass guitars were never meant to do. I mean, seriously, how does he make it sound like a fucking CHURCH ORGAN?2  He does most of his bassing up where the frets are many and close together, rarely troubling the big ones down at the far away end. He sings a bit, too, but his voice is barely audible, just adding another layer to the glorious noise. Sometimes they sound a bit like Ufomammut, but mostly they don’t. Somebody says that they sound like Om. Perhaps they do.

Zaum play for somewhere in the region of 40 minutes. I have no real idea if they play one song, two songs or half a dozen songs, and I don’t really care. Because they’re mesmerising and they’re so damned good. Ambience, RIFFS, ambience, MORE RIFFS…. Zaum are awesome and 40 minutes is not enough.

And so. Finally. I get to see Telepathy.

The Colchester quartet have a new album out. It’s called Tempest and all bar one of tonight’s songs will be from that album. Which is only right and proper.

Like Zaum before them, Telepathy start delicately, this time with the sound of the ocean and the pretty little album opener ‘First Light’. Again like the Canadians, Telepathy soon enough break out the riffs with ‘Smoke from Distant Fires’ and ‘Celebration of Decay’ mixing pummelling post-metal crunch with gentler post-rock interludes, like a mash-up of Pelican and EITS, but better than both.

The ‘crowd’ has thinned out a bit now, sadly, and only about 20 people remain to see Telepathy. But they play with passion and ferocity, as if they are entertaining 2000 adoring fans. They own the stage, throwing some excellent rock shapes. Bassist Teddy-James Driscoll, in particular, gives it his all, legs splayed and head thrown back. There’s even the occasional Status Quo synchronised head-banging moment. Deliberate? Perhaps. Either way, Telepathy are fun to watch. And they’re really, really good.

They chuck in ‘Cystine Knot’, an oldie from their first album, and then head back to the new material for the remainder of the set.3 I loved their early stuff, but this is better. It’s dramatic, and it’s exhilarating. The quality of the musicianship is impressive, particularly the drumming. That chap, Albert Turek, certainly knows his way around a kit. There’s even an unexpected bit of screamy vocals in ‘Echo of Souls’.

OK, I know it’s only April, but I reckon this is going to be one of the best post-rock/metal gigs I’ll see this year. And not just because I’ve waited so long to see Telepathy. Simply because Telepathy are very, very good at what they do.