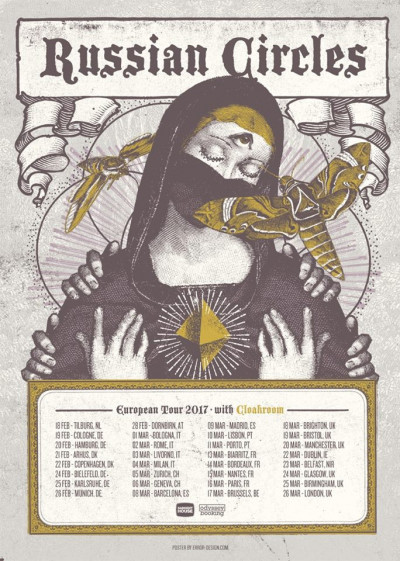 Russian Circles have been a regular presence in Ireland for the past 5 years, but they always seem to generate a nice buzz every time they’re in town. This is probably my 4th or 5th time seeing Russian Circles live and the first time I’ve seen them play songs for their most recent album, Guidance.

It was a rainy Wednesday evening in Dublin, in one of the city’s most iconic venues – Whelan’s – and still the room was quite packed and full of energy. As I squeezed my way to the bar, I didn’t help but overhear a few (very positive and excited) conversations and comments about the band and their last album. That got me pumped up.

Finally with a drink in hand, a nice seat and a nice view to the stage. Opening act Cloakroom made their way onto the stage. First time seeing them live and very interested to see how the crowd would react given they were not exactly the type of band expected to open for Russian Circles. They played approximately 40 mins of heavy monolithic shoegaze mixed with some alternative and indie rock. I’ve also seen them labelled as “stoner emo”, which I found amusing. Fuzzy riffs, pounding drums and an overall low key performance with few interruptions or interactions. The crowd was interested, but they were clearly pumped for Russian Circles.

A few drinks later and it’s time for Russian Circles. After the intro ‘Asa’, they bulldozed their way in with ‘Vorel’ and ‘Deficit’, two evil heavy and crushing powerhouses that got everyone headbanging. The energy coming from the stage was immense as they continued firing out songs such as ‘309’, ‘Afrika’ and ‘Mota’ (the latter two from their most recent release).

The setlist was, as expected, varied and included tracks from all albums except Enter and Geneva. I do have to say this was a bit of a letdown, but even though I had that tiny bit of hope they would play ‘Geneva’, ‘Carpe’ or ‘Death Rides a Horse’, I wouldn’t want to remove any of the songs they played. Crowd favorites ‘Harper Lewis’ and ‘Mladek’ were also present in the setlist and ‘Youngblood’, a personal favorite, was the perfect closer.

It’s impressive to see how comfortable the band has become playing these songs live and how effortless it seems. No, they are not the most talkative band live, nor are they known for super long playlists or encores, but they sound like a perfectly oiled machine and it gets better every time I see them live. It’s amazing to see how easy guitarist Mike Sullivan makes everything he does look, how Dave Turncrantz punishes his drumkit and how massive Brian Cook’s bass sounds.

If you have a chance to catch Russian Circles in a venue close to you during this tour, don’t miss the chance. If you cannot, they are just about to release their performance at Dunk! on vinyl. How convenient!