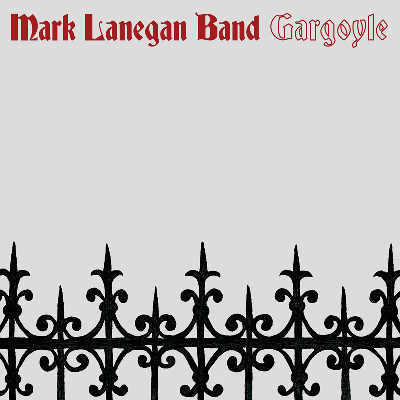 I have to admit that this one took a little while to bed in.  Mark Lanegan Band albums have a knack of being out there on their own (and they’re all the better for being so) but it’s possible that Gargoyle stands out as being the most different of them all.  And the best part about it is that it takes that little while to properly notice.

Right from the very start, Gargoyle is an obviously strange album. ‘Death’s Head Tattoo’ kicks it all off in bombastic fashion, sequencers and guitars flying around a chorus slightly reminiscent of a Gutter Twins memory, followed by a slightly Cure-like ‘Nocturne’ that lulls the listener into thinking “well this is a bit different, but it’s hit a nice groove early on so I’ll just settle back with the rest of the record…” – and then it changes with the electronica-and-pump-organ ‘Blue Blue Sea’, and then it changes again with the MaryChain pop of ‘Beehive’, and then again and again and again.

The way that Lanegan gets away with this with such aplomb is the way that it’s all put together, which will come as no surprise to anyone who’s listened to pretty much anything he’s done since the year dot.  There are mentions above of “reminiscent of” and “-like” when describing how his songs sound, and this is as accurate as it’s possible to get when discussing his work as his influences tend to bob to the surface and vanish again before one gets a decent grasp of where it came from.  Snippets, essences and phrases of all manner of past artists have been carefully listened-to, unfurled and reconstructed so that what was once a cloud of disparate ideas is woven into a whole new entity that is very definitely a Mark Lanegan Song, wrapped around lyrics even more opaque than usual (for the most part) and a voice that, as always, commands attention at the centre of it all.

Working separately with two main collaborators this time, usual foil Alain Johannes is joined by ex-Exit Calm guitarist Rob Marshall and this provides an opportunity to push his post-punk exploration beyond the Factory floor and off into other directions; ‘Sister’’s coda slightly echoes the Stone Roses’ Tightrope for example, and ‘Drunk on Destruction’’s Jungle backbeat would stop any Lanegan fan dead in their tracks if it didn’t feature towards the end of a record so full of twists and turns that it’s almost to be expected at that point.  One thing that I can’t seem to shake from my head as I listen to this is that much of the atmosphere seems to draw me back towards Electrafixion, the strange, noisy Echo and the Bunnymen 1994 hiatus project.  This, as it turns out, was a lot more fun than I originally remembered it.

The album’s true highlight and biggest curio comes right at the end with a typically big closer.  What makes ‘Old Swan’ so intriguing isn’t the uncharacteristic upbeat nature of the song, its lyrics and the way that Mark delivers it, it’s more in the way that it stops.  With two and a half minutes to go and a final refrain of “Clean…”, he leaves his own stage and doesn’t return.  An extended outro isn’t the strangest thing to finish an album with, but for all the gothic trappings in Gargoyle’s title, artwork, occasional lyrical imagery, colour scheme and even font, the lasting impression is one of lightness and contentment, and this final thought is the beating heart of an album that has spent the previous 40 minutes seemingly going out of its way to avoid making sense.

It’s easy to say that Gargoyle’s mixed-bag approach, like its predecessor Phantom Radio, won’t immediately appeal to everyone.  The way it’s tied up at the end though makes it a lot easier to absorb and enjoy with repeated listens.  Whether ‘Old Swan’’s denoument has a wider meaning than is apparent here (the end of Dark Mark?) will only be answered with the next installment.  Until that comes along, Mark Lanegan continues to refuse to stand still and do anything that’s expected of him, and while he continues to do this at such a consistently high standard, long may he continue to do whatever the hell he feels like.