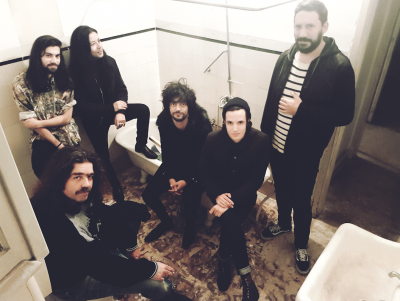 "everything unfolded in a chaotic but exciting way, and became a matter of perseverance as it came to an end. It’s not a coincidence that Panic is part of the band’s name!"

It was a long 4 years since Homem Elefante but Riding Pânico are back with a few changes to their line-up. We caught up with Shela, their keyboard player, regarding their most recent effort entitled Rabo de Cavalo, what inspires the band, how they create music and what it’s like to have a band in Portugal. Spoiler alert: it’s not easy.

(((O))) Judging by the album title (Rabo de Cavalo – Horsetail) and the names of the songs, there doesn’t seem to be a concept. What is/was the source of inspiration for the album?

There was no concept at all, just the will to make an album. The inspiration was everyone’s ideas, plus those of Fábio Jevelim (guitar player), who first came forward with a series of ideas that later originated others, like some sort of of butterfly effect.

(((O))) How do you come up with song titles and what do they mean? They are always very original and creative.

If I remember correctly, I think that only the title of the ‘Café del Mar’ came along with the song, and what dictated it was the sonority of it, like a compilation of songs in “chill out” mode.

The other songs were named when we finished the mix, and when we heard for the last time what exactly would be recorded. We were all listening to the final mix of the record and talking about nothing special and deciding the names for the songs and for the album.

(((O))) How do you start the creative process of an album (and this one in particular)? What inspires you? Why does it take you so long to release albums?

I think it always starts with a mix of willingness to create new music, to be with another, and time / availability.

In this particular case, Fábio Jevelim appeared with some structured ideas which trigged it all.

Overall, either on an individual or group level, we just needed the will. This moment was critical and determined whether or not the album would be conceived. After this, everything unfolded in a chaotic but exciting way, and became a matter of perseverance as it came to an end. It’s not a coincidence that Panic is part of the band’s name!

It takes us long to release when there is no will or opportunity to do so.

PS: That aside, it’s much better to let this kind of thing happen, than to force it to happen. The end result is so much better (in all modesty).

(((O))) Over the years the band has had some line up changes. What is the impact of the all the arrivals and departures?

The impact is overwhelming and exciting if faced positively. Either one case or another.

(((O))) What do you think the reasons are for the band not to be as well known internationally as in Portugal? Is it due to lack of resources, lack of opportunities or lack of will?

Yes, it’s clearly lack of resources. We like to play live, we do not like to rehearse and, of course, we like to play abroad as well.

We have tried European tours with our other bands (eg. If Lucy Fell) by our own means but the effort is great and the band ends up financing the whole process. At the end of the day, it is better to invest, for example, in a Rabo de Cavalo, which if we didn’t do things how we do, would certainly not exist.

Furthermore, it is not really easy to find places to play outside of Portugal. Come to think of it, for example if you play in Barcelona, ??with a band of six people and with what is normally paid to bands nowadays, this would involve scheduling 1 or 2 concerts on the way there and maybe another one on the way back, so that the band wouldn’t simply “pay to play”. We know that if we don’t try it will surely not happen, but we think that it would not be possible if only the elements of the band to work for this. Also because if we have jobs, we could not play as often and would take us even longer to release albums.