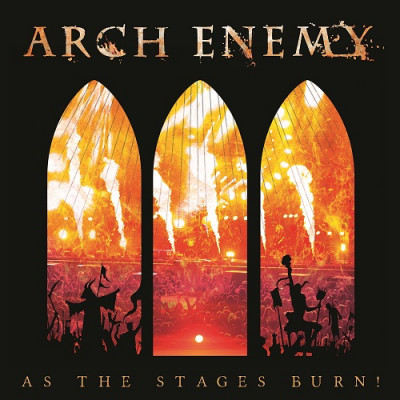 As The Stages Burn! by Arch Enemy

“Wacken… We are Arch Enemy! And this is fucking war!”

When Alissa White-Gluz bellows this introduction in the wake of a storming ‘Yesterday Is Dead And Gone’, it’s not merely lip service to the title of Arch Enemy’s latest studio album, but a statement of intent. Following the departure of much-loved vocalist Angela Gossow – one of the best-loved and well known frontwomen in metal, and Arch Enemy’s longest-serving vocalist – all eyes were on White-Gluz as she took on the vocal role in the veteran band. The band’s first album to feature White-Gluz as Arch Enemy’s vocalist, 2014’s War Eternal, managed the seemingly impossible in delighting existing fans and bringing the band to a new audience. As The Stages Burn! serves as a document of the band’s lengthy touring activity in support of War Eternal, and also marks the first appearance of new guitarist Jeff Loomis (ex-Nevermore) with the band. Available in CD, a digipack including the CDs and a DVD of the show plus numerous extras, and an extravagant three-disc deluxe edition, this is perhaps the band’s most impressive tour document to date.

Many fans and commentators have been moved to ask in recent times where the natural successors to legendary big-name bands like Metallica and Iron Maiden may be found: on the evidence of As The Stages Burn! it would seem self-evident that Arch Enemy are one such band. Formed in 1996, the band have nine albums of superb material to draw upon, and the experience to put on a great show into the bargain. Always a reliably tight and energized band, this release seems to demonstrate an ever-increasing confidence and self-belief; this is a band who appear driven and determined to move things up a gear. This applies to both their music and their live presentation: recorded at the Wacken festival in 2016, As The Stages Burn! shows the band at their live best, deploying their most extravagant stage production yet in front of a huge audience.

The band explode onto the stage with a spectacular rendition of ‘Yesterday Is Dead And Gone’ – the title alone an indication that this band prefers to look forward, not back – before blazing through the title track from War Eternal. By the time the band cuts loose with the frantic introduction of ‘Ravenous’, we start to see the full scale of this bigger, bolder show. Drapes fall to reveal detailed backdrops, pyro erupts, and the full power of the huge lighting rig is deployed to impressive effect. This is Arch Enemy stepping up, dialling up their sturm und drang for a large festival crowd and proving that they can go toe-to-toe with the giants of the genre, the acknowledged big hitters who have, whether by accident or design, dominated the headline spots at festivals for some time – decades, in some cases.

The set list is perfectly judged, showcasing songs from all eras of the band: and whilst naturally the focus is on the more recent material, there are plenty of crowd-pleasing Arch Enemy classics thrown into the mix, including a hugely powerful ‘Fields Of Desolation’ from the band’s very first album, Black Earth. The set also demonstrates the band’s formidable ability to meld the heads-down fury of death metal – such as the drill-like intensity of a perfect reading of ‘Bloodstained Cross’ – with highly melodic and more restrained set pieces, like the gorgeous duelling lead guitars at the centre of ‘My Apocalypse’, or the glorious unison part that provides a release from the intensity of the titanic riffing of ‘Under Black Flags’.

This is a hugely crowd-pleasing set, then: and the superb staging makes the accompanying concert film perhaps the best way to experience it. The beautifully-shot footage showcases the band and their impressive stage show to great effect, but also lingers often on the audience. The shots of the audience lend extra heart to proceedings. The die-hards are there, of course: singing along with every word – and sometimes even singing back the guitar melodies, notably on ‘Ravenous’ – crowd surfing with evident glee, head-banging furiously and screaming their approval, faces wreathed in broad smiles. The most telling reactions are from some audience members who appear not be huge fans of Arch Enemy themselves so much as fans of metal as a whole, festival-goers who rocked up to the stage to see something new. You can almost feel their enthusiasm grow throughout the set, and by the time White-Gluz encourages everyone to bounce in time with the beat during ‘No Gods, No Masters’, the delirious crowd reaction clearly demonstrates that the band have made many new friends.

As The Stages Burn! is as perfect a document of the War Eternal tour as Arch Enemy devotees could possibly hope to see and hear, but it has greater significance even than that. It points the way forward for a reinvigorated band, and also serves as the perfect appetizer for new listeners. It’s also proof positive that Alissa White-Gluz is the ideal successor for Angela Gossow: it’s one thing to deliver in the studio, and quite another to deliver a great performance on stage in front of a large audience night after night. Gossow’s tenure with the band was so iconic that it might have been difficult to envisage anyone else fronting the band, but White-Gluz proves herself more than a match for Gossow’s legacy here. It may be over two decades now since Arch Enemy formed, but here they display the fire and passion of much younger bands. As The Stages Burn! is perhaps the closest that a death metal band has come, in recent times at least, to delivering a live album capable of going toe-to-toe with legendary live albums such as Live After Death or No Sleep Til Hammersmith – it really is that good. This is a hugely powerful performance from one of death metal’s most enduring bands, beautifully recorded, mixed and presented. Play it loud.