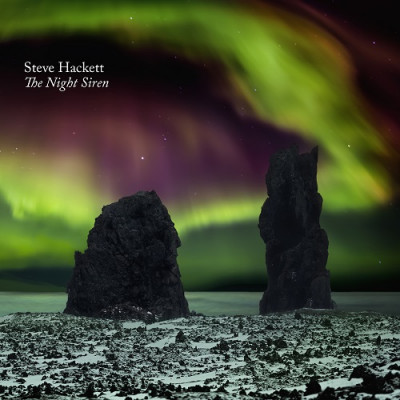 The Night Siren by Steve Hackett

In 1971, Steve Hackett placed an ad in Melody Maker that read “Guitarist/writer seeks receptive minds determined to strive beyond existing stagnant musical forms.” Shortly afterwards Hackett received a phone call from one Peter Gabriel, then lead singer with Genesis. The rest, as the saying goes, is history. Just six years later, Hackett handed in his notice and left Genesis behind, increasingly demoralized and frustrated that so many of his musical ideas were being discarded. His tenure with the band may have been brief, but the albums he recorded with Genesis – Nursery Cryme, Foxtrot, Selling England By The Pound, The Lamb Lies Down On Broadway, A Trick Of The Tail and Wind and Wuthering, a formidable body of creativity in a very short space of time – are now regarded by many as not only as the band’s best work, but also as records synonymous with the term progressive rock.

Having already dipped his toes into solo work with 1975’s well-received Voyage Of The Acolyte, Hackett wasted no time in returning to the studio, this time as captain of his own ship. Please Don’t Touch – pointedly including ideas discarded from Wind and Wuthering, Hackett’s last album with Genesis – was released in 1978, just weeks after Genesis released And Then There Were Three, its title a clear reference to Hackett’s departure. Since that time, Hackett has continued to be exceptionally prolific, clocking up a total of twenty-three studio albums that run the gamut from progressive rock to pop, blues, and classical all filtered through Hackett’s unique playing style and guest starring a cornucopia of diverse collaborators. More recently, thanks in part to what looks likely to be Genesis’ own curtain call in 2007, and the remaining members of Genesis preferring to make more commercial if still superb records, Hackett has in a sense become the natural custodian of the Genesis back catalogue created during his tenure, releasing two Genesis Revisited albums and playing shows centered around that material. However, Hackett has continued to write and record his own music, his restless muse not content to settle on a comfortable nostalgia.

The Night Siren is Hackett’s latest solo album, although the term “solo” does some disservice to the stellar players Hackett has assembled to record the material, who all put their own – in some cases instantly identifiable – stamp on the record. Hackett describes the album as a wake-up call, a rallying cry for everyone who sees the world sliding into some dark times, and his intent resonates powerfully throughout the album’s running time.

Opening track ‘Behind The Smoke’ builds from a languid opening into a thunderhead of powerful drumming built around an Arabic riff – perhaps the closest well-known analogue would be Zeppelin’s Kashmir. It lays the groundwork for Hackett’s conceptual ideas about the album being a call for hope as it describes the plight of refugees struggling to escape the toxic environments of their home countries amidst a “world torn apart”. A superb opener, ‘Behind The Smoke’ paves the way for a cavalcade of disparate ethnic influences – the voices of the world, united in this statement of unity and empathy. For, as is usually the case with Hackett’s work, this is a diverse record displaying a dizzying array of influences; so much so that on paper it shouldn’t work. After so long making music, however, Hackett never applies a cut’n’paste attitude to his music: it is seamless, organic, effortless.

‘Martian Sea’ opts for a friendlier tone, bouncing along on a upbeat riff, but features a decidedly Indian breakdown mid-way, whilst ‘Fifty Miles From The North Pole’ mixes hard rock and some fine extended fiery soloing with a children’s choir and the vibe of a spy thriller. The all-too-brief ‘El Nino’  marries Hackett’s spiralling, endlessly inventive playing to a pounding performance from Gary O’Toole, Hackett’s long-serving touring drummer; this makes for a fine contrast with ‘Other Side Of The Wall’, a gorgeous string-drenched ballad underpinned with Hackett’s hallmark intricate acoustic playing, that lapses into a wonderfully spooky ending.

However, Hackett is just getting started. ‘Anything But Love’ also features some wonderfully spidery acoustic work in the intro before turning into a vaguely Latin-flavoured bluesy romp that is perhaps the most traditional or predictable track on the album, reminiscent of Santana at their most mainstream, although Hackett himself steals the show with an unexpected but spectacular harmonica solo. The Latin flavour is continued with ‘Inca Terra’, a dreamlike track built chiefly around a cascade of massed vocalese that Yes would be proud of before breaking into a gallop, its distinctly South American flavour providing the bedrock for one of Hackett’s finest guitar blowouts on the whole record as he spars with Roger King’s swirling synthesizers. ‘In Another Life’ switches back to a more acoustic approach, with a distinct country twang that switches to a martial rhythm and a classic Hackett playout, topped off with a gorgeous uillean pipe solo from Nightwish’s Troy Donockley. ‘In The Skeleton Gallery’, all marching feet, baleful guitar and string flourishes, is the closest the album comes to a warning. As countries across the globe succumb to fear and the easy answers of the populism and right wing politics, Hackett’s formidable band are here with another reminder that this seldom ends well.

By the time the album builds up to the anthemic and gloriously optimistic ‘West To East’, where the voices of the world seem united in a message of peace and reconciliation (“Be at one, be at peace / Shine a light to west to east”), it’s very difficult to remain unmoved. If Hackett’s intention is to remind us that we have so much more in common than we have differences that set us apart, then it’s a fait accompli. The languorous closing instrumental, ‘The Gift’, is a perfect coda, emotive and reflective without being cloyingly sentimental.

It has been said many times that uncomfortable times create the most dazzling and affecting art, as creativity is sparked to greater heights within artists who keenly feel that they need to say something, to speak out and appeal to the better angels of our nature. It is perhaps the perfect demonstration that The Night Siren is perhaps Hackett’s most openly political work from his entire five decade career: not the politics of parliament, but the politics of humanitarianism. Clearly the current dramas being enacted in countries across the globe have had a powerful impact on Hackett, and this is reflected in what feels like one of his most dynamic and powerful – and personal and emotive – records.

The Night Siren is ample proof that after over 40 years making music, Hackett has as much to say as ever. His creativity seems as boundless as ever, giving rise to a welcome eclecticism that the cunning sequencing of the album renders almost seamless, no mean feat in itself. If you’ve already fallen under the spell of Hackett’s mesmerising playing, this is quite simply essential. If you’re new to his solo work, and looking for a record that demonstrates what Hackett is all about, The Night Siren is perhaps the perfect choice. By any sensible yardstick, this is one of his best and most cohesive albums for some time.