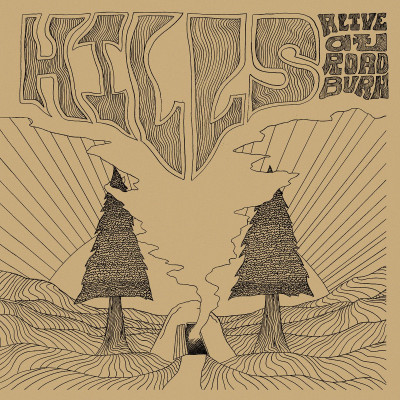 Alive At Roadburn by Hills

Forever destined to stand within Goat’s shadow, label-mates Hills may miss out on the hype & glory that the aforementioned psychedelic tribe get. Or they may not, depending on your point of view as to whether they are one and the same band. Forever entwined in mystery, where the former is getting slightly over-egged, Hills have left it to the music to do the talking. Over the course of three albums, Hills, Master Sleeps and Frid, they have created an other-worldy kind of music which takes in psychedelic extremes of dance, space rock and as in keeping with Goat’s breakthrough release, world music.

It is in the live arena that Hills truly excel and having wowed the crowd at Liverpool Psych Fest in 2015, they did the same thing again at the ever impressive Roadburn Festival. Joining a growing number of artists to have released a live recording of their show at this festival, Hills throw in another worthy addition to their increasing music collection.

The thing with Hills is that whilst they sound good on studio releases, live they take those songs and stretch them out into new forms. Always recognisable, they look for that main trigger, the part of the song which gets you hooked and they go for it. Not for them a facsimile of the recorded output, and that urge to continue to explore becomes a pivotal part of the live experience. It also sets them out as true psychedelic warriors and in a genre which is struggling to retain an identity, a beacon of pulsating light in the space rock wilderness.

The eastern twang of ‘National Drone’ kicks us off and if any song sums up what Hills is about it is this one. Repetitive and droned out, it’s incessant melody slowly building into a distortion of noise. Inducing a trance-like state, it’s the perfect introduction. By the time next song ‘Frigorande Musik’ bursts into life you feel like you have woken in some strange land.

‘Frigorande Musik’ is a prime example of how Hills can take a motif and develop it into an extension of what the song originally was. A lengthy jam, unavailable in studio form, it has become a distinct part of the Hills set. A simple psychedelic guitar playing off against a rapid beat, leading you ever down the rabbit hole. It also provides Hills with their chance to stretch out and remould the song into new forms.

‘Master Sleeps’ throws a bit of 70’s funk in the mix introducing a less spaced out side of Hills. It’s a perfect reminder that beneath it all, Hills are in simply in tune with what must be a marvellous record collection and this song seems to channel everything that was great about simple, funky music. Stretched out to much lengthier proportions than the studio release, it becomes the centrepiece of this live performance.

The chilled out vibes of ‘Och Solen Sankte Sig Rod’ lead us slowly out of this wonderful performance. A moment of transcendence, it’s dubby nature brings you down whilst simultaneously trips you out again. Playful to the end, Hills are masters at twisting the sounds you hear. There are times when you are so drawn into the music that you forget your actual surroundings, such is the intensity of the performance.

It could be argued that live albums are somewhat superfluous in these days of YouTube yet in psych music they seem to have found a new lease of life. The sonic nature of the genre enables a displacement to happen which works well when, as on here, the band explore different avenues within the songs. In doing that, Hills have created not only a wonderful memory of a no doubt excellent gig, but also an extension to their music which is endlessly repeatable. Psych music should always be about exploring the confines of the song that has been created and Hills have certainly grasped that. Now, did we mention another Swedish psych band earlier? No?