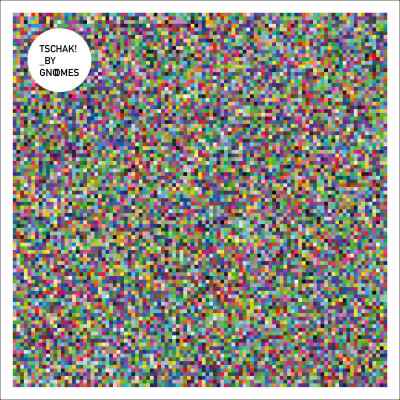 Russia is a country perhaps more known for its clamping down of certain freedoms, it’s perhaps surprising to find a burgeoning psychedelic scene. Maybe it’s the need to escape from an authoritarian reality that has driven bands to explore inner and outer worlds, it also provides an interesting way of questioning their surroundings.

One such band is Gnoomes who, with debut album Ngan, alerted the UK psych world to this new region. Helped in no small way by the ever excellent Rocket Recordings, they have soon marked themselves as one of the most exciting and interesting bands around these days. Taking blissed out trance, industrial psych and a complete freedom of approach to do whatever they feel like, Gnoomes have unwittingly set themselves up as a yin to the yang of that other great Rocket band, Gnod.

Of course, Gnoomes are quite capable of existing on their own outside of a yin/yang experience and with new album, Tschak, take their music to another level completely. Much more fluid than Ngan, the music here sounds conceptual and whilst there are vocals, it is mostly the instruments that take us along for the ride.

Glistening synths and throbbing bass lines lead songs like ‘Maria’ down ever expanding wormholes. Bursting out from dark exteriors, the industrial sized snarl of ‘Super Libido Awake’ shaking us from the start before it slips into gear, beauty plays itself out over the retro-futuristic sound.

There’s a hint of Tangerine Dream’ Stratosfear on ‘Severokamsk’ which starts ever so ostentatiously before unravelling into free-falling synth work-out. Stabs of melody fight against each other creating an other-worldly yet comforting sound, all the time taking you further out into space. The title track completes this first half mission to fry your mind as it’s cascading start breaks out into a clarion call of horns, invoking the old acid house days before drifting off into a slumbering trip.

This moment of complete space-ness is remarkable given the context of the band. To find freedom in music is one thing, to actually find and create an escape is something else. Gnoomes have an unnerving knack of sending you right out into space when you least expect it. Tschack works both as an album and as a singular track to do this. It also allows the bass of ‘City Monk’ to bring you into a more level plain, this time with shades of Kraftwerk shining through. Gnoomes being more in tune with the original idea of krautrock, it’s unlike anything else around today yet retains a recognisable edge.

‘In The Park’ practically shimmers into view whilst ‘One Step’ turns the darkness up in what sounds like an 80’s synth classic. Never standing still and repeating yet always a huge sense of unity, it’s music that envelops you and makes you feel part of it. There is empathy, joy and blissful wonder, all tying into a sense of being. It’s a natural high and very potent at that.

It’s early doors for 2017 but provided we all survive this year, Gnoomes should easily find Tschak at the top of those dastardly albums of the year lists. More rounded than their great debut release, here they find another level. It’s the sound of a band discovering themselves and whilst they do it, they invite you in for the ride. It truly is an escape from the real world and one which where you wish you could remain. Exceptional.