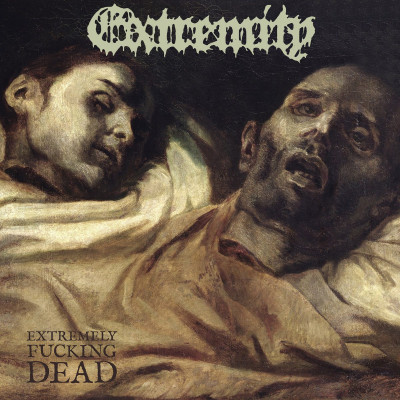 Extremity is one of the new bands in 2017 that I couldn’t wait to hear. I am beyond stoked I was able to get it to review. What I knew about the band, is that they have a metal all-star lineup: Shelby Lermo (Vastum – one of my favorite current bands), Aesop Dekker (Worm Ouroboros, Ludicra, Agalloch, Vhöl), Marissa Martinez-Hoadley (Cretin, Repulsion) and Erika Osterhout (Necrosic, Scolex, Trepanation).

Shelby Lermo is an incredible guitarist, on album and live. I constantly listen to Vastum and had the pleasure of seeing them live twice in 2016. And while on the subject of incredible musicians, Aesop Dekker is one of the best drummers in the metal world. I have seen him live in many forms throughout the years – from black metal (Ludicra) to the soothing doom of their experimental Worm Ouroboros. Marissa and Erika’s works are a little lesser known to me, but I do know they are also powerhouses of creativity and amazing musical talent. Needless to say with that information, that Extremity was already going to be the top of my list of bands to look out for. And I am glad the time is now.

Extremity’s debut album Extremely Fucking Dead is a 6 track power statement, letting us all know that they are here to go straight to the top of the Bay Area death metal scene in no time. The first thing that jumps out at me is that they are very similar to Vastum with good reason – having Shelby on vocals and guitars. He is a pro at what he does and to carry over that guitar sound is perfect with Aesop’s insane drumming skills. You will notice that this album is a very impressive debut album. What any bands can only dream about achieving. The second, is that the sound has a ton of depth. The guitar distortion isn’t over done, the drums are perfectly recorded, and the vocals are spot on. I also like the backup growling that presumably comes from Marissa with her Cretin experienced vocals.

Extremely Fucking Dead begins with horror (presumably zombie) movie sound effects to get you settled into the death theme. Not just dead, but been-dead-for-a-long-rotting-time dead. The intro goes right into the first song, ‘Crepuscular Crescend’, which has become one of my favorite tracks on the entire album. What I appreciate most on Extremity’s sound is that they can quickly change timing without missing a beat or completely changing the feeling of the music. Every instrument goes along with the beat of the drums and the vocals keep consistency. It’s a huge pet peeve of mine in death metal, but they make it work.

‘Chalice of Pus’ is the third song on the album, and the most disgusting song title possibly ever. But the song comes in with powerful screaming emotion, almost like a howl. The drumming on this track is my favorite for the album. The cymbals carrying along the beat and are at the forefront of the sound. There is also a lot of interesting guitar work, especially around the first breakdown. The hectic guitar solo that bridges the song together. But the best part is that there is more – a heavy breakdown complete with a talented guitar solo with an acoustic part in the background. The bass also shines through during this part. This part of the album evokes a little bit of a different feeling – more sludge, more emotion, and more rhythm.

The album wraps up with ‘Fatal Immortality’ and ‘Extremely Fucking Dead’. ‘Fatal Immortality’ has more backup vocals that works well with the guitar. The solo is also pretty bad ass with some heavy finger picking. ‘Extremely Fucking Dead’ finishes everything up with a bit more chaos. You can tell they let it all out for this track. Distorted and heavy guitar and some pretty interesting tricks for the solo. If you listen closely, the drums are also doing some crazy solo stuff towards the end of the track – almost like a brutal cadence. But the end of the song is perfect to end the album, leaving you wanting more from Extremity. I will definitely be on the lookout for more releases from them in the future, and I can’t wait to catch them live.

Extremely Fucking Dead releases April 4th, 2017 from 20 Buck Spin records. Mark your calendars! You will not want to miss this.