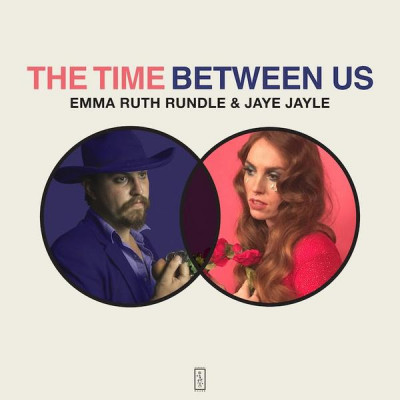 The Time Between Us by Emma Ruth Rundle and Jaye Jayle

The sign of a good split record is the blend of “come for what you know, stay for what you don’t”, and The Time Between Us is an excellent example of this.  Regular Echoes & Dust visitors will certainly know Emma Ruth Rundle, as our end of year favourite albums poll saw her incredible Marked For Death opus beaten only by David Bowie’s Blackstar to the top spot.  Jaye Jayle is a bit of an unknown quantity in this particular room I have to admit, but this is the joy of sharing record space.

Young Widows frontman Evan Patterson heads up Jaye Jayle, an outfit that takes country and the Blues and strips the whole affair right back to almost nothing before adding a couple of bare electronic elements that really shouldn’t work, giving us a finished product that really does.  ‘About Time You Came To Me’ is so delightfully odd, constructed from such completely disparate elements that it’s almost entirely understandable that hardly anybody (if anyone at all) thought to combine them before.  It’s a step outside the box that works really well: Kosmische-Country really is the only way to describe what Jaye Jayle is putting out here, and it works a treat.  The guitars and vocals are pure Americana drawl and laid-back groove, behind these sit a metronomic drumbeat and synth tides straight out of the 1970s.

This is the first I have encountered Jaye Jayle, and I absolutely love it.  ‘Unnecessarily’ conjures up vocal comparisons with Gavin Clark laid over dead-slow percussion and guitar/synth drone that remind me of an on-message Echoboy, whereas the final contribution of ‘Hope Faith Country’ adds violin to an even slower, almost conversational piece in a vague Sun Kil Moon lyrical style, presented as a spacey dirge.  This last song is short and cuts out rather abruptly, giving the listener a definite sense of “more please!” about it.  This side of this record isn’t merely different for the sake of being different, it’s different for the sake of being bloody good.

Moving on (or, more accurately, back), Emma Ruth Rundle’s contribution further cements her songwriting and performance position as someone a lot more people really need to be paying attention to.  Two new songs are presented here, along with an acoustic version of ‘Hand of God’.  This new take retains the power of the original thanks to the sheer drama of the whole, although the hushed tones here bring her closer to the listener, coming across more as a gentle prayer than the original’s forceful curse.

Opener ‘The Distance’ swings sadly on late-period Pink Floyd chords and floats gently upwards in volume, carried by that incredible voice that always manages to soar that little bit higher than you would expect it to, coming to rest as gracefully as it took off.  ‘To Fold In England (Hours)’ brings in strings as a distant underpin to yet another quiet storm of a song that breaks at its denouement.  ERR’s songs have a strange effect on me in pretty much the same way that Nick Drake’s Pink Moon does; certainly not musically but emotionally, where whatever mood you bring to her songs (good or bad) is amplified and coloured-in by the sheer control exerted on some pretty tough subject matter.

If you are already a fan, this is more to add to an impressive collection.  If you’ve not previously been introduced, these three tracks will almost certainly make a fan of you.  The two artists are touring Europe together in April and May, keep an eye out for them as the evidence here suggests they will be a rather singular night out.