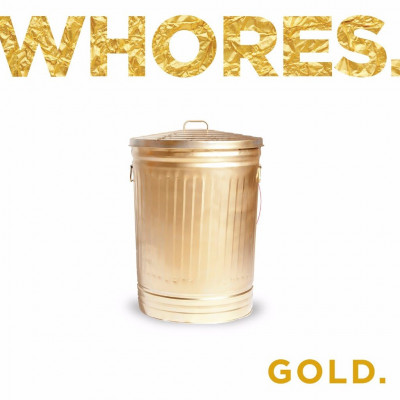 Whores. are a band from Georgia, Atlanta who have recently released their first record, Gold.

This is furious noise rock that veers between a slow, sludgy Torche style and frenetic blasts of metallic punk that wouldn’t be out of place on an old Motörhead record. It’s rock stripped down to the bare essentials – the arrangement sticks to traditional structures, and there is very little complex instrumentation. Math rock this ain’t. However, that doesn’t matter, because if you like that Kowloon Walled City-vibe of “as simple and as heavy as possible”, then this record is a killer – writing songs this simple that have good hooks that stick is a much bigger challenge than writing meandering prog or post-rock, in my opinion.

The opening track roars into life with the lyric “Where’s the money? / Where’s the fame? / I was told by now they’d know my name!” and the album continues in that vein – dealing with frustrations of being an almost-made-it, almost-made-it! band that’s been going a good few years now and recently starting to gather some buzz, but buzz doesn’t pay the bills. Actually, at this point, even getting signed to a major doesn’t really pay the bills.

My only minor niggle would be that I like the production on their earlier EP Clean a bit better, especially the space given to the vocals and furious octave’d guitar in what I consider their standout track, ‘I Am An Amateur At Everything’, but I think that’s just personal preference – the tracks on the new record can sometimes seem like a lot of heavily distorted stuff is occupying the same space. However, the production being crowded, filthy, and aggressive seems like something the band were deliberately going for.

This record came out late last year – this extremely late review being one of the casualties of my trying to get through all the good stuff that came out last year – and was one of my contenders for AOTY 2016. Coming off a US tour with Red Fang and Torche last year and a European tour with Big Business this year. I’m looking forward to seeing them to see if they live up to the records. All in all, I highly recommend a listen of both the album and their back catalogue of EPs.