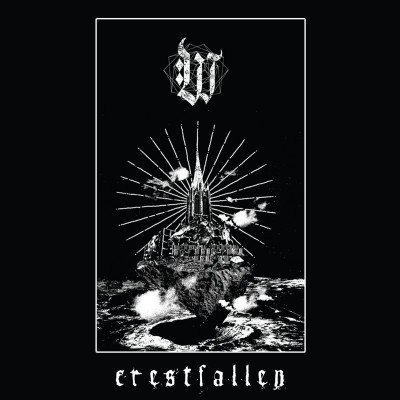 >When I was given the chance review this album, having heard their 2015 demo, I jumped at it. So often these days sludge is kinda boring. So many sub genres of sub genres of sub genres. Metal in general has become rather over populated with mediocre bands. Praise Iommi, worship Sabbath blah blah blah. Maybe I’m getting old and cynical, but that’s how I see it and don’t get me fucking started with bands with bong in their name! Anyways, we are not here to talk about how shit I think most bands are, we are here to discuss the new Weltesser record Crestfallen.

Crestfallen is fucking awesome! Weltesser are a band that, to my knowledge, have only existed for 3 years or so and is comprised of Ian Hronek, Nate Peterson and Mike Amador. The trio was formed in Saint Petersburg, Florida. They play a style of crusty, pissed off sludge that is very immediate with absolutely no fucking about (this record is done and dusted in just over half an hour). Apparently the band was formed from a love of Black Sabbath and His Hero is Gone, which is kind of the perfect way to describe their overall sound with a very definite nod to both very apparent on Crestfallen, which is certainly no bad thing. Given that their other bands (Hronek and Peterson play together in Rotting Palms and Hronek and Amador play in Landbridge, both are well worth checking out) are faster affairs this certainly gives the trio a platform to rain doom and gloom down on the Florida sunshine.

Crestfallen is 6 tracks in 34 minutes. ‘Regret’ opens the album and sets the tone for the remainder, thick walls of guitars, huge war drums and guttural roars that hark back to somewhere between heavyweights Morrow and Williams, yes really. The intro to the next track ‘Guide’ REALLY puts me in mind of Iron Monkey, a monstrous bass riff and drums with so much fucking groove before the guitar riff descends and brings the whole thing crashing down around me, the vocals are spat with pure disgust, I would hate to be enemies with this lot.

‘Living to Try’ is more of a slow burner and is one of two tracks on here from the demo I mentioned earlier. It builds on layers of feedback and static before the drums lead us off to war once more, it remains tense, picking up pace towards the half way point where the tempo turns on a sixpence, introducing more groove but only for a minute before we are beaten and dragged back in to the murky depths in a squalor of feedback and cymbals. Weltesser know how to write riffs, horrid, off kilter riffs that have a real unsettling quality, and the outro to this song is one of my absolute favourites on here.

‘Terminal’ is metal as fuck. It puts me in mind of all the great metalcore I loved when I was growing up, complete with dischords and a big moshy breakdown in the middle, with an absolutely savage vocal and outro. ‘Rats’ is the other rerecorded inclusion from their demo. ‘Rats’ is the first Weltesser song I heard and it puts me in mind of Godflesh, maybe it is homage, or maybe it is coincidence. Either way it’s great, big slabs of guitar feedback, with more of those Bill Ward on steroid drums keeping the whole thing running.

Album closer and my personal highlight on here is the title track, which opens with the line “You’ll amount to nothing!”. What follows is 8 minutes of bleak and miserable doom, riff after riff after riff that will have you banging your head with your fist in the air. This band have a knack for changing things up from bleak to groove and back again with such precision. There is a short passage in the middle of the track that gives you a short respite from the anger and hatred being roared at you but that light relief doesn’t last long before the monster riff lurches back in before the song and indeed the record is ground to a halt by low end toms and piercing feedback. You’ll amount to nothing, the same cannot be said for Weltesser.