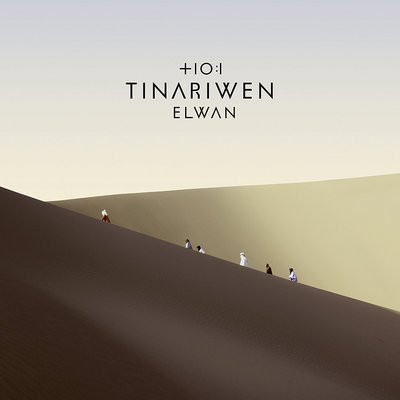 Fusing together relaxed electric blues-rock and musical styles from their home on the border of the Sahara Desert, Tinariwen deliver a soulful sound that is uniquely theirs. The heady, almost dream-like mix of traditional instrumentation and blues-rock, alternatively known as ‘desert rock’ and is exhibited at its best on their latest offering Elwan.

Where predecessor Emmaar was reserved, slower, and mournful, Elwan opens with unreserved gusto. ‘Tiwàyyen’ opens the album with what is by previous standards a relatively fast tempo, setting the tone for a more uplifting and joyful album than Emmaar. Call-and-response vocals in the style of Ladysmith Black Mambazo are threaded through the song, interrupted occasionally by joyous shouting from a backing group. The song’s tempo gradually accelerates towards the climax, and the rest of the album continues in a similar vein. ‘Sastannàqàm’ follows at a similar tempo, rocketing through a song that would not sound out of place on a Jimi Hendrix B-side. The pace lets up only occasionally, with ‘Ittus’ and ‘Nànnuflày’standing out as slower numbers. The music never feels rushed, however, and maintains a relaxed atmosphere overall. By contrast, Emmaar almost dragged in places, and exhibited a more mournful atmosphere.

Not only is it generally a more joyous album than its immediate predecessor, it also represents the sum of the musical journey Tinariwen have so far undergone. Over time they have eschewed the more traditional tribal singing of earlier albums like Aman Iman in favour of the call-and-response vocals demonstrated on ‘Tiwayyen’. Indeed, ‘Nànnuflày’ contains some vocals in English. Only the tindé drum, and the flute on the intro for ‘Fog Edaghàn,’ remain to show off the more traditional side of their music. The acoustic guitar, so prominent on Tassili, is vastly scaled back here, but is thus given more potency when allowed out to play: ‘Ittus’ is a gorgeous acoustic song, slow, and easy-going but without dragging. The meloy calls to mind ‘Yamfa’ the final song on New Ancient Strings, a collaboration between Toumani Diabaté and Ballake Sissoko from 2000. Instead, Elwan exhibits a sound driven most prominently by the electric guitar, played in a bluesy style that a seriously laid-back John Lee Hooker would have enjoyed. The tindé drum is also maintained, merging together a dreamy blues-rock atmosphere with the traditional instrumentation of Mali.

Tinariwen’s sound is not just a patiently crafted fusion of the modern and the traditional, but is also steeped in the personal passions of the band members, namely the political situation of their homeland, Mali. Emmaar was recorded in a state of self-imposed exile while Mali endured a civil war, and its mournful, slower songs powerfully evoke the grief and fear for a nation under fire. By contrast Elwan is free from such political overshadowing, and listeners can feel the celebration in the melodies. This, in turn, helps make the album more accessible for new listeners who might be otherwise put off from the emotions underpinning Emmaar. Equally, the shedding of the traditional instrumentation and vocals from albums like Aman Iman opens up their easy-going blues rock sound to a wider audience than the ‘world’ music aesthetic of Amassakoul.

Ultimately, Elwan is a fantastic sum of the journey so far, and an intriguing gateway for the future. Wherever they go from here, Tinariwen will continue to be ones to watch.