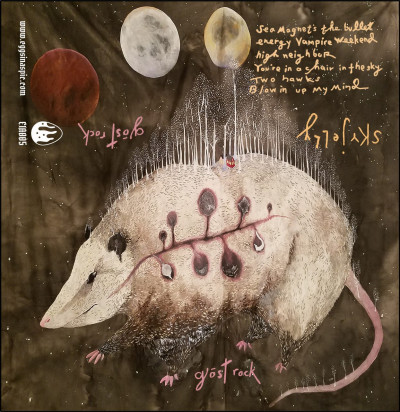 Whilst, I’m now aware that this is Skyjelly’s sophomore album, Góst Rock has been my introduction to the band and will likely be a first listening for many people hearing the group through Eggs in Aspic. I will say off the bat though, Eggs has yet to release anything that hasn’t been more or less essential listening. The album is a unique experimental, snow-shovelling, warm, fuzzy, hard to describe treat…and reminds me of only the most excellent of melancholic chilling-out bands.

From the opening lo-fi, almost beatbox drums reminiscent of The Beta Band and I guess the likes of Beck, I was drawn into what used to be called a sad ‘college rock’ diegesis of clothes strewn about a dorm floor and failed attempts at romance, all with the best of intentions and met with the reality of a soul-crushing existence. The slow, roaming guitar reminds me of the sad, restrained side of Dinosaur Jr. as much as it does the more accessible art-rock annals of post-punk. It’s a weird way to get into a band as a track; a weird way to start an album, I feel like I’m walking into the middle of a conversation like the story is not told to me from the start but thrust at me in the strangest way like the disorientating opening of Eternal Sunshine of The Spotless Mind. ‘Sea Magnet’s The Bullet’ lands us exactly in what feels like an almost monotonous, endless cycle of emotion, I guess in that sense its more like Clerks, these are cool, relaxed characters and yet, ultimately, pathos is very much under the surface of everything that is going on. This is an album that seems to start by saying to the listener “here, we go again…and again we’ll go here, going forward”. This is a band capturing what it feels like to try and carry on despite and try and have a good time despite everything seemingly being shit and not worth anyone’s time.

Each vocal is delivered with a tired, endearing drawl, like there’s no point in even trying, like the whole band has given up hope but carried on; like seemingly the whole western world over the past decade. We’ve regressed. Apathy, in the 90s was about non-conformism and making fun of the idiotic idea of prosaic life in a capitalist society that would never change, then stuff started to change, people listened to and related to the apathy and the abandon (as they had in the past) and the progression and dare, I say it hope, even seeped into politics, we all wanted to get further away from war and terrorism and towards societal progression and we did and then it all went fucking wrong. The Obama-era and the fucking excessive progression of technology and diversity disenfranchised the anachronistic (the bigoted and uneducated) and selfishness and greed took over once again; now, all the best artists seem to be saying, “what’s the point? it’s all a joke. Fuck it. Fuck it all”. Everyone’s given up but, they’re moving forward out of mere survival instinct; the ironies gone, the pretensions gone and we’re all just trudging forward: keep calm and carry on, we won the cultural war and lost our faith in humanity. It’s like we showed a toddler how to use the potty and he angrily smeared his shit all over the walls in defiance. It’s all just a haze of depression posing as hedonism now for the sake of politeness.

‘Energy Vampire Weekend’ starts off with a heavy-footed bassline, soldiering on in a way that makes me wanna sway; I guess it is like the 90s again. It feels like the end of a long night of drugs (be it legal or better), dizzy guitar playing, ear-pleasing rattles of percussion like playing with a set of beads and squawking lead guitar jamming all the way against the worn-out vocal; like the whole band is fucked and its brilliant. The jam-aspect is getting lost on a lot of bands, I feel like Eggs in Aspic is doing well to promote a lot of band who have this seemingly bygone aspect of music back into the foreground; it feels more unpredictable and fluid and therefore, more intuitive and human. I dunno, being tight and precise is great but, if you can make me feel something or like I relate to you then you’re music is probably a lot stronger than most of the shit that’s out there.

Speaking of strong shit, I want ‘High Neighbour’ to be a stoner-comedy so badly, imagine a scene from Friday or Pineapple Express with this song in it? It sounds like somebody leaning out of their window to smoke a joint only to find the person across the way sparking up at the same time. I’d have added two seconds for full cannabinoid reference but, hey, this is the absolute standout track for me, it’s fucking lovely stuff.

‘You’re in a Chair in the Sky’ leans into the weirder side of the album delving into the deserty atmosphere we all love that treads the ground of Grails and The Doors but, in the case of this song infuses a jam band sound into slacker heart creating pure psychedelia in the process. Its laid back Santana vibe and free-flowing structure make it good background music whilst also being entertaining introspective music to sit in a ponder on your own; those twangy bass plucks in the middle do remind me of Chasing Amy though; I wonder if these guys work in retail or love Kevin Smith movies? Hit me up.

So, the twang is back in ’Two Hawks’ and its definitely the same band lead guitar and percussion wise but where the fuck did this vibe come from? I was forewarned by captain Fenwick leader of the Eggs in Aspic free-folk that this was an eclectic album that would take me by surprise but this track was the first time, I literally thought “what the fuck?” on the album…in a totally good way though. See, I enjoyed the differences between all the tracks elsewhere on the album but, when this one came in it felt like I’d turned on a whole new album by the same band. Points for stellar lead guitar work and surprising twangly rhythm work at the start but, as a band the exploration on this album is just superb. It goes in all sorts of directions whilst retaining this kind of endearing, effortless core.

The vocals take the forefront for their boldest showing in ‘Blowing Up My Mind’ as it opens almost acapella but slowly expands out into a kind of lo-fi, crumpled Siskiyou-esque track (whose album ‘Keep Away The Dead’ I consider essential listening – check it out – they’re pretty small but exceptionally brilliant). This closing track in many ways feels almost like a pessimistic reflection of the opening track, blending all the strongest elements of the album and stripping that casually crooned vocal down to an austere groan for emotive effect before tearing into one last bassline almost like a sigh of release.

Góst Rock is a highly enjoyable, easy-going album for slackers, stoners and Sunday afternoon kind of people that kind of feels like a natural soundtrack to a Kevin Smith movie or a James Franco/Seth Rogen kind of flick.