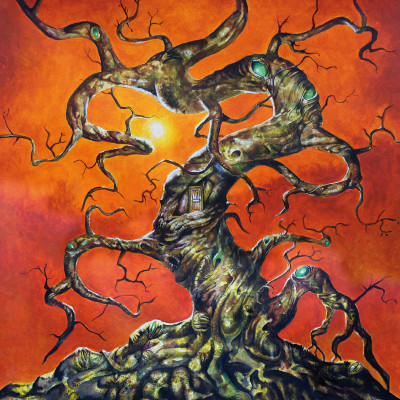 Despite committing any number of crimes in the eyes of the grammar police, Kairon; IRSE! certainly made more than just an exclamation mark with their second album Ujubasajuba in 2014. It was an enthralling, explosive ride through the largely unchartered territory of psychedelic post-rock, additionally incorporating elements of shoegaze, progressive rock and generally being smashed out of your skull on some rather fine acid.

Hailing from Seinäjoki, a small city in western Finland, this innovative, experimental four piece now present their third record Ruination. It sees the band move definitively in the direction of classic Prog (yes, with a capital ‘P’- call me out, if you must), with track lengths on 3 of the 6 on show stretching toward 12-13 minute proportion, and the whole album dispensing almost entirely with the previous blitzkrieg of noise, and focusing instead on bringing a trippy, pastoral and more refined, spacious style.

Despite the move to a less abrasive sound, the willingness to dive head first into the previously unheard is very much alive and well. I made a list of the potential genres that this album could/doesn’t fit into, and I had psych, post-rock, math rock, folk and prog within the first 45 seconds of the album starting.

The opening 25 minutes of the record sees Kairon; IRSE! swimming wilfully into mysterious, sinister waters. ‘Sinister Water I’ has psych guitar, dark atmosphere, mathy rhythms and heavily folk-infused vocal harmonising, which calls to mind short-lived Swedish shoegazers Fields as much as it does Pink Floyd and Jethro Tull. The track breaks out at 3:40 with a fuzzed out bassline straight from Black Rainbows’ school of heavy psych, before the irregular time-signatures and general bonkers-ness returns. It is a challenging listen, as the band splice together seemingly un-related sections time and time again, but the end result is richly entertaining. Although I defy anyone to dance to it without looking like they have large pebbles in both shoes.

The remaining tracks on the album continue with the more contemplative side to the band, with the folky, hushed dream pop and minimal percussion of ‘Llullaillaco’ and the largely reflective, organ-led ‘Ruination’ contrasting starkly with their earlier material. Best of the bunch is the substantial (in more ways than one) ‘Porphyrogennetos’, which has a beautifully airy, spacey quality to it. The earlier swirl and rapids of sinister waters has gone, and been replaced by a calm, crystalline ocean. The melodies are rich and diverse, with Dmitry Melet’s lilting, arcadian vocals fitting the blissful mood perfectly, before a single, wailing guitar takes the track to a noisier conclusion.

Unfortunately, the sheer volume of ideas on this record, the breadth of sound, and the bravery and conviction of the players, will probably not provide Kairon; IRSE! with the profile and exposure they deserve. They push the boundaries to such an extent that they are a band that one must invest time in, and for that reason they are likely to remain an underground concern, but a thoroughly loved and highly valued one at that. For those that know.