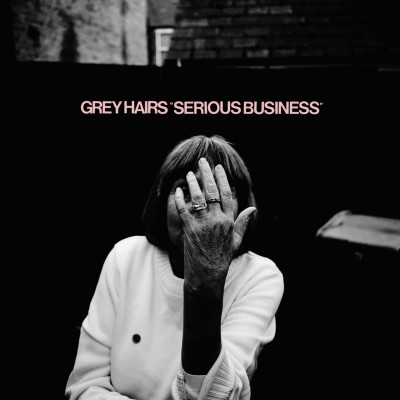 There is a lot of good music coming out of the Notts area of late, from the underclass anthems of Sleaford Mods to the artful classic rock of Church of the Cosmic Skull. It’s not necessarily massively innovative, the forebears are visible, but there’s enough personality and songwriting skill to make it all very exciting. You can add grunge/surf rock revivalists, Grey Hairs, to the list. Serious Business is their second album and it is seemingly a vehicle for the band members to work out their frustrations in one of the healthiest ways a bunch of reprobates approaching middle-age can.

The album opens with title track ‘Serious Business’- full of beer and loathing, drinking being the serious business at hand. No gleeful take on after-show hedonism, this has the green-in-the-gills air of a man stuck in a purgatorial Wetherspoon’s for lack of anything more exciting to do in his life. This ain’t no party… in fact several tracks here share the same male menopausal rage as Pissed Jeans.

Now, grunge was always a close companion of ‘complaint rock’; the originators were of course younger when it started and the attitude was more snotty adolescent than grumpy parent, but it works just as well. Everything else is remarkably familiar to fans of nineties US alt-rock; ‘Man Is A Kitchen’ has the manic air and pounding drums of Tad, ‘Off and On’ finds Amy replicating the gorgeous backing vocals of Pixies/Breeders Kim Deal, the fantastic ‘Sausage’ has all the dry, spare menace of classic Fugazi etc etc. You too can have fun spotting the influences on each track. It doesn’t detract from the album at all, I love this music and it’s great to hear it played so well.

Connoisseurs of the genre may particularly enjoy ‘Pat Was Right’, which revives the grotty weirdo rock of Alice Donut and contains the brilliant opening lines –“No cash back, no cash back, that’s my axe to grind”. And it’s not all Stooges riffs and punk aggression, Grey Hairs can get more poised and sophisticated too – ‘Red Paint’ summons the voodoo surf cult of The Gun Club on a pot boiler of real sultry power.

Serious Business works equally well as primer and tasting menu for those unaware of the rich bounty of early 90’s alt-rock or grin inducing celebration of our youth, for those of us old enough to have grown too fat for our Mudhoney Super Fuzz Big Muff t-shirts.