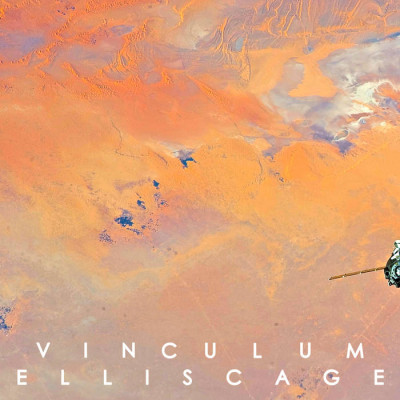 Ever since I was a kid, I’ve been obsessed with space and all the stuff we’ve sent out there to look at it. Watching Carl Sagan’s Cosmos with my Dad, having lessons at school interrupted to watch Space Shuttle launches, right through to recent years spent gazing at the heavens through a telescope with a bottle of wine in tow.  The greatest of all outdoors is in my very nature.  A couple of endeavours in particular chime with me: the first is Voyager 1’s gold record, carrying music from Beethoven, Bach, Berry, Blind Willie Johnson and representatives from elsewhere in the alphabet; and our continued robotic exploration of Mars.  These both evoke a special sense of time, distance and loneliness, and Australian composer Ellis Cage matches that feeling perfectly with Vinculum.

That this is a strange record is something that becomes apparent almost straight away.  ‘Intro/A Familiar Face’ sets Vinculum’s store out immediately with its blend of deep, droning, spacey electronica and collected memories of Earth’s musical history.  Inspired by Béla Bartók’s collection of the Folk music of Algeria and Tchaikovsky’s 50 Russian Folk Songs, this is music that has been collated and reworked to incredible effect.  The listener is given the best example of this early on, ‘Beriozka’ has a collection of strings creating a vast and almost overwhelming central chord with strains of melancholy Eastern European folk violin floating occasionally to the surface like memories.

It’s a highly ambient album, but Vinculum is very kinetic with it and doesn’t allow you to just let it wash over passively.  The combination of electronics and orchestra is pitched so that the listener is gently coerced to notice everything that goes on; like Eluvium it’s an almost uncomfortable beauty where the strength of the music pushed out along with the addition of the more human elements (such as the chanting during ‘Once I Was Water and Pure’) becomes almost pleasantly unbearable.  You certainly feel as though you’ve been more involved than usual after listening to this as an almost-palpable pushing of sound is used throughout the record, making the whole affair somewhat tidal in nature as it ebbs gracefully and flows forcefully without.

This is not music to be sat indoors listening to.  It is best experienced outside, preferably at night and ideally moonlessly, gazing at the heavens, as Vinculum certainly helps with the vague understanding that staring up at the night sky is something that takes in an incomprehensibly huge amount of, well, space.