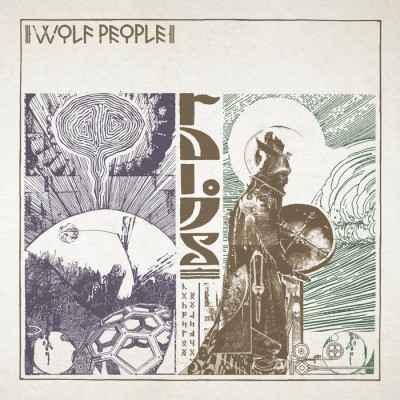 After two albums (and another collection of threads), it’s a bit odd on the surface to see a band going back to their roots with such gusto.  Then again, when the band concerned is Wolf People it’s not so much a quest for any hitherto lost identity, it’s because their best work comes from this part of their collective psyche; a desire to be connected at the place where everything else grows from.  This is something that works beautifully for them.

The connection begins even before a note is heard.  The cover artwork, reminiscent of an early edition Alan Garner novel, comes from the hand of Luke Insect who created the sleeves for three of the band’s early singles.  It’s artwork that is psychedelic and ancient, seemingly simply created yet manages to encapsulate where Wolf People draw their focus from and – more importantly – what they are currently doing with their craft.

Following on from their stately Fain album, Wolf People have taken the step of messing with their own formula a bit.  Seemingly investing the profits from their preceding record’s sales on lots and lots of pedals, Ruins is a very deliciously mucky-sounding record throughout.  Right from the start, ‘Ninth Night’ is almost 100% distortion from backline to frontman, with only a gentle acoustic intro and brief, curious Wicker Man winks appearing both in the lyrics and music.  The sound is big and brash and doesn’t so much demand louder than necessary playback as turn itself up when you’re not looking, whether you want it to or not.

There’s a nice bit of Red Shift-esque timehopping going on as well.  ‘Night Witch’ with its direct chorus coupled to Wolf People’s fondness for dark folk phrasing would almost certainly forgive the listener for thinking that this is another Hammer-evoking caper, but the sound of aircraft engines at the start leads to a bit of deeper reading to find that the Night Witches in question were the Russian 588th Night Bomber Regiment, a unit made up solely of women using outdated biplanes to silently (they cut off their engines when close) bomb German lines from 1941.  Their story is a breathtaking read done justice here with a real corker of a song, which I originally scribbled down as “Black Sabbath Live in Pompeii” when I first heard it and still stand by.

The highlight of Ruins comes not once, but three times.  ‘Kingfisher’ starts life as a gentle view on a burgeoning, blind romance with a welcome return of Stick in the Wheel’s Nicola Kearey assisting on vocals, but the real joy comes from the song’s back end where the band really come into their own with a stunning extended instrumental that they clearly enjoyed doing so much that they do it again via not one but two reprises, and these combine to provide one of 2016’s true musical highlights.

Sometimes the fun of reviewing records comes from laying out the whole thing and going “look at this!” because it’s hard to leave anything out.  With Ruins, it’s far more enjoyable to just scratch the surface, say how brilliant that is, and then leave the rest for the ears of others.  As I write this, I am in the throes of compiling my Top 20 for Echoes and Dust.  With each track it’s creeping up through the list, buggering up careful planning and I couldn’t be happier.  It’s noisy and psychedelic and beautifully-crafted and just a joy to sit and listen to.