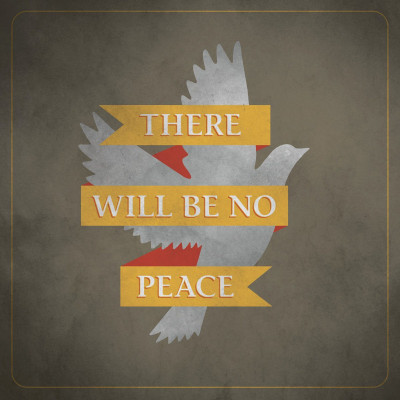 There Will Be No Peace by The Angelus

It is perhaps apt that one of the most uncertain years in recent memory is heralded by an album from The Angelus.  For if there’s any one thing they excel at, it’s expounding portents and warnings aplenty.  Hailing from Denton, Texas, this is a band who are well aware of their local musical heritage (not least by being a decent-sized, if largely unsung, part of it) and continue to push it onward and upward, even if the onward and upward mood described by these guys is of a Sisyphean bent.

After a couple of tracks of There Will Be No Peace, it becomes very apparent that this is not just a collection of songs.  Each track bleeds into the next, creating a record that flows as a single piece. What’s surprising given this approach is that each song contained within retains its own identity, pace and volume without it seeming weird in the context of their immediate brethren.  The Angelus have also brightened up a bit as well since their preceding album (On a Dark and Barren Land), as the onus here is less about death but about life – this being The Angelus however, the life in question is an unquestionably, unrelentingly difficult one.

Given their geographical context, one thing that isn’t a huge surprise is how The Angelus sound; their landscape not musically and spiritually dissimilar to that of their more famous neighbours Midlake and Lift to Experience, the latter especially feeling like a close relative thanks to the chiming guitar sound and close-knit performance of the trio, as well as a fairly biblical approach to their songcraft.  It comes across as slightly quieter affair than before, although they do have this knack of always sounding louder than they actually are thanks again to the tight-knit arrangements that seem as though this was recorded with all three performers never more than a couple of feet apart from each other.

The serene question of opener ‘Will There Be Peace’ (answered in the negative with the first line) gives way gracefully to the chaos of ‘Thunderbolts I Scatter’, setting the tone for the album as a whole (as well as closing it in palindromic fashion, both tracks merged and reprised at the end).

There Will Be No Peace’s standout track for me is ‘An Interceding’, breaking up the Southern Gothic atmosphere for something incredibly close to a latter-day Joy Division.  It’s perhaps this brief exchange of one Denton for another (for there is also a Denton in Greater Manchester) that really caught me off guard; it’s also the seamless transition back again when ‘As I Live And Breathe’ morphs gently and slowly back into more familiar Texan territory before bursting into a joyous chorus that really shines among the general and beautiful pessimism on display.

The album’s point is driven home towards its end; ‘It’s a Hell of a Climb’ and ‘The Other Side of the Mountain’ fit together as a tale of a life spent struggling, only to discover that salvation doesn’t necessarily appear and hardship doesn’t necessarily end once the summit is reached and crossed.  It’s a gloomy point, but ultimately it’s a point well made.  The Angelus seem to have not only captured the mood of these times, they’re also walking it through the streets with a bell round its neck for everyone to see.  There Will Be No Peace is a record that deserves to lift The Angelus up among their peers.