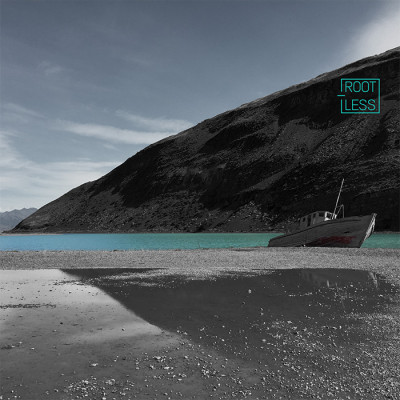 Rootless frontman Jeremy Hurewitz continues exploring ambient guitar work with Distant Cities, his first release on Virginia-based cassette label Otherworldly Mystics. The title to the four-track release is appropriate as Hurewitz has spent over a decade abroad exploring the globe’s hubs as well as its nooks. The Rootless moniker derives from this untethered existence of global nomadism. The album’s striking, alien cover, shot by Hurewitz, depicts a ship on a desaturated shore. It captures the dueling emotions of aloneness and possibility one feels when departing a vessel and stepping onto another world’s terra firma.

Hurewitz plays a sampler and guitars that run through multiple effects units. The effects are the rig’s nervous system and provide the color for the tracks. What distinguishes this album from other organic ambient works is Hurewitz’s passion for literature. Each track features his voice, flavored with a vintage quality aligning him with authors of the classics. ‘No One Thing’ and ‘The Rain’ contain words by Robert Creeley, and ‘Every Nuance’ features Arthur Rimbaud. Lyrical presence contributes both viewpoint and intent, creating a different listening experience from the strictly instrumental. For some, ambient music provides background sound in times of concentration; words interrupt the flow. Prose clashes with this tradition, which may prove distracting to some, but the vocals are not omnipresent, usually sprinkled at key points of the track or at the beginning to set the mood. All but one track is under seven minutes; across such temporal expanse, spoken words are islands of interest, functioning as amuse-bouches rather than main courses.

‘Limitless’ contains the best example of voicing, a Paul Bowles sample about mortality. It arrives without sonic provocation, but acts to affirm life, similar to the existentialists’ aim. A snarling, undulating guitar line answers Bowles, and a collection of acoustic guitars take us out as we ponder our larger place in the world. The evocative poetry in the Eno-like ‘Dandelion Souls’ heightens the acoustic track’s emotional swell. ‘No One Thing’ uses the Burroughs/Gysin cut-up technique to shift the words of “no one thing anyone does.” Foregrounded uptempo drums provide momentum, subtly shifting and reversing through Hurewitz’s multiple effects units. It’s a familiar track, getting regular play at Rootless’ seven-month Brooklyn residency at Muchmore’s.

‘No One Thing’s’ accompanying video is a VJ mashup of inverted clips that mix city and pastoral locales. The beach mixes with the bustling city, a carnival merry-go-round with undulating waves, juxtaposing aspects of life that are sometimes in tandem, other times opposed. Comparisons to the Koyaanisqatsi films abound.

Hurewitz makes discerning use of clean guitar timbre throughout, but his choice of synth samples can leave something to be desired. The opening choir sample in ‘The Rain / Limitless’ is one case, as are some of the rising synth swirls in ‘No One Thing.’ ‘Dandelion Souls’ gets it right in usage of understated, diffuse pads that provide a bed for the acoustic guitar work. Though ambient songs tend to feature long durations, the driving percussion on tracks like ‘No One Thing’ creates an anxious momentum, anticipating further activity that plateaus instead of building. Still, the orchestration of the tracks, and how they take their time in revealing themselves, combined with the earnestness and delivery of the poetic lyrics, provide for an engrossing listen that navigates the listener on a journey across wide expanses perhaps not all that distant.