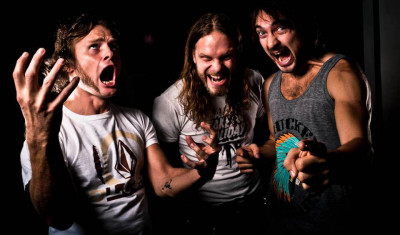 When we start recording we don't know exactly what is going to happen because we don't write complete songs and then record them.

(((o))): Your latest album V sees the band taking a different direction, is this a natural evolution or a conscious change of direction?

(((o))): How was the experience in recording and writing this album?

Dango: It was fun! most of the time, but also quite energy consuming and we almost got crazy in the end. I say, we do everything ourselves, I mean, obviously we write the songs and record and I mix everything and I master everything so I almost lost my mind for a while in spring! But, the experience in all was long, what can I say! When we start recording we don’t know exactly what is going to happen because we don’t write complete songs and then record them. We write, like, outlines of songs and then we compose as we go and some parts we know exactly what we are going to do and some parts we say, ah well, the drummer can play something here and then we can work something out. So it is very different how much is added afterwards.

(((o))): Considering this, did the process for writing/recording the album change when compared to earlier records?

Dango: No, not really, we’ve been doing it in the same way for the three albums now because we’ve haven’t had set drummers in that sense. So, what we do with me and Oskar, we meet up and then we compose stuff and then we listen to ideas recorded maybe in the soundcheck or some jam that we do, when we jam with the drummer and sometimes we just sit down and compose out of our heads. So it’s a little bit different and then most of the time maybe we have one idea recorded, like a jam or an idea and then we compose something out of it or take one piece here and then one piece there and then feed it together. So, I think it feels more like composing than just jamming and writing songs in that way, it’s, like, almost like classical music.

(((o))): I can hear some real prog influences on V, are you personal influences as musicians changing or evolving?

Dango: Erm…musically, I don’t know, I’m not sure. I don’t feel super-influence anymore by something, I have my favourite bands that I have had for ten years, or at least. So nowadays it’s more that we are not influenced by others, but that we are finding our own things and doing what comes out of us, without any other music effecting us. And we listen less and less to other music and especially the period when we are recording and writing. The brain is so full of music and sound so it is impossible to listen to music then.

(((o))): Örebro isn’t the most obvious place for a desert/stoner rock band, can you talk about the early days? Was it a few buddies jamming for fun or more of a singular vision?

Dango: (Laughs) No, it was only for the fun in the first place. I mean, also and a mutual friend, who was the man who introduced us to Kyuss in the first place, they recorded just for fun because we started sound engineering together and then they did another sound engineering class the next year and they had to record something, to practice. So they wrote some songs and recorded them and then I heard it, and I was like, hey guys this is much better than your other band! Let’s do this band for real so then we just, well, we started a band! We had this thing about how it should be, you know, so much stoner, the sound should be more fat than Kyuss and we should have this Mexican sounding artist names and everything and it was only a big joke almost. But very fun and we were laughing about it so much. But then as time just passes by so quickly, it just gets stuck, you know, it’s not like three years later, you can change your artist names or, you know, doesn’t really work like that. So, no, nowadays for us, I mean we still do it because we think it’s fun, but of course, it’s a totally different serious level now and this is our job and also we are older and more aware about life and society and now kind of have the vision that we maybe can effect something in the world for the better and we try to. We have more serious lyrics of course and try to say more serious and things in interviews sometimes (laughs).

(((o))): Fifteen years and five albums what makes you still want to do this everyday?

Dango: Because it is more or less the only thing that’s still fun, I guess. The older we get the less things are fun, so, this is still fun! And I think because since we are also progressing, we are trying to do things…a little bit different and maybe because we change so many drummers, as well, we have to progress! I don’t know, well, and also I think it helps that we had, even though it goes slow, we have like a popularity increasing all the time, it’s steady, but slowly increasing so it makes it also I think more fun as we see some progress instead of going BOOM! Maybe you are famous and then the next tour there is half the number of people coming to the shows. So even if that is a band who is more popular than us, maybe they have 3000 people one tour and then the next tour is 1000 people at the shows and I don’t thinks that’s much fun, it’s better for us, we never had 1000 people in a club show (laughs).

(((o))) How do you find touring the UK? Any favourite venues?

Dango: This one! Yeah, Islington (Academy) because we are a little bit nostalgic for this place because we were here with Fu Manchu back in 2007 and it was totally sold out and packed and even when we started playing everybody was here. So, for us, it was the first time we played in front of 800 people and we had lots of friends here and people knew the songs and were standing in the front row and just totally rocking out. So, at that time, and this was almost 10 years ago, that was very special experience for us. So this venue is a little bit special.

(((o))): How has been touring with fellow Swedes Deville (which I’m also a big fan of)?

Dango: Er, it’s been really good., I think Deville are a great live band, they have changed some members in the line-up in the past year. But, I think now they are better than ever. They are really nice guys to hang out with, they are on our record label as well, Fuzzorama. So, yeah, it’s just good. They party much more than we do, though so…sometimes there is too much noise in the night on the bus! (laughs)

(((o))): Lastly, us writers are currently wrestling with our Album of the Year for 2016, do you have any tips for the top spot?

Dango: That’s Truckfighters…V!! For sure! And if not that, Truckfighters Live in London came out this year as well. This is from the last time we were here actually we recorded that one. No! I would recommend We Hunt Buffalo, for example, oh, hang on, was that last year it was released or this year? Maybe it was last year. Asteroid released a new album, just now, III, it’s called. If you like more 70’s rock it’s very, very, very good. Valley on the Sun, is more like rock and roll / stoner rock. It’s also, very, very good. So, I mean I like the bands we put out on Fuzzorama, so, of course, those are the ones I recommend..any of them!! (laughs)