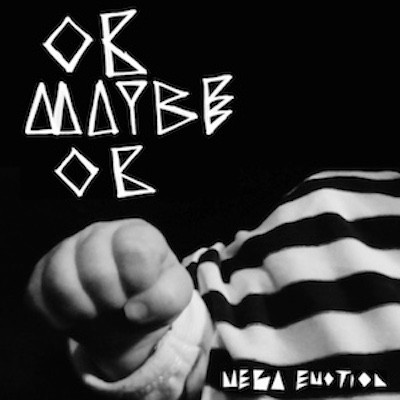 20 January. Inauguration Day in the US. I started drinking as soon as President Trump put his hand on the bible. My hands were steadied by big pharma and gin. It was sad to see Barack Obama fly away in a helicopter. But now, I’m mostly anxious. Anxious about the future, about the country, and about the general state of the world. Anxious about whether or not things will be OK tomorrow. Even though I’d started this piece, and interviewed the band over a week ago, on 20 January, Mega Emotion’s new single ‘OK MAYBE OK’ made more sense than ever.

This feeling of anxiety- and just wanting to be OK, is at the core of the emotional loop on the new single from Mega Emotion. References to Exocet missiles are coupled with Percocet pills. All three of them are shouting, screaming, rending their garments and telling a story very much of our time.  The song starts as hard as a panic attack.  And there is genuine panic in their vocals, the panic anyone might experience in bringing a new child into a very fucked up world.

Last week I Skype’d in with Iain Ross, Lisa Horton, Jan Robertson, and a baby named Suki (who serves as the model for the single’s cover, and stars in the accompanying video).  I pushed for a real time interview because I really wanted to wrap my head around the new song, their process in building a wall of sound with three people, and their pending album, tentatively titled Move, Motherfucker.  They were happy, graciously answered some curveball/idiotic questions, and were honest and humorous in discussing the Mega Emotion approach to writing, recording, and performing live.

Nearly every Mega Emotion song has a veneer of politics. Sometimes the veneer is thick, and sometimes it’s thin- but it’s always there.  “Yeah, the new music is a reaction to the world we’re living in. We’re trying to do it in a creative way, even if it’s just pissing in the wind,” said Ross.

Sonically, ‘OK MAYBE OK’ was ricocheting in my skull during the Inauguration. Lisa Horton carries the lion’s share of the work- putting down a VERY heavy synth bass line, drumming, and looping the rhythm section. She admitted that she needed to quickly teach herself the basics of MIDI and found a book published in the 1980’s that got her through. Lisa is a meticulous keyboard player that knows how to turn it up and find the right texture for the song, and her role as technical lead enhances the overall sound.  Meanwhile, Iain and Jan riff over the top, play percussion, keyboards and sing. The guitars on ‘OK MAYBE OK’ are dissonant, jagged, but tightly interlocked, popping in and out- creating a very wide stereo field. And then they all start screaming.  If you need a reference point, I would describe the sound and fury of ‘OK MAYBE OK’ as the next-generation Public Image Ltd.

But I had to ask:

Lisa: (without pausing): Oh, definitely Jan. During our last session Jan would go in and nail her part in one take. Iain would take five days.

Jan: That’s only because I play the same shit over and over… (laughter all around).

The performance on ‘OK MAYBE OK’ is tight- and the vocals are at the front of the mix. At times the song sounds like it might go to shambles at any moment- but the pulsing bass and percussion hold it together and drive it forward.  And while the song starts loud and hard- it resolves in a very long fade out- as the panic dissipates and something, or someone, pulls you back from the edge.

Mega Emotion took a week-long retreat to work out the final details and arrangements for the new album, then went to Sickroom Studios, in Norfolk, for a week to record the album.  As a three-piece they’re playing with a ferocity and new-found confidence, since every song requires them to play multiple instruments while singing- which can be a challenge at live shows.  Owen Turner engineered the most recent session and he’s been a long-time collaborator with Mega Emotion. “He’s not afraid to tell us when we’re doing something stupid,” said Lisa. The mix and the sound of ‘OK MAYBE OK’ push the meters to the limit, but the sound is clear, crisp, and the layers of noisy guitar expand the sound and provide a musical equivalent to the panic in their voices.

The album- Move, Motherfucker will be out “soon-ish.” I can’t wait to hear the other tracks, because the three creative minds behind Mega Emotion totally wreck it on ‘OK MAYBE OK’.