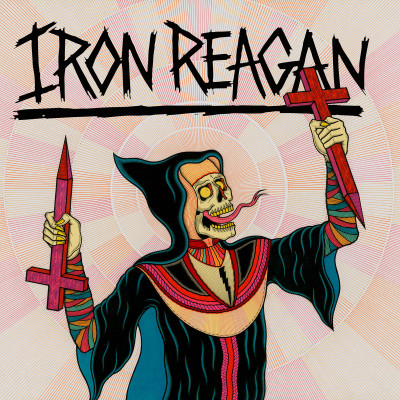 In September 2014 I reviewed Iron Reagan’s last release, The Tyranny of Will for Echoes and Dust. Today, I am super excited to share with you my review of their newest album, Crossover Ministry.

First and foremost, I love the artwork on the cover of the album. Rarely do I speak of the artwork when I do a review. Not that I don’t love album art, I just let the music speak for itself most of the time. But this cover rules. It’s bright and gets the point across – setting you up for the album. An interesting choice for a more thrashy/hardcore band. The artwork is done by David Cook aka Bonethrower.

One of the other things that I noticed right away, is that more and more of their songs are longer than usual. Of course you have your 14 and 7 seconds songs in there, but mostly they reach over the 1:50 minute mark. A little growing up from the thrash band, but a sprinkle of staying true to their roots with the in-your-face short, fast, and loud songs.

The first song ‘Dying World’ is a great way to start an album. With lyrics like “Cannot save a dying world – A dying world – No way to save a dying world” it creates the main anthem for the record, if you will. The next song goes right into some powerful drumming that backlines and another defeatist lyrical cacophony. Full of heavy guitar chords and solos for the next few songs, I know this will be an album I will listen to over and over for years to come.

Song 4 ‘Dead With My Friends’ is one of my favorites. A slow, sludgy intro goes into a punky d-beat song with some really powerful lyrics. “How long should I pretend to care?”. My favorite part of the song is the breakdowns. And if I am not mistaken, there is a point where they use a piano or keyboard to back up the guitars in the final breakdown. It gives it a super creepy-church vibe. How cool is that?

Like I said in my previous review, “Tony Foresta has great energy and keeps up with the guitars and music so well” and I would retain the same feeling, but the guitars on the album are so great! Amazing solos and such a bright, sludgy sound throughout the entire album. On ‘Crossover Ministry’ there is a short but super sweet guitar solo that is quickly ended with a breakdown. The anthem song for the entire album, complete with clapping sounds at the end. ‘More War’ quickly follows ‘Crossover Ministry’ with again, great guitars. They achieved a sound bands seek after for years. And the fact that you can hear the distorted bass in the background makes me really happy.

Song number 12 (out of 18 mind you) is called ‘Parents of Tomorrow’. I will leave it up to you to listen to…it’s a bit of comical surprise that has literally one sentence, but it comes with much hilarity. There are a few songs with guitar vocals on them, which really switches up the album. These small details make the album more complete; It gives them that funny edge without going away from a more serious political theme.

Crossover Ministry wraps up with ‘Twist Your Fate’. They pull out all the stops for this one. Mega intro with screeching guitars that almost resemble an 80’s thrash band. You can just tell, that this song live is louder than any of the others.

All in all, this is a great release by Iron Reagan. I highly recommend giving it a listen, and check them out on their upcoming tour! This is going to be an album not to miss live.