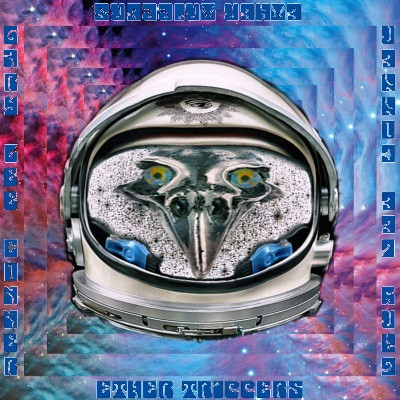 One of the most attractive elements to the Screaming Trees’ music is that, due to their decades-spanning list of influences, they always sounded different to whatever their peers and friends were up to.  To be honest, this was probably amongst the various contributory factors (that seem to also include lots of infighting and lots of drugs) that still mean to this day that they aren’t celebrated in the same sort of venerated tones that their friends and peers remain subject too.  Then again, under the radar is where all the fun things live anyway.

For guitarist and co-songwriter Gary Lee Conner, a post-Trees career has been spent largely away from publicly-releasing music, popping his head over the parapet every now and then under one guise or another but the last few years has seen a bit of a resurgence with some new music mixed in with interesting and exhaustive looks back.  Ether Trippers, released on his brother and former bandmate Van’s Strange Earth Records, is his most accomplished solo work to date, not least because he pulls in elements of what got him making records in the first place.

The song titles spread across Ether Trippers pinpoint exactly where this record is: whimsical imagery, Strawberry Alarm Clock-inspired lyrics and a bright, gentle otherness illustrate the album’s personality before a note is heard and as illustrations go, it’s a fairly accurate one.  It’s also a very busy record, with layers upon layers creating an incredibly confident end product without any extraneous sonic silliness that can crop up on more than a couple of psychedelic albums over the past half-century.

What can also be found on Ether Trippers are plenty of echoes of Gary Lee’s own past.  Peer a bit deeper beyond the mellotron and Summer of Love vocals, and you’ll find plenty of assorted snippets of Screaming Trees memories.  Not whole things, but sketches here and there where it’s easy to think “this sounds like it should be on…”, especially when the wah-wah’ed guitar hits the forefront like it does on ‘High on a Mushroom Cloud’ and the album’s title track.  Frankly, much of Side Two where the volume and tempo is ramped up and the voice shifts from Syd Barrett storytime psych to something more akin to the Trees’ own MC5/Stooges deep roots, it becomes very easy to remember that Gary Lee Conner has always been a top-notch songwriter.

It’s very much a record of two halves, but when each side – psychedelia vs. psych, if you will – is so well-balanced and crafted, it becomes a bit of a treasure trove for grunge historians and younger listeners looking for something different to brighten their day, or at least offer a different way of looking at things.