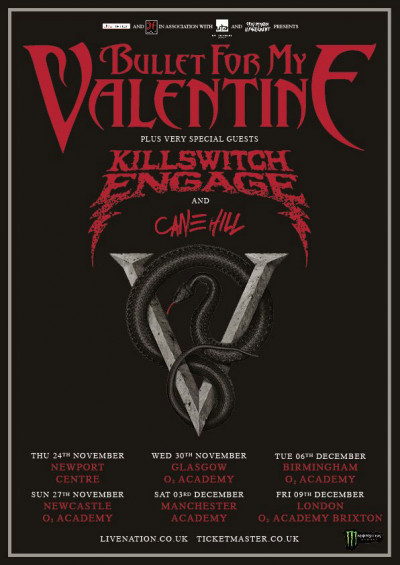 Bullet For My Valentine at Manchester Academy

Welsh metalcore band Bullet for My Valentine’s latest UK tour had already gotten quite a lot of attention from fans and from the media, partly due to the addition of fellow metalcore titans Killswitch Engage to the bill, but also because of their announcement that they intended to play their legendary debut album The Poison in full. This drew an especially positive response from their long-time fans who had an element of nostalgia to add to the run-through of what is often considered to be one of the best metal albums of the 21st century. However, fortunately for me, as someone who has never been quite so well-versed in the band’s back catalogue, tonight they were to perform a normal set-list with The Poison to be played the following evening. There appeared to be a large number there who had tickets for both nights, which certainly demonstrates how zealous many of their fans are; as does the fact that both of these nights were completely sold out.

Despite the line outside Manchester’s Academy stretching a long way down the street, the fact that opening act Cane Hill came on just after the doors first opened meant that unfortunately for them, they were playing to quite a small crowd for a large proportion of their set. It’s a bit of shame because the New Orleans four-piece really were not a bad band to see at all. Their high-energy nu-metal/metalcore fusion makes them a good choice for an opening act and they performed all their songs pretty admirably. The problem is that given the low levels of interest for Cane Hill at the start of proceedings, they were far too generic to do much to get the attention of anyone in the venue who had not already decided to head straight down to the front. Those who did were as involved as can really be expected from a relatively unknown support act, but ultimately Cane Hill were never really able to get into full flow in the way that they would have liked.

The same certainly cannot be said of Killswitch Engage however, who are arguably just as big a band as those who they were special guests to, and received a welcome from the Manchester crowd that would be fitting of a main act. The crowd’s enthusiasm was muted somewhat upon their opening song ‘Alone I Stand’, which suggests that there were still a fair few among the audience who at least were less familiar with their newer material. The band’s set did consist mostly of songs from their two most recent albums, since frontman Jesse Leach’s return to the band; but if the objective of this UK tour was to win fans over to their latest additions, then that was definitely achieved this evening. Leach was in enigmatic form throughout as Killswitch Engage motored through their 12 song set-list, with the usual silliness and rushing around that Adam D and Mike D’Antonio have made such a staple part of the band’s live experience. I doubt there were many at the end of their segment who were left in any doubt that Killswitch Engage are still an incredible live act who were quite possibly selling themselves a little short by settling for ‘special guest’ status.

Bullet For My Valentine therefore, did have a fairly tough act to follow when they finally took to the stage to the sound of ‘V’, the opening instrumental track from their 2015 album Venom, in rather smarter attire than one might expect from a metalcore band. The anticipation was therefore built nicely before the band plunged into their first song of the night, Venom’s main single ‘No Way Out’. The high tempo and thunderous rhythm of this and the songs that followed generated a lot of movement in the crowd who were very keen to show that they still had plenty left in the tank after the first two bands. After the initial excitement of the band’s appearance wore off though, I was somewhat disappointed with what they were able to offer in the way of a live performance. The fact that all members apart from their drummer contribute vocals to the performance does make for some very effective live renditions of their songs, but it makes the band very static on-stage and any attempts to rectify this during the instrumental sections feel a little forced and unnatural. They are not helped by the fact that frontman Matt Tuck’s vocals were slightly off, especially during the first half of the show when the singing of bassist Jamie Mathias compared favourably to the band’s lead singer. Tuck isn’t able to offer a great deal in terms of engaging the crowd either, though interestingly he did become a noticeably better frontman during parts where his rhythm playing wasn’t needed and he was able to just concentrate on vocals. In terms of musical aptitude, the band don’t do anything wrong, but neither are they able to accomplish anything particularly special either. Guitarist Padge is able to draw the attention of the crowd for his solos to a certain extent, but I highly doubt there was anything there that the audience had not experienced before.

For all of Bullet For My Valentine’s shortcomings, their shows are always entertaining in the sense that their songs definitely suit a live setting, and this is especially true tonight with them headlining a fairly intimate venue in front of a very zealous group of fans. This is particularly evident towards the end of the show when the bigger songs start to come along, including a few entries from ‘The Poison’, which many there would also hear the following night. However, ‘Hearts Burst Into Fire’ was a personal highlight for me because it showed the band in a different light from most of the rest of their set-list, which was not the greatest in terms of variety. Certainly this is a band who stick to a certain formula in their songs and live show, and it clearly is a winning one for the Manchester audience. I felt though, that this made for a somewhat bland performance from a band who were ultimately upstaged by their main support act. Bullet For My Valentine may have garnered a lot of enthusiasm due to their intention to play an old album, but I wonder what is next for the band if they continually struggle to impress with anything new. They did have a new song to finish off their set, the recently released ‘Don’t Need You’, which was a decent enough statement of intent, but ended up falling flat as the majority of the crowd had not yet heard it. There is a lot to be admired about Bullet For My Valentine and the fans they have, but I feel that shows like this will do little to win any new fans over to their cause.