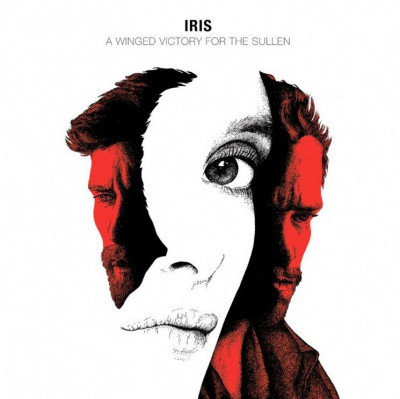 Iris by A Winged Victory For the Sullen

A new record from A Winged Victory For The Sullen is always something to get excited about, which is kind of a strange thing in itself when their whole ethos is to project a strange sort of calmness.  Dustin O’Halloran and Adam Bryanbaum Wiltzie combine their compositional skills in a way that is sympathetic both to their respective approaches and to the audience at large to create a genre that is pretty much their own; a deft blend of traditional classical composition with more than a nod to electronic integration and interpretation may seem similar on the surface to any number of artists plying their trade nowadays, but there’s just something about this pairing that sets them on a whole different plane to everyone else.

As with their previous work Atomos, this new collection is another act of interpretation.  Scoring Jalil Lespert’s Parisian thriller Iris (also released on the same day that this soundtrack was digitally available – 3-dimensional copies are released on January 13 2017) sees this collaboration work their way around another’s creation to startling effect.

The listener is gently brought into A Winged Victory For The Sullen’s aural world in typical fashion: patient orchestral sweeps that wax and wane like the Moon, an ominous and continual drone providing both tension and calm while layers are variously added and faded out almost on a subconscious level.  What sets this apart from its predecessors is that the electronic elements are given a much more obvious platform, something that becomes more evident throughout this soundtrack.

Such is A Winged Victory For The Sullen’s generally restrained practice, it’s quite a refreshing change to hear them do the exact opposite of what usually happens when artists are hired to score films and actually push their presence forward more, rather than pull things back to pastures incidental.  Fantasme has all the hallmarks of a typically beautiful AWVFTS track, but all elements are pushed firmly to the front of the piece in dramatic fashion; L’embauche and Retour en Foret both feature brutalist electronica given human tension by strings and Wiltzie’s drone guitar, the latter having that most-required of electronic soundtrack work – a John Carpenter feel – yet kept well within Adam and Dustin’s working parameters.  First-time listening proves to be quite a surprise, although it becomes quickly evident that although there’s a lot that is different here, it all fits within their greater framework and the familiar pulses and waves keep everything well-grounded while the synthesisers get a freer rein than normal.

Heading towards the back end of the album, the closing few tracks typified by Galerie and the desperately heartbreaking piano and orchestra during closing track Comme on a Dit are much more akin to what you’d expect from a Winged Victory album, although these more familiar pieces also further just how out-there these composers are and how easy it can be to take on board new ideas when they’re presented in such irresistible fashion as they are throughout Iris.

This represents another high watermark in both artist’s exemplary careers, both as part of this pairing and in their wider work.  Full of surprises to both seasoned and new fans, it’s something that everyone should have a go at listening to at least once as A Winged Victory For the Sullen’s music is simply stunning in its uniqueness and beauty.