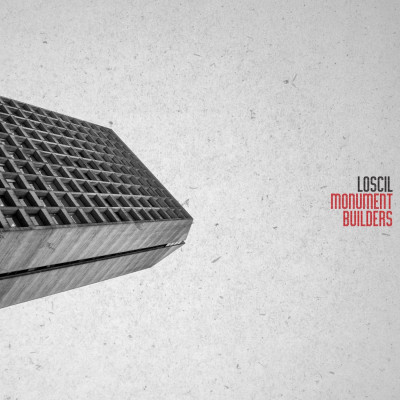 Loscil always delivers. In the field of artists such as Stars of The Lid, William Bassinski and Boards of Canada, where pretty much any given album can be played to serenade the brain and sooth the ears, Loscil is just as pretty a flower as any other. A consistently excellent artist providing ample amounts of mysterious and hypnotic music en mass, Monument Builders is a welcome addition to this lineage.

If there’s one redeeming feature of 2016 it’s that the new releases have been strong, we’ve already gotten great new stuff from Worriedabousatan and now Loscil is moving us in similar direction with cold focused electronics dominating much of the album in tracks like ‘Drained Lake’, ‘Anthropocene’ and ‘Weeds’ but what I guess sets this apart from previous Loscil albums is the deep lagoons of bassy synths that arpeggiate and croon their way throughout the album.

Soothing oscillations and rippling rhythms of bass ooze in and out of the collection boldly pulsating through ‘Red Tide’ and ‘Straw Dogs’. Stranger Things has happened and this synth way sounds is in vogue as a result, had that soundtrack not existed would this album have sounded the same, quite possibly but what’s certain is that the popularity of the show and its music will allow Monument Builders to engage with a new fanbase for Loscil whilst symbiotically welcoming them into a new world of music. This first half of the album gestates and boils brooding into bitterness before collapsing into melancholy.

‘Straw Dogs’ markedly dives into the deepest fathoms of pathos through the somber moans of aching brass instruments and the muffled abrasion of volatile drums. Always bleeding at its heart is the high pitched cry of an ambient pad. The nadir of the album is arguably found in ‘Deceiver’, its saddening electronics bathe the listener in soothing pads and apathetic keys barely staggering up from the ten count towards hope at the end of the track, as though the war has been lost and the battle is now fondly thought of only for its residence in the past. ‘Anthropocene’ continues the trend and the age of man like 2016 is filled with misery, pain, despair and death, I feel like I understand the album from this one track title, I feel like I understand the significance of a monument builder in this context; we are always trying to move forward until we stop moving and then we start looking back and what we see is that what is true for everyone is that we do and die and hope to be remembered for it, to cheat death, to have purpose, to do and die with no reason but compulsion. ‘Weeds’ grow on barren land, the dirt, the uncaring world; the flowerbed of a grave in some shit-heap, one horse town. Time passes by with no respect to human life, if the earth could talk it’d probably not even speak to us, we may as well be bacteria with a purpose we can’t even understand. Loscil plunges the listener into the meaning of these tracks by anchoring them with a tangible emotion that overwhelms the listener transfixing its audience into a cavernous atmosphere of foreboding and woe. It creates a palpable feeling of insignificance and succeeds at unraveling the album further as it draws to a close.

Monument Builders rides the synth wave to deliver a unique and cohesive post-ambient album that should feature in many album of the year lists.