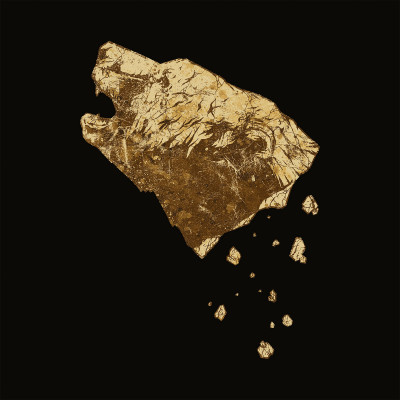 Rising from the ashes of a fire, Justin Greaves blazed through bastardisation and bullshit to create one of the most enrapturing albums of the year in Bronze. The Crippled Black Phoenix flies again!

The album opens with tones reminiscent of Justin’s work on the Futureshock 2000AD film; entitled ‘Dead Imperial Bastard’ the opening piece introduces Bronze to us as a dystopian wasteland brooding in the raised ground of a battlefield. It transmogrifies with a slow-burning impetus through warped sampling into the meteoric riffs of ‘Deviant Burials’. The track is a powerful surge of emotion boldly charging through face-melting prog rock guitar wizardry and bone-shattering stoner riffage.

In tracks like ‘No Fun’ and ‘Rotten Memories’ the album twists further and further into its strident voyage through the maelstrom of war zones and burning infernos. Each excellent progressive metal track feels like a bold, resounding charge into the pits undeterred and laughing in the face of danger. A perfect storm of impressive lead guitar work and rabid drumming. However, ’Rotten Memories’ immediately stands out as a new classic for the band, it’s the perfect blend of everything that has ever made a CBP song great but with the fierce hook of “truth becomes stranger than fiction, all the answers lead to more questions, no one’s gonna stand in your way, you’ll fight for freedom when you think for yourself” it becomes almost like an anthem for the album’s thematics.

Like it’s predecessor, ’Champions of Disturbance’ (pt 1 and pt 2) also immediately stands out as a gargantuan offering from the band; a cataclysmic eruption of razor sharp guitar work and brutalist drumming the track marches through several passages of hell to deliver a head-banging colossus befitting Ares or Mars. The song’s hook “now we set fire to the sky, sick of war and sick of fighting” captures the essence of the song’s narrative in a perfectly story-like way. I don’t think I’ve ever used the word “epic” in an album review before but, this song is epic in the truest sense of the term; it’s like a blood-stained tapestry from medieval times depicting some great war with both utter sincerity and a crushingly mournful artistic license.

The scornful nature of the album and its title all hint towards a band of soldiers fresh from battle, still stained with detritus from the maelstrom, still tormented by the damage done. ‘Goodbye Then’ is possibly the chief example of this with militant rhythms driving sad reflective vocals into the forefront whilst blades of ambience simmer overhead. The song’s title sums up the mixed emotions conveyed perfectly, it’s about self-respect and knowing that sometimes forgiveness is impossible when you have been so unjustly wronged by someone you had considered a friend. It would be like trying to heal a broken arm by simply snapping the part that remained in tact so the whole thing was fucked.

‘Turn To Stone’ takes the album into new territory, it’s a cover of a Joe Walsh track, but for some reason it reminds me of Crosby, Stills and Nash. It’s a bombastic, classic rock homage that personally, I think is vastly superior to the original. Once again it’s a track about fighting and conflict, but it’s also about perseverance and frustrations boiling over; it’s a perfect fit on an album that is in many ways about a band biting back, tired of taking shit and getting fucked around and consistently standing up for what is right in a world where so many people trick and politic their way to cheating and stealing their way to the top.

‘Scared and Alone’ is also mind-blowing, the black dog of depression and misery and betrayal forging the thematic crux. It feels like the triumph of the early tracks really turns bittersweet here like realising that you are not glad it is over anymore as that trauma is something you encountered and it is unjust and it should never happened but it did. And when a person reaches that understanding, what comes next is the realisation that no one wins, when something like that happens regardless of how it ends we all lose; ‘Winning A Losing Battle’ seems to highlight that exact feeling. Although, the power of ‘Scared and Alone’ almost make it feel like the climax to the album, it’s astonishing really how fucking good it is, the vocal performance is possibly the best on the album and considering the competition that is impressive; I’d actually call it one of the best vocal performances of the year. The fragility and strength and hopelessness and stoicism of the track all dichotomously colliding make it a uniquely awe-inspiring listen. It’s interesting because what I like about ‘Winning A Losing Battle’ is its contrasting malevolence that utilises sinister guitar work and sounds befitting old school horror to create a sense of tensions mounting and unpredictability. This atmosphere builds nicely into the album’s closing track the cinematic conclusion ‘We Are The Darkeners’.

The final song, opens with what a sample of dialogue featuring this seemingly tongue-in-cheek excerpt “it is! It’s the phoenix! I’m going into them, I’m going to hit them” delivered with a childish naivety. It’s as though, by this point in the album the band are almost laughing at the foolishness of their past foes. Anchored by triumphant brass instrumentation and a methodical, monolithic sense of doom and precision, the song is a simply incredible rebuke of the insane torrent of assholes the band has had to deal with over the years. What is perhaps surprising about it is the amount of swagger it has, although deserved, it feels like a new direction almost, each lyric is delivered like a returning hero “from the ashes rise again, I’m the will that never dies, we don’t care to play your game, burn your bridge and walk away, live to fight another day”, the result is an awesome sense of indestructibility that would feature well in film soundtracks. The hook of the track is once again another all-time peak for the band, it feels almost godlike; on a plain surveying a kingdom or the world from a great distance “’til the end of time” it beckons in an inexpressibly magnificent solo before delivering the perfect summation of the album in its chorus: “we will always be the last to fall, never fall to your dishonesty, through the ashes, through the ashes”, it’s the most glorious “fuck you” I’ve heard all year.

Dark times led Crippled Black Phoenix into the bronze age in this album with blood, wrath and progress screaming loudest it’s a band at the peak of their powers charging forwards; rising like a phoenix from the ashes of a fire, Bronze is how you bounce back. Bronze is fucking impeccable. It’s funny though, the astonishing quality and scornful opprobrium at the centre of the album also assert one thing clearly; Greaves and cohort took the gold, their detractors very much got bronze. This album is as much about those people as it is a bold statement of how great the band is now all that shit is over.