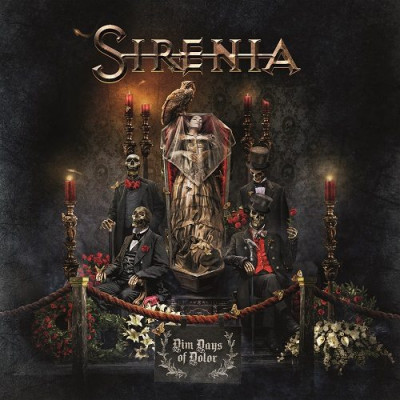 Dim Days of Dolor by Sirenia

Norway’s Sirenia have been on a roll in recent years. The early promise of their debut album, 2002’s At Sixes And Sevens, seemed for some time to have been unfulfilled; not so much because successive albums were lacking, but because the band’s momentum was perpetually upset by a string of different lead vocalists. Following the departure of vocalist Fabienne Gondamin, the band were to find new singers for each of their next few albums: 2004’s An Elixir For Existence featured Henriette Bordvik, whilst Monika Pedersen took the mic for 2007’s Nine Destinies And A Downfall, but by the time Pedersen left the band the following year, it was hard to escape the conclusion that despite guitarist, vocalist and chief songwriter Morten Veland’s best efforts, the band had thus far failed to capitalise on its potent opening statement. Change can often be the catalyst for bold forward steps from bands, but in this case the rotating cast of musicians made it feel like Veland and his band were constantly fighting fires rather than concentrating on the music.

All this changed in 2009, when Sirenia announced they had recruited the Spanish singer Ailyn and released their fourth full-length record The 13th Floor. Although Ailyn’s recruitment caused some controversy – she had appeared in the Spanish version of The X Factor, had recorded J-Pop records with her previous band Charm, and her vocal style couldn’t have been further removed from her predecessors, being much more rooted in pop than in metal or classical – she proved to be the perfect foil for Veland’s morbid, none-more-Gothic songbook. With every record, both Ailyn and the band took great strides forward. Initially sleeker and more pop-influenced, the reborn Sirenia gradually embraced more of the progressive, darker feel typical of their earlier work, and the disparate parts of Sirenia’s sound over the years were woven almost seamlessly together. Ailyn took further vocal coaching, greatly improving her vocal versatility, and Veland’s music became bolder and more adventurous. It was a slow but glorious rebirth, culminating in 2015’s wonderful The Seventh Life Path. The band’s seventh album, and Ailyn’s fourth since joining the band, it typified everything that the rejuvenated band had come to represent.

Alas, all good things come to an end, and earlier this year the band issued a statement that Ailyn and the band had, by mutual consent, gone their separate ways – although this seemed to be news to a disappointed Ailyn. The band had tour dates to fulfil, and they turned to French vocalist Emmanuelle Zoldan, who had sung on most of the band’s back catalogue as a member of the choir that rounded out their gothic, symphonic sound. Zoldan, a classically-trained opera singer, performed creditably, although her vocal style was far removed from Ailyn’s. Fast forward a few months and suddenly Sirenia’s eighth album was ready for release, with Zoldan still holding the mic. There seems little doubt that Dim Days of Dolor was being worked on for some time, and Zoldan appeared to be the final piece of the puzzle.

Happily, no matter how odd the timeline that spawned it might be, Dim Days of Dolor doesn’t suffer from the slightly directionless feel of the band’s second and third albums. Indeed, stylistically it picks up directly where The Seventh Life Path left off, and the variety of that record seems to have been largely preserved, if some of its more notable progressive tendencies have been pruned back once more. Choirs singing portentously in Latin? Check. Huge riffs? Check. Songs about insanity and mortality? Check. It is very typically a Sirenia record. There are a few concise, forthright rockers with huge, pop-influenced choruses – the galloping, kinetic title track an instant earworm, whilst the cheerfully titled ‘Treasure n’ Treason’ and the almost joyous ‘Ashes To Ashes’ provide a similar grin-inducing urgency – and more intricate pieces, such as the progressively inclined ‘The 12th Hour’, complete with sampled snatches of dialogue, languid mid-section and thunderous death metal influenced grand finale; or the expansive mini-epic ‘The Fifth Column’. Along the way there are some unexpected and welcome twists on Sirenia’s established modus operandi, such as the almost dubstep-influenced electronica in ‘Cloud Nine’, and the undertow of techno that teeters on the edge of breaking through the atmospheric sections of ‘The 12th Hour’.

Of course, much attention will be paid to Zoldan’s performance. She delivers a powerful and charismatic performance throughout, seemingly quite at ease – which perhaps shouldn’t come as a surprise given that she’s been providing the band with vocal performances for over a decade already, albeit in a somewhat different capacity. Her classical pedigree is immediately apparent, and it’s not hard to imagine that listeners who discovered Sirenia with Ailyn at the mic might find the change a difficult adjustment at first. The only problem the band might have is one of perception: Zoldan’s classical stylings are reminiscent of many other symphonic metal vocalists: obviously Nightwish’s Tarja Turunen is simultaneously the symphonic metal cliché and the yardstick by which so many vocalists working in this genre are judged against. Zoldan’s are undeniably in the same wheelhouse, which automatically now makes Sirenia sound a little less unique. This is not Zoldan’s fault, and it is to be hoped that those disillusioned with the change treat her with the respect she richly deserves based on this first showing. By the time the album closes with the ballad ‘Aeon’s Embrace’, chances are that even those who might have had misgivings about Ailyn’s departure will be cheering her on as she completes a positively heroic and affecting lead vocal. The song is sparse and ghostly after the big symphonic sound used on the rest of the album, and it takes a special kind of grit to deliver performances like this in the face of scepticism, and it’s a mark of both Zoldan’s quality and Veland’s belief in her that she pulls off a performance that is almost certain to silence all but the most trenchant critics.

Dim Days of Dolor is not perhaps the huge step forward that Sirenia’s last two albums, Perils Of The Deep Blue and The Seventh Life Path, were. However, the increasing confidence of those two records is still present, and perhaps the album’s only fault is that it is perhaps less iconoclastically individualistic than its immediate predecessors. It does, however, amply showcase the talents of the band’s new vocalist, and serves as a re-statement of Veland’s evident belief in the music he is making. For all its familiarity, there’s enough here that’s new and intriguing to hold the interest of both existing fans and new listeners alike, and that alone is no mean feat for a band that’s been around for well over a decade. For whilst the symphonic metal genre remains jammed with sound-alikes and also-rans, Sirenia still feel unique. Eight albums on, that’s nothing to be sniffed at. Sirenia have proved through their longevity and sheer determination that they are not to be underestimated, and Dim Days of Dolor is ample proof that they’ve still got plenty to say.