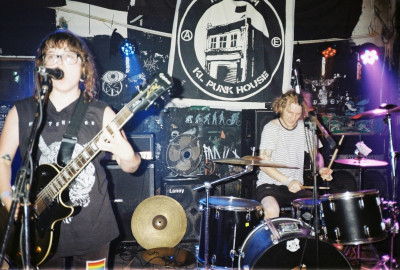 I tell myself I'm trying to shake society, but sometimes I feel it's a lost cause.

Diploid (Mariam Benjemaa – guitar/vocals, Reece Prain – bass/vocals, and Scott Mclatchie – drums) formed in Melbourne in 2011, now signed to the Art As Catharsis label their latest record “Is God Up There?” is a full bellowed Edvard Munch style scream at a world which, in 2016, rapidly seems to be going down the toilet. Stuart Benjamin caught up with Reece and Mariam for a brief Q&A about mass murder, serial killers, death, and Prince.

(((o))): Congratulations on the new album, it’s great, how easy was it to put together?

Reece: When writing this album I had an eye infection that didn’t go away for a couple of months. It was so bad that I’d have to wear sunglasses at night because any sort of light was very painful to my eyes. This also resulted in me not being able to work or drive or do very much, so I had lots of spare time to write. I wrote a lot of songs in a short period of time, Mariam and Scott also wrote a few tracks. We then just jammed and went through everything we had all written and slowly got the songs together. We wrote around 18 songs, and just picked about 15 to record.

(((o))): The general theme of the record is how people justify the terrible things they do – how did you settle on that as your theme?

Reece: Mariam and I read a lot about serial killers, mass murders, death cults, war crimes and just anything that’s really dark. We chose the theme after we watched Snowtown. The movie is about murders that occurred in Adelaide during the 90’s, it really moved me and made me feel dead for weeks, during this period of time, I really wanted to make a release that made the listener feel similar to how I felt after watching Snowtown.

Reece: It came from Nigel Cawthorne’s book House of Horrors. The book is about Josef Fritzl and his family. “Is God Up There?” is what one of his sons said when he saw the sky for the first time.

Reece: ‘People Like Hayley’ doesn’t have any lyrics. But the sample in the background is from a Louis Theroux documentary. During the sample the person being interviewed talks about how when you’re young, you just assume that life will be this amazing thing, that your dreams will come true, but unfortunately that doesn’t really happen. ‘Barrels’ is about the Snowtown murders. It’s a very interesting case, and I find it more interesting as it’s Australian and I was alive when it all happened. ‘In The Toybox’ is about a murderer who was very similar to Jigsaw from Saw. I won’t write too much about it because it’s pretty disgusting, he was very very sadistic.

(((o))): The inclusion of the infamous “Jonestown tapes” is a bold and brave move, a) what made you use it? And b) what is it about that particular event that still resonates today?

Reece: A podcast that Mariam and I enjoy, The Last Podcast On The Left, did a special episode where they just played the tape. I listened to it, and I found it to be so crushing, I felt it was just so strange people can do that sort of thing to themselves and others. We used it because we had originally decided we weren’t going to get the release physically released, just because we don’t have too much money and getting vinyl pressed is expensive. So since it was going to be digital, I didn’t see any problem with including a 45 minute sample.

I’m not religious, and grew up in a house that didn’t follow any religions, so it made it just so crazy for me that people would do this.

(((o))): Do you think it’s important to confront society – via your music – with the consequences of the things that we do?

Reece: I’m not sure if it’s important or not to be honest, sometimes I feel like it can be damaging, as it can sometimes warp you into believing the world is nothing but a bad place, but writing down history and its tragedies means we will hopefully work towards a future with less of these crimes and behaviors.

(((o))): Are you looking to shake society from its lethargy/apathy or do you think that’s a lost cause?

Reece: I usually go back and forth between the two. I tell myself I’m trying to shake society, but sometimes I feel it’s a lost cause. The recent election in America definitely backs that thought.

(((o))): You describe yourselves – or well, you’ve been described as “nihilist feminists” how does that work with two guys in the band?

Reece: Both Scott and I consider ourselves feminist, so we don’t really mind being labelled as a feminist band.

(((o))): You have this great male/female duality in the use of vocals, how did you decide to take this split singer approach? Was it something that came naturally?

Mariam: It really came naturally. I had joined Diploid just after Diploid 49’ers had broken up, I had always played guitar, but never had done any sort of vocals before, but the previous guitarist did vocals so I just starting doing it when I joined.

Reece: It was actually an influence from bands like F-Minus, Nausea and Hatred Surge. Those bands used dual male/female vocals, and we really wanted to do something like that.

Mariam: I’ve been doing collage work for a few years, it’s definitely my medium of choice. I wanted something that was evil looking, but also very feminine. While I’m a fan of skulls and horror, I do feel it’s been done to death. I’ve always enjoyed bringing lots of colour into Diploid’s artwork over the years.

(((o))): Finally, 2016 has been one of the worst years in living memory for all kinds of reasons, of all the artists and musicians that we’ve lost in 2016, who’s loss hit you hardest?

Mariam: I’m pretty cut about Prince, I have fond memories of dancing to Prince in the car with my dad. David Bowie’s death was quite sad too, especially upon hearing his last album, you know he knew he was dying.