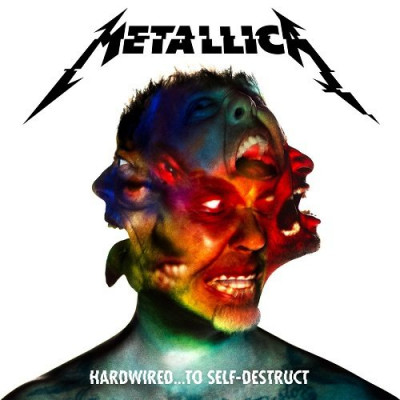 Hardwired.... To Self-Destruct by Metallica

Poor Metallica. You have to feel for them, really. The thrash giants had such a spectacular run of form in the 80s that they’ve been living in the shadow of their own work ever since. Subsequent records have appeared at increasingly long intervals, to a flurry of interest as befits a legendary band such as Metallica, but all too often to raised eyebrows from critics and long-term fans who still seem to feel that the band betrayed its thrash roots in a bid to sell more records.

Hardwired… To Self Destruct certainly starts out like it means business. The opening ‘Hardwired’ is a no-nonsense, three-minute burst of frantic thrash metal that sounds little like anything the band have served up since …And Justice For All, and is enough to capture the attention of even the most jaded fan. Machine-gun like drumming? Check – and Lars Ulrich, often criticized for sloppy playing and poor timing, sounds more precise and switched-on than he has for years. Inhumanly precise rhythm guitar? Check – and James Hetfield is in uncommonly good voice here, too, even throwing in a few juicy obscenities for good measure; it’s almost as if the band are drawing a line under their radio-friendly period and are embracing the fire and rebellion of their early days once more. Kirk Hammett’s brief solo may be a little lacklustre, but then the three-minute format of the song doesn’t lend itself to protracted guitar heroics. Robert Trujillo’s bass is a sturdy framework throughout. In short, ‘Hardwired’ is exactly what long-term fans were hoping to hear. Its position as opener is no accident, however, as the rest of the album is quite different in tone.

That’s not to say that it’s a safe record; quite the opposite, in fact. Whilst generally the band are on familiar ground here and take few risks, Hardwired… To Self-Destruct is a much more cohesive and satisfying album than anything the band have put together since Load, or quite likely even the increasingly divisive Metallica (aka The Black Album, the record that catapulted them to stadium-filling A-list status in the early 90s). Anyone who might have hoped for a return to grass-roots thrash metal is, however, going to end up disappointed.

Let’s face it, Metallica were never going to unlearn all that they learnt in the 90s. The willingness to rein in the face-melting thrash and experiment with other styles and sounds that marked their 90s output might have resulted in a subset of their fans noisily accusing the band of ‘selling out’, but the vastly increased musical palette this provided the band with has been a constant ever since, ample evidence that the band prefer a bit of diversity. The same is true of Hardwired… To Self-Destruct: there’s plenty of thrash bluster and the neutronium-heavy grinding riffs that have endeared the band to a legion of admirers over the course of their 30-plus year career, but the length of the album (slightly over 80 minutes) and the band’s tendency towards longer tracks ensures that it’s not all nosebleed-heavy throughout.

There’s not a marked difference in feel between the two discs; this is definitely an instance where the album is two discs in length, rather than two albums coincidentally packaged together. Disc one definitely wastes no time getting down to business: as well as the wiry energy of ‘Hardwired’, the muscular ‘Atlas, Rise!’ and the pleasingly anthemic ‘Moth Into Flame’ (a commentary on the self-destructive tendencies of human nature that sounds like it could have been lifted almost wholesale from 1996’s Load, were it not for the explosive solo from Hammett halfway through) are both crowd-pleasing numbers that’ll delight mosh pits across the globe. The other three tracks from the first disc are rather different in tone. ‘Dream No More’ is a slow-motion grind built around a wonderfully baleful riff, it’s Lovecraft-referencing lyric another delicious throwback to the band’s 80s heyday; a familiar device to fans who enjoyed previous Lovecraft-themed tracks ‘The Thing That Should Not Be’ and ‘The Call Of Ktulu’ (sic). It might lack the intensity of those earlier triumphs, but it’s nonetheless a welcome change of tone. The disc-closing ‘Halo On Fire’, by contrast, opens as a languid ballad before slowly building into a dervish of guitars, ending with a lengthy solo-trading ad lib that gives both Hetfield and Hammett plenty of space to melt some faces. ‘Now That We’re Dead’, the remaining track from the first disc, almost feels anticlimactic when compared with its bunk-mates, but perhaps its placement is its only real problem: taken on its own merits, it’s a robust, heads-down, mid-paced number that is perhaps a touch too long given how little it changes over its running time. Metallica know how to craft a great riff better than most, but at the same time, they are sometimes guilty of not knowing when enough is enough; a similar accusation could perhaps be made for the length of the album as a whole. All the material here is strong, but there’s probably a good case to be made that it could have been a stronger and more cohesive record still if a track or two had been saved for another release.

The second disc is comprised wholly of longer tracks: there’s none of the immediacy of ‘Hardwired’ on offer. That’s not to say there’s no thrills to be had, though: the slant-eyed menace of ‘Confusion’ makes for a memorable opener, even working in an intro and outro that sounds deliciously like a cross between earlier fan favourite ‘Ride The Lightning’ and ‘Damage, Inc’, and Metallica have rarely sounded so righteously antagonistic as they do on ‘Here Comes Revenge’, its enjoyably belligerent, bloodthirsty lyric an instant joy. Built on buzz-saw riffing of the type that any red-blooded Metallica fan will instantly delight in, it doesn’t feel as long as you might expect from its seven-minute running time.

Perhaps a little more disappointing is the rambling ‘ManUNkind’, which never really gathers as much steam as its despairingly angry lyric might seem to indicate. It does, however, feature some blistering Hammett soloing – after years of rarely getting to blaze away on new material, recently Hammett has been given much more space to make his mark, which is crucially important as often Hammett’s pyrotechnical displays are one of the chief differences between the ‘golden era’ Metallica and its more radio-friendly modern-day descendant. In this case, however, Hammett’s blur-fingered interlude is the most memorable thing about the track in question, which perhaps isn’t a good thing. Similarly underwhelming is ‘Am I Savage?’, a case of a few glorious riffs stretched drum skin-tight over six and a half minutes: enjoyable enough while it’s happening but lacking in the intensity on display elsewhere.

Happily, the album checks out on a much stronger note: ‘Murder One’ – a tribute of sorts to friend and inspiration Lemmy Kilmister of Motörhead – opens suspiciously like ‘Welcome Home (Sanitarium)’, but develops into a churning black cloud of riffs with one of Hetfield’s finest vocals on the album sitting atop it. It’s mid-paced, but wields the same kind of ominous power that ‘Sad But True’ wielded back in 1991. Better yet is the album closer, ‘Spit Out The Bone’, which is about as close to the classic thrash sound of early 80s Metallica as the band ever get on the album. Another lengthy track, it moves effortlessly from a frantic ‘Battery’-style opening through several gear changes, to close with a breathless percussive assault that will have old-school fans grinning from ear to ear. Clearly Metallica are still more than capable of serving up stuff like this when it suits them: it’s just that it suits them a little less often. Perhaps the jaded fans who just want the band to repeat their early triumphs ad nauseam would be well-advised to reflect on how they might feel in the band’s place. Thirty years on, who can blame the band for wanting to change things up a bit now and again?

Metallica have clearly invested a lot of time and energy in this record, and after a lengthy gap since 2008’s Death Magnetic it seems churlish to complain that Hardwired… To Self-Destruct is not all it could have been. Purely on a production and mastering level, it sounds better than any Metallica albums since at least Load, possibly even further back than that; the mastering issues that blighted Death Magnetic are definitely a thing of the past. The material is all strong, although sometimes the band still have a tendency to flog ideas to death: whether this is just a fatal attraction for The Riff or an inability to self-edit, it’s hard to say, although Metallica have often tended to write lengthy songs. Every member of the band sounds energised; Ulrich’s drums and Hetfield’s vocals in particular are much improved on recent releases, and Hammett’s return to more extensive soloing lends the whole affair a great deal more character. Trujillo’s playing is reliably impressive throughout, ensuring that things never get messy when things speed up and anchoring the slower pieces to earth with an impressive solidity.

In short, you couldn’t wish that the Metallica of 2016 sounded more energised and focused than they do here. Evidently some fans will wish that the album was filled with songs like ‘Hardwired’ and ‘Spit Out The Bone’, but right back to Ride The Lightning, the band were always about much more than speed. Perhaps its time that the thrash purists got used to the idea. For now, the band and their fans should embrace Hardwired… To Self-Destruct. It is perhaps overlong; some of the tracks might have been edited slightly and lost little or nothing in the process. However, Metallica still know their way around a riff like few others, and the band are on excellent form. This is a hugely enjoyable album from a veteran band who clearly have their eyes set on the road ahead whilst being at peace with their illustrious past.