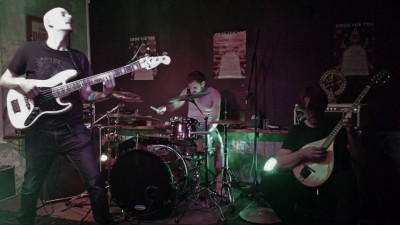 There are many amazing bands doing incredible things, but I personally think that the best ones are usually the ones who are tapping into that strange, primal nature of music that we can’t really explain, and I think it’s that thing that connects people and keeps them interested in music.

Lachlan Dale, Cameron Macdonald, and Evan McGregor from Hashshashin talk to Stuart Benjamin about the evolution of the band, the Art As Catharsis label, and – of course – their cracking new album nihsahshsaH. [Photo credit: Leigh Hawkins, used with permission from the band].

(((o))): What inspired the choice of band name and the mirror reverse album title?

Lachlan: It seems silly, but I’ve always liked looking at words as pure symbols. While I was considering what sort of project I’d like to be involved in, one reference I had was SSAHHA – a Brooklyn-based band who play with North African musical traditions. (Some people might know them through Dawn Of Midi, who they share a drummer with.)

The word ‘Hashshashin’ had something of that symmetry or repetition to it. The reversal for the album name flowed from the same idea.

I also appreciate the cultural allusions of the word ‘Hashshashin’. Orientalist historical myths told of a group of terrifying, hash-addled assassins. There is no evidence such a group existed, and the misconception seems to be rooted the mishearing of another term. We recognise we sit outside the musical traditions that we draw influence from, so referencing that orientalist myth seemed appropriate.

The word has been also used in a derogatory way variously referring to a disreputable individual, hash eaters/smokers, or just a general noisy rabble – again, pretty fitting.

(((o))): We’re really impressed with the new album, how would you describe it? Stoner? Psych? Desert Rock? Or something else entirely?

Evan: If I had to describe it to someone I would say something like “heavy progressive rock with psychedelic, experimental, drone and Middle Eastern/Oriental influences.”

(((o))): What were the main musical influences that the band brought to the record?

Evan: For me some bands that have probably subconsciously influenced me in my playing in this band are Dawn Of Midi, Meshuggah, Earth, Tigran Hamasyan, Tool, The Mars Volta, Twelve Tone Diamonds, Bohren Und Der Club Of Gore, Estradasphere, Physics House Band, Zun Zun Egui, Schnellertollermeier, Alarmist, Don Caballero, Flying Ibex and a lot of others that I can’t think of right now.

Lachlan: Evan has covered a lot of the basics when it comes to prog, but you can probably hear some of our roots, too – doom, post-metal, and what used to be called ‘mathcore’. We’re all into Botch, Neurosis, and The Dillinger Escape Plan.

I’ve also got a strong interest in religious music that is meditative and droning. I’ve slowly been absorbing music from Tibet, Sufi traditions, North Africa, the Middle East, mainland India and so on – artists like Phurpa, Mdou Moctar and Le Trio Joubran.

(((o))): For me the album was like a song-cycle, something you could repeat in a loop, which in its own way is a very primal, spiritual, indigenous approach – was that the intention?

Evan: I’m not sure to what degree that was intentional, but by being influenced by some of these tribal, primal qualities like drone/repetition/psychedelia, those qualities will naturally manifest in other ways within the album too, so naturally the whole album will somewhat represent and reflect the smaller details.

Lachlan: We were conscious of trying to put together an album that flowed from start to finish. It needed a meta-narrative, in terms of what the songs evoked, and how they were named. We didn’t conceive of nihsahshsaH as a legitimate cycle, but certainly tried to fit our songs into something of the kind after they were written. I’m glad the trick seemed to work.

(((o))): Tell us about the field recording elements on Hashshashin, I believe you picked these up as part of your trip to Nepal?

Lachlan: I spent four months earlier this year travelling around Nepal and the mountains of India. I was drawn to Tibetan villages and temples, as well as religious festivals like Maha Shivaratri in Pashuputinath, and Bisket Jatra in Bhaktapur.

I recorded anything that sounded remotely interesting. Some of the recordings you hear on the album include two old men chanting in the ancient mud-walled town of Kagbeni in Lower Mustang, a group of Tibetan women praying at Boudhanath, an amazing Gurung wedding at Bindhyabasini, and the deep, droning intonations of monks at Ranka Monastery, Sikkim.

I’m a little sad we didn’t use the recording I took at Gyuto Monastery in Dharamshala, or Thiksey Monastery in Ladakh, but they should all eventually see the light of day. I’ve been slowly uploading the whole collection to my Soundcloud account, and might release them as a stand-alone collection in the future.

(((o))): Do you think we’ve lost a connection to the transformative, spiritual side of music in Western culture?

Evan: I think that is self-evident if you just look at the purposes of music across different cultures. The simple fact that there are countless traditional cultures who primarily use music directly as a spiritual tool, or a way of connecting to something deeper within themselves, their people, nature or their environment, and to go beyond the self.

For the most part, mainstream western music seems to be the complete antithesis of that- primarily concerned with personal goal-oriented behaviour; with fame and fortune seeming to be the default assumed intention of musicians. Traditionally, music came from a much deeper, more humble and mysterious place, but has since been commodified, highly personalised and diluted in many ways.

There are many amazing bands doing incredible things, but I personally think that the best ones are usually the ones who are tapping into that strange, primal nature of music that we can’t really explain, and I think it’s that thing that connects people and keeps them interested in music. And if that’s the thing you’re calling ‘spiritual’ then I say yes to your question!

(((o))): What other lessons did you learn – musical, meditative, or otherwise from the Nepal trip?

Lachlan: I’d considered making that trip for a long time. The idea formed almost a decade ago.

Giving myself time to step back and consider my life was incredibly rewarding. I learnt that my brain works far better than I had realised. I found myself happier when I had time to read and write – and that I don’t really need a lot of my possessions.

The trip was a vindication for what I had been feeling and thinking for a long time. It helped me realise that many of the things we take to be fixed and immovable are actually extremely malleable. We get so used to things in our little pocket of the earth that we forget there are other ways of being in the world. Coming back to my life in Sydney’s inner city seemed so unreal.

Now that I have a better idea of how life could be, I feel irritated that I’ve returned to so many of my former habits. That longer term change will take time.

When it came to local religions, I felt I couldn’t connect with much of what was going on around me in India and Nepal. There were a few exceptions – particularly with some of the Tibetan Buddhist pujas – but overall I found myself more connected to scientific rationalism than I expected. I was more likely to interpret my experience in terms of psychology than metaphysics. While concepts like secular Buddhism interest me, I just can’t engage with the animist and spiritualist myths that are tied up in the Tibetan schools.

(((o))): Does Hashshashin use an improvisation method for music – like Kurushimi’s ‘Violence in Action’ method?

Lachlan: No. At least for nihsahshsaH, most of our songs are quite structured. We are trying to move away from that prescriptive writing style, and open up a more fluid and organic approach to compositions – but that is a challenge for our next release.

Cam: For me beyond touring and cool shows, definitely working towards another album.

Evan: In terms of music, I always like to strive towards something more challenging, not necessarily more complex or technical, but just whatever it is that motivates me and pushes us to explore our potential beyond what we’ve already done.

I also like to try different approaches to songwriting and different ways of facilitating creativity, but it’s important to me to always be directed by inspiration and not by extrinsic factors. In practical terms, that involves immersing myself in diverse music, and being open to new things and going with whatever feels right during the songwriting process.

Lachlan: I brought home an Indian classical instrument, a Dilruba, which I would like to bring to Hashshashin. I see this band as an excuse to indulge my interests and push myself. I’d like us to keep up our momentum and work towards another release in 2017.

(((o))): While we have you here, we couldn’t resist asking a couple of questions about your record label. Art As Catharsis Records has an impressive roster of bands right now, and in our opinion – not a duff act among them. How do you pick the bands for the Art As Catharsis label and how do you exercise quality control?

Lachlan: The label is generally an extension of my own taste, so I guess that end up being the mechanism for quality control. I need to pace myself a little better – particularly now that I’m both undertaking a Masters of Creative Writing, and back at full time work.

(((o))): What would you say is your biggest challenge for the label at present?

Lachlan: Time. I can only do so much – and that isn’t quite good enough for me. I want to be able to invest more time, money and energy into the label to help the Australian underground flourish.

(((o))): Are there plans for any of the Art As Catharsis acts to come to the UK?

Lachlan: We Lost The Sea will be in Europe mid-2017. Hopefully they are the first of many.

(((o))): What can we expect from Art As Catharsis in 2017? In particular is there anything new from Serious Beak next year?

Lachlan: Adrift For Days will be releasing a new album in 2017 – that should be quite fun.

Serious Beak are on a hiatus at the moment, but we’ll probably look to get back together and create some new music together at some point in the new year.

I’ve heard rumour that Brian Campeau might have a new release coming up. As for the rest – I think we both might just have to wait and see.

(((o))): Sander – our hard-pressed Metal Editor – would like to know whatever happened to Battle Pope?

Lachlan: Every individual in that band died of alcohol poisoning. Sad perhaps, but for the best.