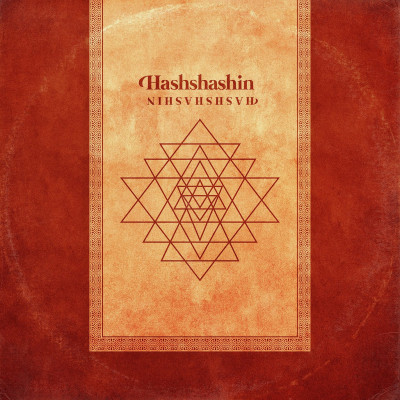 Taking their name from a mysterious Islamic sect that dates back to the time of The Crusades, Hashshashin is – for want of a better description – a Middle-Eastern inspired three-piece psychedelic stoner rock band from Australia (and if that ain’t World Music, I don’t know what is), featuring Lachlan Dale (bouzouki, guitars, field recordings), Cameron Macdonald (bass), and Evan McGregor (drums, percussion, didgeridoo), all of whom you may have encountered already if you’ve been keeping up with the experimental Aussie prog-rock scene (and why wouldn’t you be) in bands such as Serious Beak, Five Star Prison Cell, Squat Club …and so the list goes on. Lachlan himself is head honcho and label owner of Art As Catharsis Records, so this may well be a case of poacher-turned-gamekeeper, and you gentle reader, can decide which way round you’d like that to be.

nihsahshsaH is probably one of the finest stoner rock albums I’ve heard in some considerable time, and you should try it out for size too. Like all Art As Catharsis releases it’s on a free initial download for the whole thing – but do consider sending them a few Aussie dollars so that they can keep releasing work of this quality. It certainly rates with all the big US desert rock bands, your Kyusses, your Fu Manchus, your Mondo Generators, but brings a wider international focus and feel to the music rather than driving around in circles on an open top truck in the High Desert. It’s a cultural thing, the US tends to be (but is not exclusively so) very inward looking, culturally, while the Australians tend to be (but not exclusively so) more outward looking. If you think I’m wrong – you’re free to suggest any US World Music rock bands that you I should check out.

So, nihsahshsaH draws not only on conventional rock structures but from native, Aboriginal Australian traditions, Nepalese musical traditions and those, as I mentioned at the top, from the Middle-East. This is, in part due to the choice of musical instruments employed by the band, also in part due to Lachlan Dale’s sojourn to Nepal in mid-2016. Given this global focus, the record has that feel of discovery and freshness that’s often missing from a lot of rock music. It draws on that same sense of discovery of when, say, Brian Jones from The Rolling Stones recorded the music of The Master Musicians of Joujouka, with his reel-to-reel tape machine in a smoky tent.

The album, however, isn’t a genteel examination of different cultures – there’s still a rock band at the core – and on the whole, the music is powerful and muscular and ranges from full on psychedelic rock-outs to fully hypnotising drone. Often ragged and cathartic, this is, in its own way, soul music, music that taps into a primal, tribal, part of our consciousness that we, in our too comfortable Western civilisation, rarely draw from.

I tended to look on this album not as a grouping together of nine songs, but rather an entire song cycle. This isn’t to say that the tracks don’t work in isolation – far from it – but if you listen to the whole thing all the way through (or indeed several times on repeat) you will really get a sense of the spiritualism, which is inherent in native or indigenous music, and upon which this band so expertly draws. Such music is, in a mystical sense, transformative, a gateway from one state to another. The song titles also draw on themes redolent of transformative states – ‘Immolation’, ‘Ascention’, ‘Rebirth’.

Religions all over the world still do this – use music as a vehicle to know the divine, and parallel to this, the link between narcotics and music in relation to a state of mind is well documented. At the centre of this mix we have an Australian band who call themselves after a group of people who – as the legend tells us – used hashish to work themselves into a state of religious fervour as part of their sect culture. It is no accident then, that nihsahshsaH is so endlessly hypnotic and beguiling.

But above all else this album is great fun, from the thunderous psychedelic explosions of ‘The Ascetic’ and ‘Immolation’, through to the laconic slow pulse of ‘Disintegration’, there’s never a dull moment or anything that feels remotely like filler. The use of bouzouki in particular adds a compelling dimension to the raw sound of the band. Something else all good desert rock albums must have is grooves – and you’ll find plenty here that fill you with the compulsion to get on your feet and move thanks to Macdonald’s skull pounding bass. The rhythm section are particularly strong throughout, McGregor clearly treating drumming as some kind of martial art, pummelling everything into submission. It’s a shame that we’re probably a long way from seeing them in the flesh here in the UK.

The production has an unfussy, off-the cuff quality, perhaps to give us a sense that these could be field recordings, and that the band just stepped in from the dusty twilight mountains to be recorded. Anyway, ‘Immolation’ and ‘Moksha’ are head-above-shoulders the stand out tracks for me, but my guess is if you have any feeling for psych at all, you’ll lap up the whole damn lot of it. I loved it.