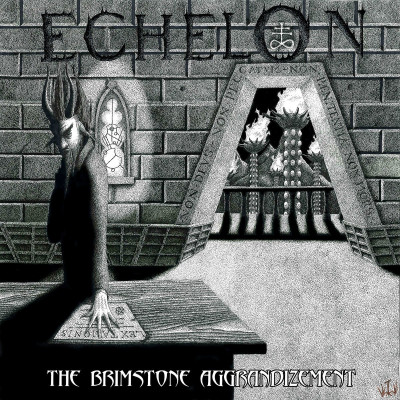 The Brimstone Aggrandizement by Echelon

Boasting a line-up of Dave Ingram, Rogga Johansson, Johan Berglund, Kjetil Lynghaug and Travis Rico, connoisseurs of death metal will be under no illusion as to the pedigree of Echelon, but sometimes illusions can be just that. Not in this case though as the self-proclaimed OSDM devotees deliver an album which, whilst digging into that nostalgic feel, also manages to be on of the most vital and exciting metal releases of the year.

With an understanding that death metal is not just about brutality, but also that all important “groove”, Echelon straddle the line between the in your face USA/UK style and the more melodic Swedish strain. That they manage to do this without overdoing any aspect and keeping a sense of fun is simply testament to the prowess of the musicianship on show here.

The supercharged riff of ‘Plague Of The Altruistic’ is the perfect start as its steady build introduces a band ready to take on all comers. This is just a taster of what is to come though as its guitars play off each other, first delivering a riff and then a more measured solo, all the time keeping time with the tremendous blast beats. As the album progresses these key music themes become integral to the delivery.

The epic melodic death metal of ‘Lex Talionis’, its title meaning an eye for an eye, is an uncompromising moment yet within all the majestic music is a clean production, which accentuates every instrument and vocal moment. Even the samples, used sparingly and to great effect throughout the album, leap out at you and drag you into the stormy music.

Other stand out moments on this excellent album are the intense drum thrills of ‘Of Warlocks And Wolves’, which balance out the classic metal riffs more in line with Iron Maiden than Obituary, with a fine sense of schlock lyrics about good vs evil. The title track uses melody to push the song forward as does the almost over the top ‘Monsters In The Gene Pool’, which sounds exactly like its title implies. The best though, is ‘The Feared Religion’, which pushes brutality to the fore mixing colossal riffs with perfectly executed solos.

There’s a great sense of B-Movie fun about this album too as the final minutes of the album are taken up by a surprise appearance from one of our most famous sci-fi characters showing the band really do understand the essence behind the genre. It ties in perfectly with the nostalgic feel too, which the band have been keen to recognise. It’s great nostalgia though and not one that grates with time.

For an album steeped in old school death metal tropes, there is nothing here which sounds forced or false. Yes, there are obvious homages, but these are done on purpose. Echelon have delivered an album which is unashamedly old school and it works wonderfully well. It’s an album which stands tall amongst its influences, but also lays open a path for other bands to follow. Supergroups are usually a frightening thing, here the only thing frightening is the thought that they may not make a follow up album. Let’s hope they do!

Listen to the track ‘Of Warlocks And Wolves’ exclusively here: