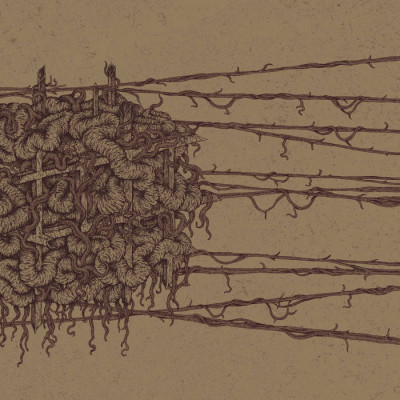 Black and Forward by Dreare

Usually before a review, especially a band I don’t know a fair bit of research goes in. It’s often helpful to know the band’s experience, age, location and really, what makes them tick. Now I struggled here, almost all social media is in in Czech! As much as a life-saver Google Translate is, nuance of language is not its strong point. So, this is a review based upon purely the music alone.

Post-rock and metal can often be accused, sometimes quite rightly, as predictable. Some people insist that it’s just, building to a huge dramatic crescendo. Now, that’s all well and good, to a point. The reality, for me at least, is that this is an area where expression and creativity is incredible and diverse. Recently, there are bands that don’t follow either the aforementioned convention nor do they even follow of hierarchy of instruments e.g. bass and drums keep the rhythm and guitars are there for the voicing and melody. Dreare are a band where instruments swap places, sometimes coming to the fore, sometimes vanishing to the back and sometimes all coming together.

‘Fibre’ has slow, atmospheric and moody start. The tracks starts to layer to all of a sudden drop back to a very Tool-esqe bass. Bearing in mind what I said earlier, I was expecting the usual crescendo. Instead I got an unusual and refreshing change of pattern. The track has a slight uncomfortable and dissonant feeling.

‘Liquid’ starts with a similar feelings to the how the  last track ended. The drummer, evidently a talented and free-flowing musician adds that feeling. The guitar, which joining mid-way, adds and builds on it. Some wonderful, heavy, doom laden chord changes suddenly swamp the previous well balanced track, so a great effect. ‘Never Ceasing’ is a track opens with a scratchy, edgy phrase. The bass, deep and resonant adding a counterpoint. The track peaks and troughs with some sections very sparse. The instruments bounce and reflect of each other, sometimes in sync sonically and sometimes at odds with one another. The track, clocking in at over 6 minutes is never boring, it carries you along, never repetitive despite the sparse nature of it in places.

‘Botu’ contains huge chunky, angular, almost metallic chords. This time the bass taking a back seat and the main guitar coming forward. The song retains the feeling of early tracks but instead using a heavy, deep and percussive bass and guitar. Which both build to a heavy and dramatic ending. The last track, ‘Sad Gigant’, starts with a single cymbal crash, and continues with periodic drums and feedback. Not starting to fill out until well over the three minute mark. The bass and drums mesh incredibly well, swapping between a simple beat and more complex bass-line and visa versa. Followed by guitar and bass meshing and the drums allowed some freedom. The track and the album finishing in an undramatic fashion.

Blank and Forward is dark, atmospheric, sometimes sparse, sometimes heavy, never predictable. I advise to get some headphones, lie in a darkened room and immerse yourself in it.