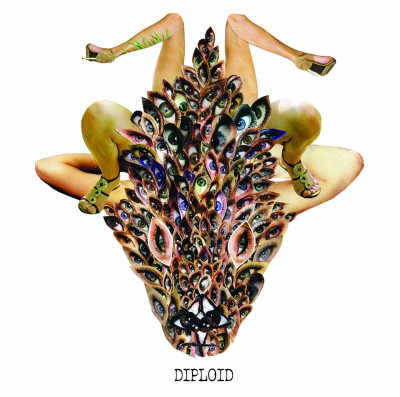 "Is God Up There?" by Diploid

Right, we’re promised screamo on the tin and screamo is what we get frankly. Art As Catharsis Records have a number of bands on the roster that have – for various reasons – weaponised their music: Kurushimi, Fat Guy Wears Mystic Wolf Shirt, and now we can add Diploid to the list with “Is God Up There?” A gloriously cathartic primal purgative scream of a release that will challenge and unsettle you long after the record has finished.

The music on this record is designed to be uncomfortable, both to your ears and also to your psyche. Each track takes as its subject a tragic event – usually where one human has done something unspeakably awful to another human – and considers the justification that these people give for the things that they do, and in particular how people normalise often horrifying and abhorrent actions in their own minds. The parallel, of course, is in the music, played at no less than light-speed, and accompanied by some of the most fervour filled screaming and screeching you’ll hear outside of a death metal singalong.

We must also mention the male/female duality of the vocals, provided here by Mariam Benjemaa and Reece Prain – I’ve heard a lot of screamed vocals in my time, but Diploid are head and shoulders above most of it. Through the vocals and music the band become some kind of unstoppably monstrous avenging hermaphrodite – rather like the curious amalgam of legs and eyes that glare at you from the record’s cover. A reckoning is come and made flesh it would seem.

The punishing grind of the record is split into two parts – the first half taken up with the album proper, while the second – well, we’ll get onto the second bit in a moment – but let’s take the first half to begin with in all its pitch-black gallows darkness. Here you’ll find eleven challenging songs, only one of which breaches the three minute mark. It put me very much in mind of early Napalm Death, with very much the same kind of political agenda to boot. The vocals of Benjemaa and Prain we’ve already mentioned, but they also provide bass and guitar duties respectively. Along with third band member drummer Scott Mclatchie these nihilistic Melbournites play some of the most compulsive grindcore you’ll hear this year. It’s not so much that the music is face-melting, rather more face-ripping, but you’ll enjoy the short blasts of tracks such as ‘Wuornos’, ‘The Mother’, and the fantastic ‘In the Toybox’, as well as the longer compositions such as ‘People Like Hayley’, and the album opener ‘Barrels’ all of which crunch down on your body as effectively as the heavy broken-glass encrusted boots of a team of angry riot-police trying to destroy a wasp nest.

The second half of the album comes from one of those chance moments which crop up when you least expect them. The band had originally intended the record to go out as a digital only release, but when the opportunity arose to put out “Is God Up There?” as a special cassette release something was required to fill side two.

Side two (or the second half), ‘Is God Up There?’, is taken up with a recording of the final moments of the residents of The People’s Temple Agricultural Project – or “Jonestown”, Guyana – named after its founder the Reverend Jim Jones, and the location of one of the most notorious mass cult suicides of the Twentieth Century. Over 900 people died at Jonestown, a third of that number where children. I won’t go into the details as these can be found by anyone with access to a library or the internet.

Jim Jones preached a heady mix of social-libertarianism, communism, and Christianity, and by the time we get to the recording, the whole movement was on a seemingly unstoppable path to self destruction. Jones, embattled, in ill health both physically and mentally, paranoid and riven with perceived conspiracies against him, quietly and convincingly argues with his congregation about the desperate path they must take.

But in some ways it feels right that this is on the album, an album where we need to be confronted with not only humanity’s actions but the steps taken to “make it right” in our eyes. And what I think makes it worse – what perhaps Diploid are trying to address – is that this cycle of horror and justification goes on: from Romans hurling Christian’s to the lions, from men burning women at the stake in the 1600s, to jet fighters carpet bombing Syria – action-consequence-justification continues. When an individual does it, we call them sick, mad, a psychopath; when governments do it, we call it policy.

Though I won’t listen to that part of the record again if I can help it, I thought the band had made a bold, brave decision in including it. What I will listen to again though, is the first half of the album, which is more than worthy of revisiting. Every now and then we need a record to challenge us and for me in 2016, with all the notoriety that this year has wrought, this album is the one to do it.